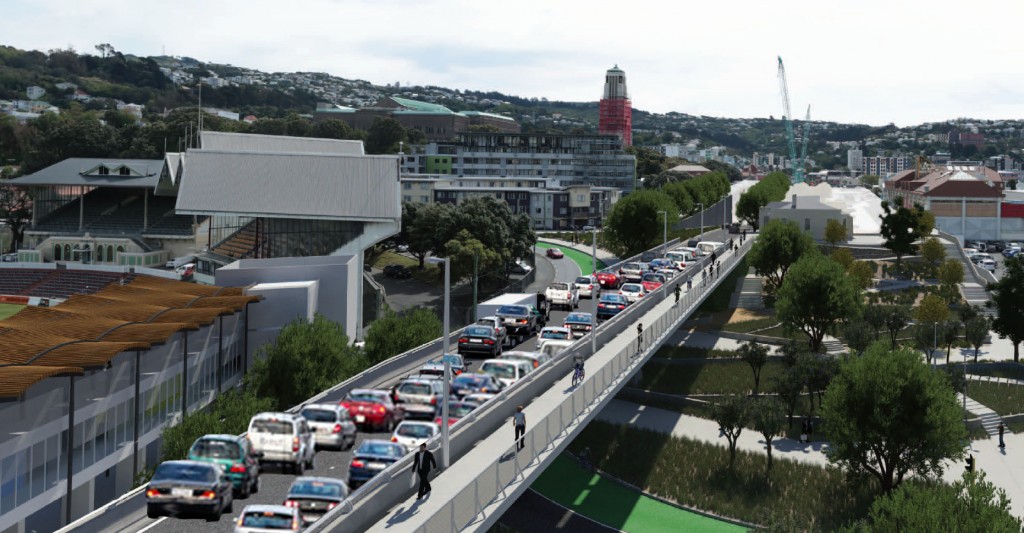 The official Board of Inquiry report is due out on the 22nd July, but I wouldnt hold your breath if you think there is going to be anything radically different coming out of it. So, rather than waiting another day to have my suspicions confirmed, I’m going public today with an Eye of the Fish prediction: the Flyover will be approved tomorrow. I’d be more than happy to be proved wrong, but sadly, I think my prediction will be the obvious, pro-government, pro-roading lobby, pro-NZTA option A Bridge.

Not much of a surprise here really – the answer to the Basin Reserve traffic problem was always going to be a Flyover, as far as NZTA were concerned – and we all know that what NZTA wants, NZTA gets. The plan for the Flyover has been on the books since the days of the De Leuw Cathers report of the 1960s, and it hasn’t really budged since – about the only difference is that instead of going straight across the Basin Reserve at high level, they are now sneaking the Flyover past around the outside edge at a slightly lower level, in the hope that the International Cricket Council won’t delete the Basin Reserve from the list of top notch places to watch cricket.

Of the lengthy report to be issued by the Board of Inquiry tomorrow, there will of course be a large number of conditions, but nothing really that hadn’t been expected. The Eye of the Fish made a series of predictions a couple of months back when the hearing finished – were we right? In fact, I’m going to make some more predictions and even provide some answers too.
Flyover to go ahead – yes, of course.
Northern Gateway Building to be confirmed at 55m – right on that one too.
Green screen to be deleted – no, sadly, the Board hasn’t had the balls to say Balls to this most stupid of ideas, although I’m still fairly confident that it will either not get built, or will fall down over time – either way, it’s still a disaster of design.
Building under the Bridge – despite it’s Hobbit-like naming, it still gets the go ahead – it has to, it is a key part of the strategy to hide this goddam awful shitty Flyover from view as much as possible. Good luck with that!

No doubt there will be more conditions in the BoI report, which itself is quite lengthy, and has to be to try and justify the endless drivel of the Inquiry itself, which went on and on for more than is humanly possible to endure. As we noted at the time, the Inquiry was severely disappointing with it’s lack of investigation into the real issues – like how come NZTA were never sprung on how come they had blatantly lied and rigged the costings over the project and the alternative schemes put forward? Or why they don’t do the logical thing of implementing Richard Reid’s BRREO scheme in the mean time, just to see if it does indeed solve any traffic issues while we wait for the tunnels to be started?

At the end of the day, we all know that this scheme as it stands, is not going to solve the traffic snarl ups between the airport and the motorway. Yes, ultimately it will free up traffic to and from Newtown, zipping up and down Adelaide Road in a more carefree manner, but we all know that effect was not the primary aim for this – nobody in NZTA really gives a toss about Newtown. The primary aim, is of course for Government ministers to be able to catch flight NZ461 from Wellington to Auckland in time as soon as the House adjourns each night. And we also all know that this speed up of the traffic is not going to happen at all, until the second Mt Vic tunnel and motorway through Haitaitai is completed, zooming down the Road of National Party Significance.

So the big question that really counts therefore, is – will the Board of Inquiry link the two schemes together? There was a lot of discussion at the BoI about whether the cost-benefit analysis for the Basin works should include the Mt Vic Tunnel works as well, seeing as the traffic improvements were treated liberally wherever NZTA wanted to. Arguing at one minute that the Flyover was a stand-alone project, and the next minute that the benefits were shared with the tunnel, the whole scheme was fairly hopelessly presented by NZTA, trying, and no doubt succeeding to have a bob each way on the outcome. We did manage to find out that of the projected – what was it? 9 minutes of traffic saving? that only 90 seconds was attributable to the Bridge, while the majority of the rest of the savings were due either to the second tunnel (not built yet), or to the mysterious third lane in the Buckle St underpass (which is also not in this project, but, like the grumpy old Creche of Compassion, it seems to have been swept up and become part of the project anyway).