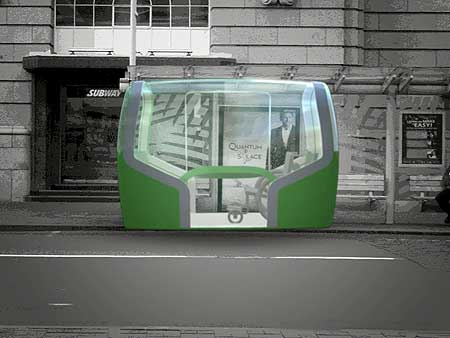 It’s times like this that I feel quite sorry for Aucklanders. Not only are they having the mutha of all political conglomerations shoved down their necks without so much as a by-your-leave, and not only are they being stung with governance by 7 quangos over which they will have no control, and not only do they have an incoherent waterfront and no sign of fixing it, and not only do they have the prospect of John Banks lording it over them yet again, but they also have the prospect of Pods invading their space.

Yes, I know that we’re all in Wellington (or Wellywood, or Wetaville, or Your Name Here Wood – did we tell you that we were the first ones to break that story – back in November? Did we? Did we? Did we?) and the Jafas are up in Dorkland, so really we shouldn’t have to worry about them, but honestly, I do worry, sometimes. I mean – it’s not that hard to get a city going right, and especially with one in such a beautiful setting as Auckland – how could they get it all so wrong?

There’s nothing wrong with the prospect of a super city, but to do it with a Royal Inquiry and then change the recommendations within a week just reeks of corruption. The poison yellow dwarf can take a bow for that. What’s the point of democracy and due process if Rodney Hide just ignores the lot?

To get Auckland governed with 7 quangos is silly as well, but to permit them to run with no public input is just lunacy and asking for trouble. Why aren’t they marching in the streets up there yet? In typical Auckland fashion they are blaming it on “Wellington” – good grief! Rodney Hide is not “Wellington” at all – he’s pure Evil ACT, which is about as “Auckland” as you can get.

And the debacle over the nasty stoush on the waterfront shows no sign of abating just yet. Want to know why the architectural profession showed no backbone when Mike Lee and John Banks were hacking down the architects designs? Having a leader of the NZIA as one of the contenders, hamstrung by ‘conflicts of interest’ didn’t help much now, did it? Where was the voice of the architectural profession when they needed it? What a PR disaster, for Auckland, and for Architects, but most of all for Auckland Architecture.

But the biggest laugh of all came last night on Campbell Live, where he interviewed a very friendly german guy working for Massey Design School in Auckland, with a wildly mis-guided proposal for ‘Slim Ride’ Pods to solve Auckland’s traffic woes. Oh no.

“The technology is more closely related to roller coaster systems than to classic rail technology, making it an inexpensive, low-tech option that’s easy to build, operate and maintain locally,” he says. “To operate in Auckland’s infrastructure limitations, the track is planned to be extremely slim, a hybrid between a ground and above ground – around fence height – sections and based on an inline-rail layout.”

Mr Neuland came up with the design after doing field research on the city’s often-maligned bus and train system. Many people shunned public transport because of its bad image, considering it unreliable, confusing and risky, he says. “The confusing patchwork of individual bus lanes sharing the congested road corridors does not help make public transport more inviting,” he says in a report on his design, recently published in the journal of the Railway Interiors Expo in November in Cologne, where he presented his concept.

As well as improving transport for commuters, he envisages Slim Ride could also add kudos to the city as a unique transport of mode for tourists. He has been in discussions with Maori artists regarding artwork to give the cabins added character and aesthetic appeal. “Instead of offering a cold, technical and vandal- proof interior, the design creates a ‘lounge’ atmosphere, clearly differentiating it from Auckland buses’ poor image. Research suggests that appealing aesthetic design is less liable to be attacked by hooligans.”

Every time the traffic gets tough, the Pods get going. A few years ago in Wellington, there was a wild raving Pod Caster here, promising to solve the city’s public transport problems with a proposal to run Personal Automated Transit devices through Wellington. If I recall correctly, there was a raging argument going on at the WellUrban website (yes, I know, we miss it too…) between the Pro-Podders and the Anti--Pods. And most amusing it all was too, for someone on the outside. Now, this time, someone (one Olly Neuland?) has reinvented the – well, wheel, or wheeled vehicle, by proposing the Pods as an example of sensible commuting.

In answer, to quote one of the many detractors of such a system: “The concept of personal transport ‘pods’ is yawningly familiar. The infrastructure would be MIND-BOGGLINGLY expensive. In short this is well-meaning but unoriginal and ludicrously, laughably expensive.” That’s exactly right. The scheme is so totally unfeasible it’s a wonder that Neuland agreed for it to be published – but then again, he’s at a University, and stuck in Albany to boot, so its no wonder he’s going a little stir crazy. Wellurban puts this all so much better than I can, so I’ll just quote the relevant part of his comments:

“For example, the promoters claim a capacity eight times that of buses and four times light rail. But this seems to be based upon the unrealistic assumptions that the pods would always be full and that they could run three seconds apart at 40km/h. If you’re promoting this on the basis of not having to ride with strangers, then imagine how much more uncomfortable it would be to be stuck in a tiny pod with them than in a bus! So 2 people per pod seems like a more reasonable average. Also, running pods that close together wouldn’t allow for safe stopping distances: a more sceptical analysis suggests that 15 seconds is a more realistic headway. Thus, their capacities seem to be inflated by a factor of about ten, and any advantage over more proven modes disappears.”