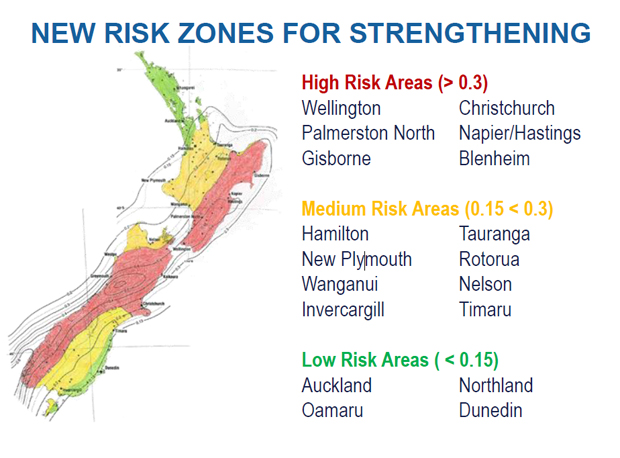 The rules for strengthening time-tables may be relaxed, but I’m not sure if I am… I’m not sure if this the result of a carefully planned out Government policy, or if it is just Nick Smith blowing off steam: the two seem closely related. The way that the media report it, the policy seems to have just arrived out of thin air, but actually, I suspect it is a result of lots and lots of thorough number-crunching by some bods from Stats, and an engineer or two down at Mobie central.

This useful, colourful little map will be highly important in the years to come – it nearly relates exactly to the old NZ EQ zones, i think, but seems to have extended a bubble of influence over towards the devastated Christchurch. Wellington, Napier, Gisborne, and the whole of the Southern Alps zone, of course, gets branded as the danger zone. Auckland, Northland, and a thin sliver of the west coast of the South Island gets let off the hook for a few more years. The time table associated with this is long – I’m posting up 3 chunks of info.

Top the list is not, actually, Wellington, but Otira. Home of the Gorge of the same name – but I didn’t even know there was a town associated with that. I presume that there is in fact only a relative handful of buildings there. A bit further down the list, we can see the time scale start to be lengthened out:

And then of course, there is the bottom of the table – the places that time forgot – or rather, the places that can smugly put this on the back burner for another quart of a century or more. Time enough for us to figure out how we are going to afford this.