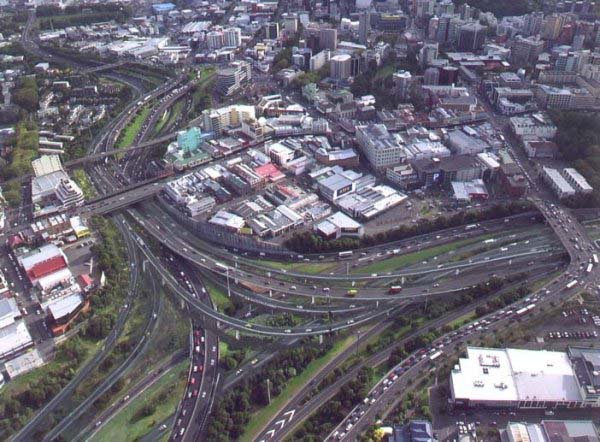 I finally posted my first blog entry here just a short while ago, but it’s been a long time in the making. Â Maximus had been pushing me to write for sometime, and I’d have some ideas, but I kept asking myself “what intelligent, compelling insight am I going to bring to the reader?”

Then I recalled something told to all writers – stick to what you know. Â Now that’s not to say I can’t do intelligent, compelling insight, but I have a whole other part of my life, called work, which requires that. Â My greatest skill is daydreaming. Â Sometimes grandiose and outrageous, sometimes of a smaller and more possible nature – and I’ve decided to use my voice on this blog to torture you all with my notions.

So today’s entry started out as a comment over in this post http://eyeofthefish.org/the-year-ahead/ and while I suggested in jest, I just thought I’d try it out. Â So I say Stop The Flyover!

The premise is that we’re doing our transport plan exactly backwards. Â It has been based on the process of getting from Ngauranga Gorge Â to the Airport, hence the official name “Ngauranga to Wellington AirportÂ Corridor Plan” (link to the pdf for those who feel like rereading it). Â So in the name of getting cars, people, trucks, goods, etc to the airport we have built the bypass, will build another terrace tunnel, build the basin flyover, build a second tunnel at mt. vic, and no doubt some point Â in the future – turning Ruahine drive into some divided highway/motorway.

Now I know I’m not the first person to suggest that maybe, the airport is just in the damn wrong place. Â Only problem is where to put an airport in our hilly terrain. Â I’ve only been here going on 6 years, but i’ve read of plans linking a new airport out in the flatlands somewhere (wairarap or kapiti) with a high speed train. Â Certainly possible, but not an ideal situation I think. Â First the jobs and services that allow the airport to function would move out of the city, and only contribute to sprawl in new areas. Â  Â Of course the Wellington airport is where it is for a reason, it’s the only flat land in the immediate area. Â The Hutt valley once would have provided a nice flat bid of land for a large airport, but unless we’re willing to relocate tens of thousands of people to accommodate a larger airport (longer runways).

And the need for a larger airport is real – a longer runway is necessary for the long haul flights, which if Wellington ever wants to have international flights to anywhere other than Australia and a few pacific islands, is necessary. Â Also, businesses increasingly make their decisions about locations about flight availability. Â A few years back Boeing moved its corporate headquarters from Seattle to Chicago. Â Boeing was the whole reason Seattle even existed as anything other than a backwater forestry town. Â The problem for Boeing was that Seattle’s airport was not conveniently located and with enough air service to allow their execs the ability to do business in a timely and competitive way.

But, none of this really matters, because this is ultimately about daydreaming.

So here is our dilemma.

As the shape of the bays indicate, work has been done to accommodate some lengthening of the runways. Â And a bit of historical trivia for those of you who weren’t aware – the original airport in Rongotai had the runway running in the transverse direction. Â So we are in a better situation that we could be.

It seems to me that our airport is clearly in the wrong location – and there are two related infrastructure problems. Â There are the limitations to the airport itself, and the accommodating transport problems. Â Well, if the issue is travel from Ngauranga Gorge to the airport, I say move the airport to the gorge. Â My proposal though is to look to look at the examples of several other similarly situated cities, and reclaim the harbour edge. Â I see that working generally like this:

So, this takes the existing size of the airport and through a few rotations and mirroring, places it into the side of the harbour, leaving an edge similar to waterloo quay. Â This would retain the access for the ferry and cruise ships. Â Now, since is the existing size of the airport, we may need to think a bit bigger. Â So I dutifully grabbed several airports from similar situations, ensure accuracy of scale and have tested them in the location.

For comparison, this is what we would need if we were to be competitive with Auckland.

Now, what you’ll notice is that just for placement I have used our relatively straight natural harbour edge (the fault line – which we’ll address/conveniently cover over later) for alignment with the reclaimed harbour edge. Â This is to show the relative size in the least obtrusive way, but obviously something of this would be arranged quite differently.

So that’s great! Â We could reclaim a bit of the harbour, and provide an airport that could rival auckland with the ability to cater to aircraft of all sizes.

But what if that’s not enough? Â In this scenario we are still limited to one runway. Â There is no way you can be a global airport with just one runway. Â Let’s see what some of our air traffic competitors have done to solve this problem.

Here is San Francisco airport, which has reclaimed the harbour several times (and it’s a very contentious issue). Â Interestingly, San Francisco’s situation parallels our own – squeezed in between motorway and the water. Â I do have a feeling that the passage between the point by Kau Bay (sorry I don’t know the name of the point) and the airport wouldn’t be passable for most of our larger ships.

Here we get two runways, in a bit more compact shape, which may be due to the fact the site is 100% reclaimed land. Â With its shared similar topographical and transport problems, Hong Kong International Airport is an interesting case study for this daydream.

So, using the Hong Kong model perhaps we could become a real international airline hub. Â But what if we wanted a THIRD? Â Here isÂ Tokyo’s Haneda Airport which manages to get three runways into reclaimed are of the harbour.

We’re not exactly leaving much of the Wellington side of the harbour, certainly not enough to be a working harbour and definitely not enough play space for us fishes.

So here’s my unrealistic proposal:

So to show some notion of reality, I acknowledge that Wellington is a one runway kind of town. Â Preferrably a longer one, so that we can take our long Â jaunts around the globe without transferring through Auckland. Â The light orange shows the basic size of a longer runway, terminal space and associated services (DHL, car rental, maintenance, private aviation, etc). Â The darker orange shows the potential for upgraded transport spine, compactly tying the train station, larger cruise ship terminal, ferry terminal, airport, and auto transport into one hub.

Now in my incomplete and superficial addressing of the obvious faultline issue – Through staging of the reclamation with new airport construction, an upgraded seismic upgrades could be addressed so that we could get supplies into the city in the event of an earthquake. Â I say this with my years of experience as soils engineer specialising in seismic zones.

So here’s the perfect solution. Â No need to build the flyover, or the two new tunnels. Â The only questions is what to do with the old airport and the existing new international terminal…..