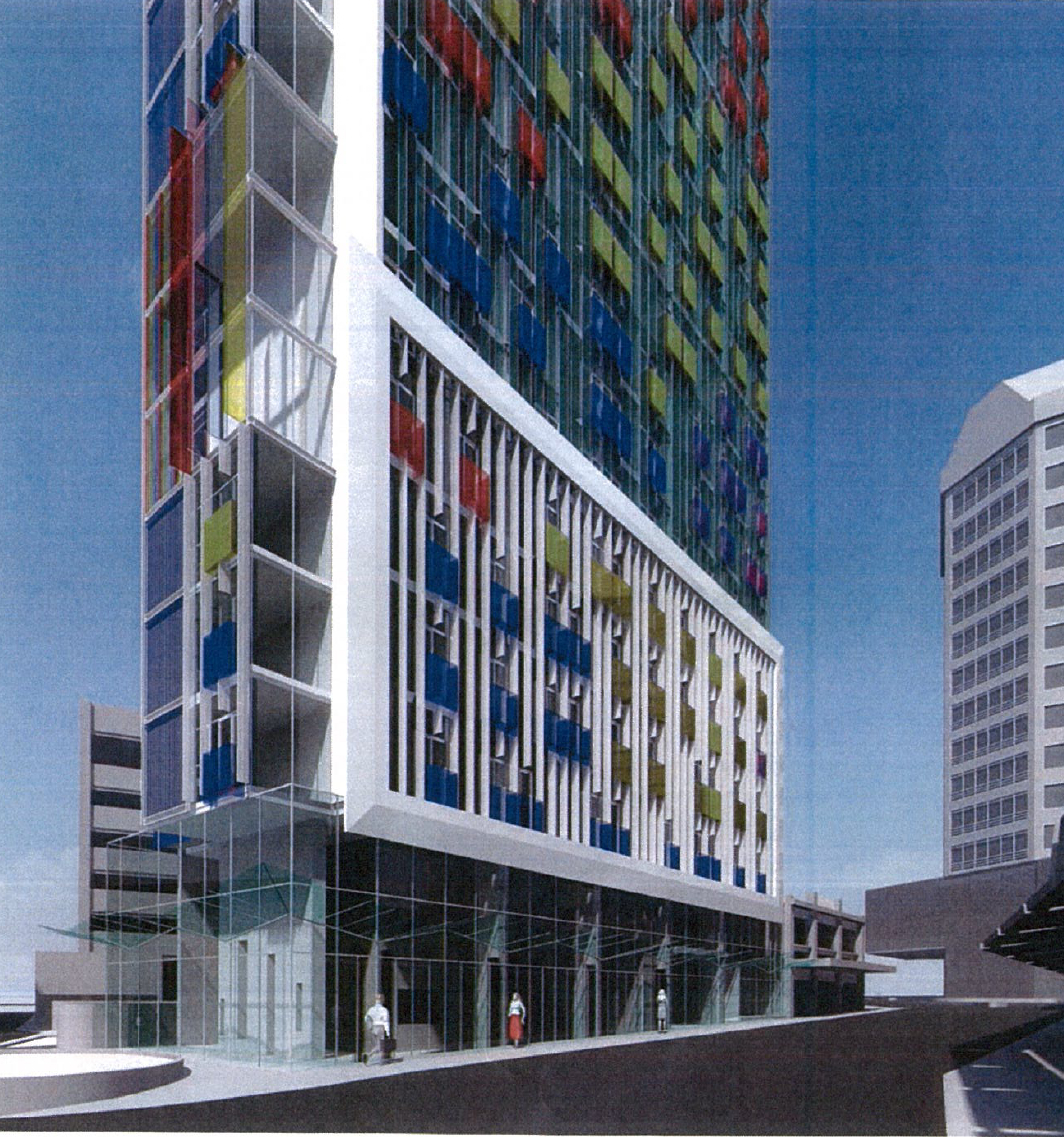 In contrast to the Stalla building proposed for lower Taranaki St, just a few days before that was announced, another building appeared in the property press, bound for Victoria St. This other building, seemingly only known as 101 Victoria St at present, is higher though – double the height in fact – yes, not 11, but a cool 22 storeys high. Interestingly, that’s still about 5m short of the height limit in the Victoria St “high city” height limit. Still, as it reaches for the stars, I’m going to christen it Stellar. I hope they don’t mind.

The two buildings certainly make quite a contrast. Each has its good points, and each has its bad points – neither is fatally flawed, but each does have some oddities, at least in some aspects.

While the Stalla building sits back from the road, hiding in the carpark behind the heritage facade of the old Taranaki St Police station, the Stellar tower sits smack bang on the edge of the road at Victoria St, rather uncomfortably – next to the worst pocket park in Wellington, pigeon-pooh splattered and crowded in by haggard smokers and haunted coffee addicts, the site nonetheless has proved to a popular place to sit in the sun. Time to move on buddy: there ain’t no sunshine when this building has gone in the way. 22 solid stories of shadow right there – casting a shade over the bus-laned remnants of Manners Mall. There was a building proposed here a few years back, the Columbard perhaps? which looked like it had gone away, but this time it is back with a vengeance. At present of course there is nothing much there, just a curiously non-descript old brothel who seem to have moved on recently, as their Fleur-de-lis sign has been scraped off the window (don’t tell me you never knew – anywhere that doorways hang enticingly open, is an unspoken invitation to have a peek around…). Anyway, moving swiftly onwards, yes, that’s the site.

Although I guess there is nothing we can do about it, Victoria St is one of those unloved bastard roads that has been forced through the cracks and crevices of old Wellington’s back streets, and to be honest, the street doesn’t really doesn’t fit the city very well. The corner that this tall tower sits on/near – as we all know – has to be just about the worst intersection in Wellington, for both pedestrians and drivers alike. The road kinks uncomfortably, there are two pedestrian crossings right next to each other – if ever there was a street crossing that the traffic engineers at the Council needed to address, this would be it. But no. Even after the recent Mall redesign, this intersection is still bad and looks like it will need another redesign one day. As such, it therefore seems slightly perverse to put such a tall, permanent building up on a site so close to this intersection, with an ensuing need for thousands of extra people movements each day and as far as can be seen, not a single carpark for the building. Of course, there is a carparking building just nearby, so no parking of cars is really necessary on site, but there should be stop-offs for taxis galore as this building is going to get busy.

There is a pretty wonderful render of the coloured glass facade panels projecting out from the facade, and an indication that these will play coloured light patterns over the facade, but I suspect these are not going to play coloured patterns of light over Manners St – which would certainly be quite a nice effect to have if possible.

Wouldn’t it be a lovely city if buildings infiltrated the public realm by colouring our streets and footpaths with coloured shafts of light? How much nicer would Manners Maul be if the concrete pavers were coloured with light rather than just dappled with chewing gum? I certainly hope that these renders are right in terms of translucency of the glass facade, rather than opaque panels that would then flatten the facade – but to be realistic, coloured glass on this scale is hard to get. It’s probably just a thin plastic film, which means it would be weak and anaemic by comparison – maybe the architects, Stephenson & Turner, could confirm to us what they plan to use.

So: lots of little apartments on the site, all facing due west, overlooking the roof of the ASB and onto the side of the green tiled ex-Telecom building. It’s not going to be a bad view, it’ll certainly be a busy one, but make no mistake – this building will stand out. Not just for the racy coloured glass panels on the facade, but also because of the height – it really is going to be about twice the height of any of its tall neighbours. The tower is to be, apparently, mostly a series of “serviced apartments”, which is a different type of servicing than previously went on at this site. Calling them “apartments”, however, seems to be stretching the truth a little – for the most part in this tower, the rooms are so damn small that you’ll not be having much of a chance of a decent servicing going on in there: the lower floors, putting it plainly, have units which are seem more than a little on the small side. Perhaps they should be called tiny hotel rooms instead.

I think that “tiny” is the word I’m searching for here. It could also be miniscule, minimal, minute, or minging, but let’s just stick with tiny for now, and have a look at it further:

Yes, that sure is tiny – there’s room for a double bed, and if you hold your breath, you might be able to squeeze round to the other side of the room to admire the view from the tiny balcony, and there’s a bathroom, and something almost the size of a half/quarter of a kitchen, and there’s room for a…. no, hold on – that’s about it. There may be a kitchen bench here, but there is not much room to actually sit down and eat. You could get one chair in there somewhere, but that’s it. No room to have a friend around to stay – unless you get straight into bed. Which I guess is a great chat-up line anyway. No sofa, no wardrobe, no desk, and on the plans, no chair and no table – no life, really. No point, really, either. Still, at least you will be able to stand on the balcony, smoke, admire the view and then toss your butts onto those tiny people’s heads far below. Mind you, even then, the balconies are so small that you may not be able to turn around to go back inside. Maybe you’ll just want to jump straight off.

Actually, if I delve back to the earlier Columbard website, we can see that there is room indeed in the units, for what is called a “Sleeping Studio”. They’re so proud of it, the words Sleeping Studio is even a Registered Trademark. Here’s a 3d picture, looking amazingly similar to the plans we see here.

Hmmm. As you can see, there is indeed a solitary chair, a table barely 500mm square, a tiny rack of shelves on the wall (no books necessary here, you’ll just watch a tiny tv), and one solitary ghostly figure standing next to a bed with one solitary ghostly pillow. This is minimal living at its most extreme.

Further up the building the rooms do get bigger – from level 19 on up they do reach twice the size, but that’s still therefore about 17 floors of apartments where it is too small for even Paris Hilton’s chihuahua to live in. I’m sorry, but this is a big mistake – you just can’t kennel people up like that in a giant slab of building, no matter how prettily packaged, and not expect problems with cooped up behaviour. Battery hens spring to mind, or caged sow-pens. Perhaps the term “serviced apartments” is another euphemism for a brothel, although at (rapid calculation) 221 rooms, this would be the biggest brothel in Wellington by a long way. As a comparison, even these double size apartments are not even near the size of the apartments at Stalla just a couple of blocks away. Suddenly, the Taranaki St proposed block seems to be almost luxurious by comparison – here, so you can compare, is one of those apartments in the Stalla.

Now that’s an apartment. 50m2 of space, including bathroom, wardrobe, sofa, coffee table, one solitary armchair, and – ooh, that’s adventurous, room for 4 people round for dinner. You can certainly imagine people living in the Stalla apartment block, even without the sea views, but for the life of me, I just can’t imagine anyone living in 101 Victoria St. You could stay one night, or two, but much longer, and you’d go mad, surely. I’m cautious about the idea that humans can live in small flats as long as they are well designed – we’ve probably all seen this masterpiece of architecture and engineering in Hong Kong – (click here for full article) – by architect Gary Chang, where he installed 24 different layouts to his apartment within 344 sq feet (32 m2).

Sheer unfolding brilliance! Chang’s 32 m2 is about as small as anyone should have to live in – although with a clever design like his, you’re never going to get tired of living there. But these “” rooms in 101 Victoria – they’re not that clever. It would be worse than a goldfish stuck in a fish bowl. For me, it’s Sorry! Just not big enough to live in.