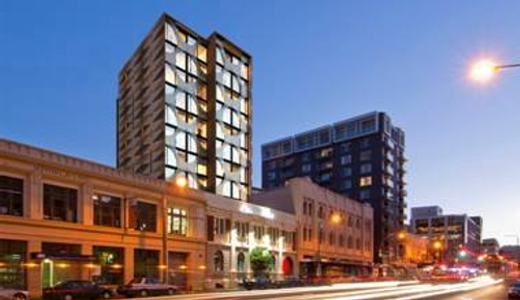 Well, I was about to post something up on the tall tower proposal for the corner of Manners St, when this little number popped its head above the parapet, and it got me thinking.

It is the latest proposal for Wellington – and no point debating it, because it has already been granted Resource Consent, without having to ask the public, despite being over 30% higher than the “permitted height”. “Is that really so? How could that be?” I mused to myself, as I stretched my fishy tail and swam downstairs to the mailbox to read my copy of the Post for all of the Dominion (did you know that we are still a Dominion? Not a colony, or a federation, or, some would argue, even a sovereign state, but still just a Dominion?). And therein, I did espy me a tale of fishy goings on in the planning department.

“Restaurant and building owner Adam Newell said Auckland’s Legacy Corporation had obtained consent for an 11-storey block to be built on a small parcel of land behind Zibibbo. ….Legacy Corporation director Gary Gordon said ….A resource consent had been obtained and, provided a sufficient number of apartments were sold in advance, construction would start late this year. The $25million Stalla development would include 60 one- and two-bedroom apartments. Design elements, including an aluminium sheathing facade and coloured panels, enabled the project to achieve a design excellence standard that allowed the building to be 30 per cent higher than provided for under the district plan….”

But I’m getting ahead of myself there, as one so often does when one is chasing ones own tail. A few years ago now, right when we were just little fishes chasing after a good tale, we posted an article about the Bellagio and the Barrio, or some such story. The building now known as Bellagio had just arisen, with a curiously appended couple of floors atop, taking it to well above the height level that it is meant to be. In front of it was meant to be another building, blocking the view, and looking out over the city. It was to look something like this:

Anyhow, as it happens, there was a world economic collapse, and America lost all the world’s money, and Greece and Iceland sank below the waves of the great Eurosea without a trace, and discrete little Barrios also descended without much effort beneath the waves of the financial tsunami that was about to engulf us all (too soon? My apologies). And now, 3 years later, the Stalla apartment block arises in its place on the presumed site of the aforementioned Barrio, only it is taller and – well – odder.

It appears to be focused in a westward direction – despite there being a good sea view nearby to the north, so perhaps it is not on the same site that the Barrio was to be on. It is by an Auckland/Christchurch/Aussie development company, not known for anything resembling quality in their work so far to date. Most curiously, it is clad on its north facade in a pattern of harlequin diamonds, and to the west it appears to be donning an oversized version of a string vest, perhaps reminiscent of one of those plastic bottle holders that penguins get their heads stuck in. All in all, rather odd for a building design. Certainly, even odder that a design such as this gets afforded a few extra floors by reason of “design excellence” – a much over-used phrase that has lost all grips with reality. If anyone can tell us more about this building, the architects, or the project, then please contact us at: contact @ eyeofthefish dot org because we’re interested to know.

Update: fresh from the stalla.co.nz website, here is a picture of the supposed view from this apartment block.
Caution: sorry to say it, but the view you see here is only available for 1-2 of the apartments per floor. What you will actually see from the majority of apartment windows is, in the foreground, the side of the carparking building and the roof of the Santa Fe strip club / Auto workshop. Beyond that you will get nice views of the city. And if they had a balcony on those other facades, you would be able to stick your head around the corner and see a glimpse of the sea. But so if you want a sea view – this is the one!

Lastly, but not leastly, here is a copy of the plans of this unit, hot off the press and just waiting to be published on the Fish: