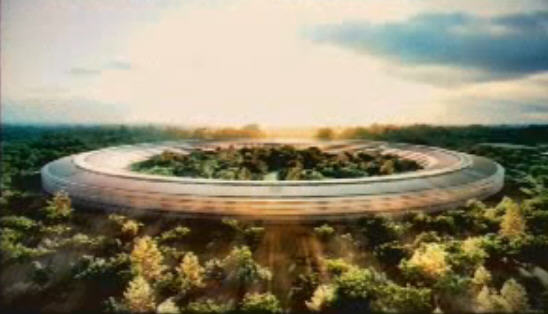 If you’re stuck in boring meetings at the Council all day long in Wellington, then my commiserations. Those hearings can get a little long and tedious.

Imagine then, if your day was perked up by a personal visit from Steve Jobs, CEO of Apple, who on Tuesday 7 June popped into his local Council office in Cupertino, California, to present the plans for a new office campus in the town. Given that Jobs, on just the previous day, had greeted 5000 of the Apple evangelistas at the annual web developer’s conference, and launched the new iPhone software, new iCloud software, and unleashed the Lion onto the Mac faithful; and considering that the guy is still looking painfully thin due to his battle with pancreatic cancer, it was intriguing to see him stand up before the small Council committee and explain his scheme for a new office campus.

Jobs explained that due to Hewlett-Packard downsizing, he had been able to purchase 150 acres of land – basically a large chunk of it now asphalted carparks and tired office campus buildings un-needed by HP, and Apple planned to rip it all out and start again.

Mr Jobs’ presentation to the Council was almost as unflappable and steadily paced as the presentations he does to the Mac faithful that fill the Moscone Centre, and was filled with similar short and pithy facts about how much better Apple campus 2.0 was going to be compared to HP 1.0 and I think he may well be entirely right.

Combined with a reduction of asphalt by 90% and an increase of landscaping form 20% of the current site to 80%, the new building is going to be a giant torus shape – a doughnut for you Dunkin fans out there. The building will hold up to 12,000 to 13,000 people, and is “3.1 million sq feet” in area – that’s about 288,000 m2 and spread out over 4 floors, equals a massive 72,000 m2 per floor. The Mayor of Cupertino (where Apple has been based at, since, forever), was fair gushing with excitement, although some of the other Councillors asked the usual stupid layperson comments like: are there going to be fire exits, or will you give the town free WiFi (as Jobs says: we pay taxes, and you do the WiFi. But if you want, we could skip the taxes and give you free WiFi instead).

The Apple company is apparently currently spread all over the town in bits and pieces of offices, and wants to concentrate their workforce on just a couple of sites – they are still going to keep the existing office campus at 1 Infinite Loop, and then build this one just a few blocks away. Carparks will be reduced, and be underground. Bicycles and clean-burning natural gas buses are also part of the Apple dream, due to be opened in 2015. The Mayor called the building the most elegant head quarters in the US, while Jobs, with characteristic understated eloquence, said that he thought it might just be the best office building in the world.

The building is circular in plan, and even for such big floor plates, the windows are going to be from curved glass as well. Jobs very carefully did not mention who the architects were – you might assume that they would be the same architects as the Apple Stores (Cywinski Jackson or something like that), but there are strong rumours going around that the building is designed by another shaven headed poloneck wearer as well: have a gander at this link. Is it? Could it be true?