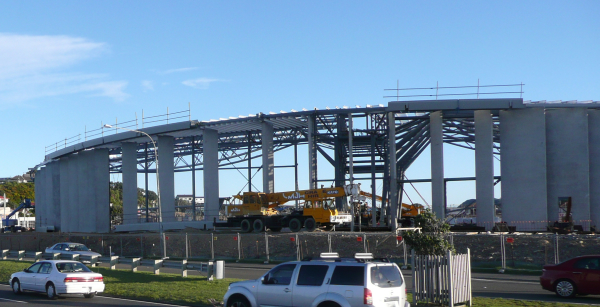 Following on, in a timely sort of manner, and because the Wellington wind has gone away and left us with some perfect walking / swimming / photo-taking weather, I thought it would be nice to have a look at the roof of the new Indoor Sports Stadium in Wellington.

Most of you will have been sweeping past in your fast little cars, getting a sneaky sideways glimpse at the building while still trying to position yourself for the optimal angle at the roundabout. It is, as can be seen, a building designed to be seen at speed – and best navigated as a passenger rather than as a driver. Keep your eyes on the road, keep your hands on the wheel… Its even harder if you try to take a photo while you’re driving, so instead I took some time out to walk round and see the site from all sides.

Large precast concrete fins are arrayed in a concertina manner around the perimeter. There is, as you have noticed, a gorgeous fresnell effect type thing going on, from dark to light as the sun plays across the frontage, with the gill-like blades of the facade fanning out across the view.

Close up on those concrete panels, we can just make out a mysterious rectangular recess along the front edge of the fins, that must be there for some future purpose, perhaps a recess zone for slotting in a shiny metal edge strip, or something. Anybody have any idea what that is for? Anybody?

I’m not quite sure how the inside of the building works – are we going to be able to see inside, and the insiders see out, or are they going to be cordoned off, and this end just a casual sports cafe with great view of motorway and Evans Bay? I suspect they will be marooned inside, away from the glare (and the view too, unfortunately), lit only by vast skylights or giant pendant fittings.

There is, if you go round the outside, round the outside (yes, like a Buffalo Girl), a fantastic view of the structural machinations going on inside. As the concrete fins are obscuring the view from the north, and as the cranes move back into the hinterland of Rongotai / Kilbirnie, the full splendour of the roof is being unveiled. Just check out this steelwork, carefully fanning out of the steel support columns in an eccentrically loaded pair of cranked legs to pick up the roof trusses.

Engineers SKM and Architects Tennant Brown – who ever is responsible for the design of those tied legs – they look fantastic. Mainzeal of course also deserve to take a bow for their work so far – it is proceeding at pace – and whoever is building that steelwork too – it looks great. The interior of this building will really be interesting to be in. I may even have to take up an Indoor Sport.

What a pity that the Stadium people are all so sporty mad and won’t allow anyone else in there for other events. How incredibly dull and boring – while the central pillars do mean that it will never be that suited to a rock concert, it could certainly be useful for a myriad of other events. One of the more surprising things to come out of the whole Andy Foster public notification of the Stadium thing, was the traffic report at the time. Traffic Engineers, as optimistic as they are, concluded that there would be no adverse effects on the traffic in the area. Effects would be de minimus. So far, without the 300 / 500 school children using this space, they’re right. Give it some time once it opens, and we’ll see who is right then!

Anyway, politics aside, it is even more interesting to see at this stage is the roof structure itself. If this building doesn’t win every steelwork award in the country over the next year or two, I’ll eat my own tail. It is especially nice to see the steelwork at this stage of the job, before the roof goes on and spoils our outside view. But the array of trusses show the layout of the Stadium and the way the two sides of the courts are roofed over by these massive trusses.

While there are any number of possible aquatic precedents for this building (and, while we’re talking aquatic, how much more interesting is this building than the strained ugly hunchback of the Kilbirnie Aquatic Centre!), such as a manta ray gently undulating its way across the Miramar peninsular, I have to say that most of all it reminds me of the salmon swimming upstream on their way to spawn. Mmmm, spawning….

But best of all, of course, is that the type of truss they are featuring is called a Fish-Belly truss, fso named for its gentle swelling and sagging undercarriage. I’m so honoured that the architects / engineers have so clearly set the structure of the humble fish at the heart of their building, a metaphor for a flock of our fishy finned friends. Fantastic!