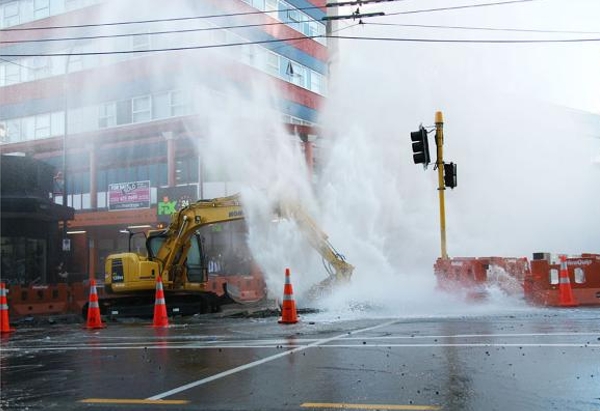 It is lovely to hear and to see that the current WCC roads department has undertaken to supply Wellington with a new Fountain. Trialled briefly last night, its magnificent spout put a sparkle in the Fish’s eye, a flick in my tail. I love a good soaking.

Digging the preparatory hole in Manners Mall on Tuesday afternoon, it seems that a digger unearthed the gusher in the line of the proposed Manners Mall bus-route. By all accounts it was equal in size and impressiveness to the more established Oriental Bay fountain, which entertains me daily in the waters of the harbour. There are more photos and even a video, on the Dom Post website here.
Anti-mall protestors Maria van der Meel (the woman who was masterminding the Facebook anti-buslane campaign), and that bloke who tried to bash a hole in the concrete with a sledge hammer (injuring only his ego), will presumably be happy that the Council have taken on board some of the criticism, and are evidently installing features other than just a lane for buses. It is not known how the fountain will interact with the buslanes in the long term.
Perhaps periodically. Perhaps, on the hour, as per the Len Lye Water Whirler. Perhaps, as per Oriental Bay, only nightly between the hours of 7.30 and 9pm.

Regardless, it is a better piece of PR than the news today that 3 old Wellington buildings on Willis St are due to come down – and one is already underway in demolition.

“The street-front buildings, one of which includes a facade emblazoned with “1876”, are owned by Singaporean Grand Complex Properties, which plans eventually to build a multimillion-dollar high-rise on the site. A temporary two-storey building will replace the one under demolition at 34-42 Willis St.
Historic Places Trust central region general manager Ann Neill said the trust was disappointed the buildings were being demolished and that it was not alerted by the council.”

Seems to me that the Council has really screwed up on that issue. WCC spokesperson, Richard MacLean, is reported as saying that “There was no reason for the consent to have been publicly notified. The council regretted any oversight in not alerting the trust” but the issue is bigger than just a PR blunder. The buildings themselves are old, but not fantastically impressive really. They’ve been semi-derelict for years, with paint peeling off, and yes, being old, and probably brick, they probably are an earthquake risk as they are. I’m saddened, but not devastated at that news. What is good is that the McCarthy building, next door on the Wellington Central site (the Telecom building), is a far more interesting building and is being kept in place with even almost a whole bay of structure retained – including the celebrated central stair. What is bad is that a piece of history is being demolished without the chance of public discussion – and that raises serious alarm bells regarding the new Heritage team that currently exists at the Council.