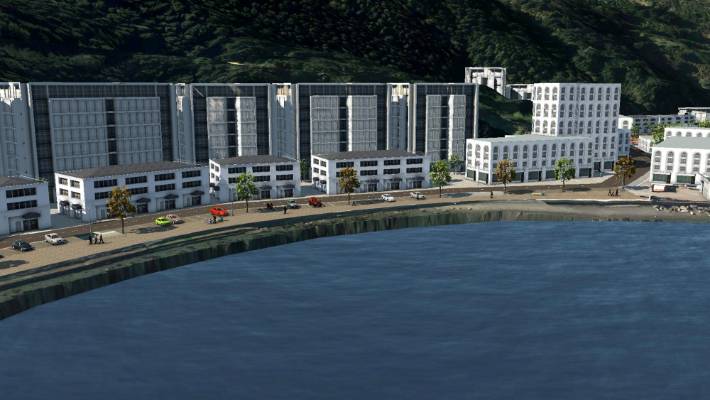 There is a lot of mud being slung over in Shelly Bay at the moment, some of which is landing on the shoulders of innocent passers by, but most of which is falling back down and hitting the people throwing it. Peter Jackson, one of the wealthiest men in New Zealand, and certainly the most powerful man in Wellington, is calling the Mayor Justin Lester all sorts of names. I’ve only met Lester a few times so I can’t say whether he is all that Jackson says he is, but I generally agree that the Council have made a hash of it over on our eastern bay (i.e. the west coast of Jacksonville). More on that another day though – but right now, there is one thing that I really want to tackle Sir Peter J on – his comment that Shelly Bay looks like it is sprouting a whole lot of soviet-style apartment blocks. This, below, is what the Miramar Business group has said that the Shelly Bay scheme could end up looking like:

That’s straying into Architectural territory, of which I am the King and not Jackson. I build my creations from steel, concrete and wood, designed after the ancient principles of Vitruvius Pollo, whereas Jackson builds his from Polystyrene and expanding foam gunk, designed after the ancient design principles of the current Art Department at Weta. Mine have to stay up for a minimum of 50 years, whereas Jackson’s sets are only up for a few days or weeks, but live on forever on the celluloid screen. Sir Peter wins hands down every time, but is rumoured to intensely dislike architects, and so it is no wonder that he resorted to the old cliche of “soviet-style apartment blocks” as a cheap insult.

But hold it right there Sir PJ. Have you actually been to Russia or the former Soviet satellite states? Have you got a plan for the Stans, man? No – neither have I. But what I do have, is a greater architectural knowledge than PJ, and have stayed in an apartment block in a few different former eastern-block countries. The last one I stayed at was in Bratislava, at the start of autumn, as the leaves were falling in the Balkans. It was, from the outside, gray and uninteresting, but from the inside it was warm, dry, quiet. The one thing that the Soviets really were good at was building apartment blocks – we could learn a lot from them. They were (maybe still are?) the masters of concrete prefabrication.

I can’t remember where I was reading this recently, but the production-line of precast concrete panels, once set up, continued to get better and better, so these soviet-era apartments were soon rolling off the production lines in Kazakhstan, Azerbaijan, Uzbekistan, Chechnya, Ukraine, Hungary, Yugoslavia, Czechoslovakia, and many other places with an excess of the letters Z and K. They were – they are, actually, really good.

Will Ian Cassell’s apartments designed by Architecture Plus for the Shelly Bay project be as good? As strong? As warm? As long lasting? What do we know? How do we know? Who has told us?

On an allied note, I went to the new Paddington on Taranaki apartments the other day, and apparently they are selling well. I’m still not sure if they have any Resource Consent in place, but the “buyer pack” mentions nothing about means of construction. Are the party walls constructed from timber walls or are they concrete? The buyer pack mentions that the buildings will be built to the high standards of the New Zealand Building Code, which sits about the bottom of an table of usefulness. That’s like saying “We’ll build them as crap as we can, before getting sent to jail for it”. I hope that they A+ have better plans than that!

Anyhow – if you’re into knowing a bit more about Soviet era apartments across the Stans, then check out this Guardian website, which has a few excellent photos of bizarre Soviet-style apartment buildings in the former USSR. I’ve copied some of the photos in here for your delectation (and for Sir Peter J’s re-education). And underneath here, a picture of what is being actually proposed. Similar? Or not?