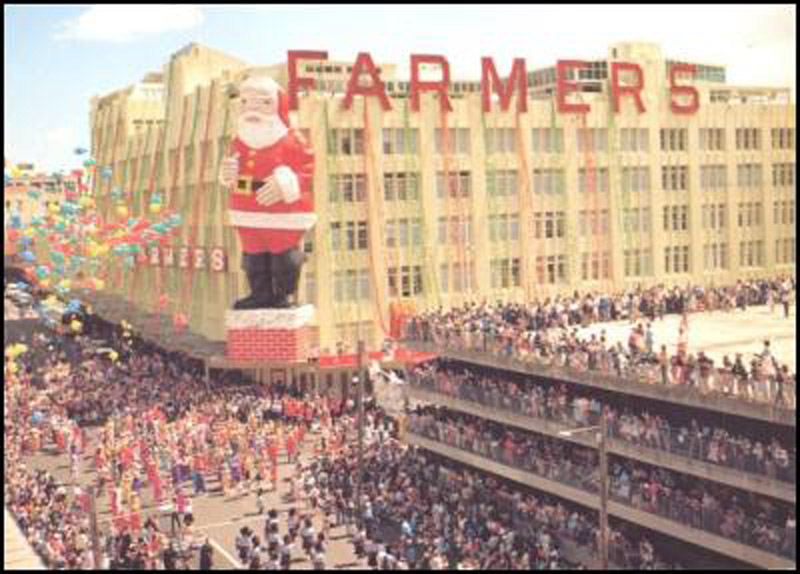 A rare post this morning on an old friend of mine – the giant Santa statue in Auckland. Sadly, after a million years of him being tied to a central Auckland building (see: urban related discussion) the cold-hearted people of Auckland have decided that they no longer want a Santa in their midst.

Standing about a full 5 stories high, Santa was a defining part of my childhood. I can no longer remember the faces or the names of any of my childhood friends, but I do still remember the excitement of going as a child into central Auckland, and seeing the Santa statue. The whole family would cram into the aged Ford Consul, no seatbelts on the long front bench seats, and with Dad smoking furiously, filling the car with tobacco smoke, we would motor up to the tall towers of central Auckland once a year, in my mind specifically to go and see the Santa statue. There he was, astride a street corner, cloak glowing red, long before i had heard of Coca Cola’s corporate branding of my big-bodied hero. His finger curled and slowly animated, he beckoned us into his grotto, which presumably was somewhere in the Farmers building (nowadays a Heritage Hotel). I could stand on the street corner, presumably in short trousers, like a Fish out of water, and watch him curl that finger seductively. Apparently he also winked, but I do not recall that.

Yes yes, in retrospect it does indeed all sound extremely creepy, and the sort of thing any self-loathing paedophile would be proud to do: wink, leer, wiggle your finger seductively and promise small children some candy if they would sit on your lap… But that is looking at this through the eye of an adult. As a child, it was magical. I stopped believing in God long before I stopped believing in Santa.

Most importantly though, it gave me an urban experience, rather than a suburban outlook on life. Going into Auckland, we would drive down Grafton Gully, at that stage still full of mighty tall trees, instead of just 14 lanes of asphalt. We would pass the university, a lovely stone filigree of a tower, set in a delicate park like setting on one side, with the two-storied villas of Symonds St on the other side. There was no Skytower, no Metropolis, no PWC tower. There was just Neville Price’s superb slim tower for Singapore Airlines, the magnificence of the Dilworth building and it’s multiple modulation of the corner, still the best building in Auckland’s main Street. We would excitedly shout out “Pinhead” to the badly made statue of the tall Maori chief with the disproportionately small head who stood proudly aloof in the centre of the street (where is he now?), and we would get giddy from going round and round in the parking building, sliding from one side of the vinyl bench seat to another, unfettered, and with great glee, as Dad searched for a car park. Parking buildings! The height of big city sophistication! Well worth making the trip up country for.