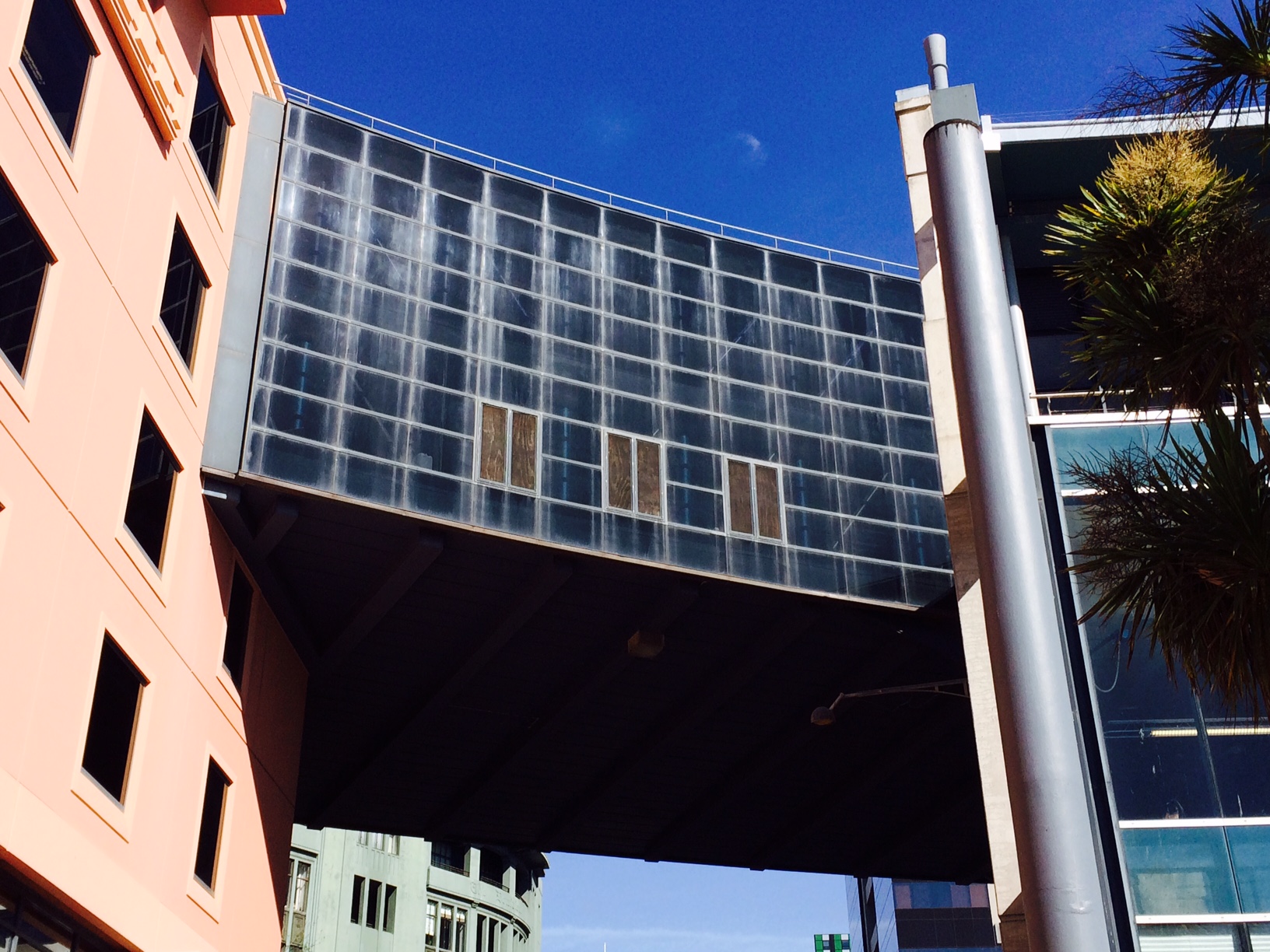 The demolition of the Portico in Civic Square is about to start soon, apparently. Is anyone going to miss it? Soon after it was first proposed to be demolished a year or so ago, a friend of mine (a prominent architect in town) received a phone call from someone who felt it was an outrage that it’s demolition be thought possible – but he wisely declined to be outraged. There certainly hasn’t been a great outpouring of concern from the public. Portico? Meh!

Dating from Athfield Architects more vigorously civic days of the new City Library, the portico is one of the few items of architecture in Wellington to have such an overtly civic urban design aim: enclosing Civic Square. The history of the site is simple, and most of you will know it better than me (we also discussed it heavily back in January 2013 – worth reading for the comments afterwards!): the area we now know as Civic Square was once an ordinary street, with a lot of car parking for City Council workers. As part of the creation of a Civic precinct in the late 80s / early 90s, the road was closed, City to Sea bridge built, the old Library converted into the City Gallery, a new magnificent Library building built, and the Council’s civic chambers extended to wrap around the whole. A portico over the gateway entrance to the newly pedestrian used square proudly proclaimed to all who could read the urban signs, that “this be land of the people” and cars were forevermore buried underground.

As far as Post-modern statements go, this one’s a doozie. Take the Library first – no, go on, I insist. Although Post-Modernism as an architectural style is now thoroughly reviled, and no self-respecting architect would be seen dead proposing a Po-mo building now, the Library building is a triumph of its time. We have a pseudo-classical facade to the Victoria St frontage, with low fat straight pipe columns in groups of four, holding up a concrete facade above. The columns are uncomfortably low, almost ineptly so, and for reasons unknown, and yet this creates a colonnade of space in a city without colonnades, and a space where the wind and the rain cannot actually drench you, unusual on the east side of a street that channels the winds. They are low enough to almost crack your head as you walk between them, and from the front the building looks deformed, almost hammered into the ground, and yet, somehow it works.

The Library then continues its theme of colonnades as it continues from the entrance, wrapping around its north side – this time in the form of a row of giant copper-clad Nikau palm columns, once again loudly portraying our south pacific heritage in preference to the more ancient Grecian orders. No Doric orders here – nor Ionic or Corinthian, but instead the Nikau-ian order proudly marches its way uphill, leading us on a road to – where? – ultimately nowhere really, but it does it so well that 30 years down the trail, I think it still brings a smile to most people’s lips. That has to be applauded – take a bow Mr Athfield – as there are few Po-Mo buildings still raising smiles and looking good in the world today.

The Library then continues on its journey of an architectural smorgasbord, as it selects a wibbly-wobbly wavey motif for its east facade, completely different from the other two facades, and recalling that behind all the tomfoolery on the front, the Library is actually a strictly modernist building at its structural heart. This is probably my favourite facade, with the slickness of the full height glazing curving in and out, and overlooking a series of pools and waterfalls that the council sometimes bother to fill with water, when they are not causing leaks into the carpark below.

There is a fourth facade of course, and that is where the Portico lives. But not for long. Within a month, it will be under demolition, and not before time I feel. It has always been the fly in the ointment to me – instead of being built in the same happy smiley Po-Mo style as the buildings on either side – it is built out of black pained steel and black smoked glass, a sort of Darth Vaders bread-basket spanning the gap. It’s purpose was three-fold: firstly to provide some extra space for all those Council workers overflowing from the Civic building (constructed at the same time, and also featuring a tall colonnade, but not by Athfield – it was Stephenson and Turner); secondly to allow the Council to connect with the Library physically without getting wet (although apparently that link was never really ever used); and lastly to provide a civic gesture of enclosing the square. It never really worked at this last point to me: two stories of malevolent black building suspended several stories abover ground had bugger-all effect of providing wind and rain protection at ground level, and all it did was block out the views from the Dominion building and the Evening Post building, both fine works of architecture that deserve to retain their civic views.

I suppose that as a structural solution it deserved some applause, as it spanned the width of the gap between the buildings effortlessly, presumably with some giant steel trusses secreted away inside. Unfortunately, as we have now discovered, it’s rigidity also made the buildings at either end all rather vulnerable to structural collapse – in the case of a decent sized earthquake, this portico would act like a giant battering ram, and pulverize the other buildings into dust, or something like that, involving calculations of structural resonance and adequacy of seismic movement joints. I dunno the exact reasons why – you’ll have to ask an engineer – but it means it has gone from being a useful thing to a very bad thing, and it must be destroyed.

But I never liked it anyway. It was oppressively black (and no, Sue, I’m not being racist), and badly detailed. It was an ugly slab of architectural death, and that’s the truth. On the east facade, overlooking the Civic Square, there were / are (still are, until it gets demolished) some windows (from memory, three) that were actually doorways opening out into the void. I don’t know what this was like from the inside, but from the outside it looked like they might be just ordinary doors, probably with a sign on the inside saying “Do Not Use”. Perhaps these were the doors to be used in the case of an emergency evacuation by low-flying space-craft? Or doors to be used by unsuccessful candidates for election to Council? Or even a doorway for the deletion of extraneous urban design team members, and heritage experts, as that team seems to be continually reworked, in an endless torture like having an eagle feast on your liver each night. You know, that Greek legend with the chappie chained to a rock. Prometheus. Unpleasant.

Where was I ? Chained to a rock, or being thrown out the door several stories high above the entrance to Civic Square? I forget. Umm, oh yes – details. Yes: the portico must have been designed to be held firmly at one end, and then to seismically piston in and out at the other end, like a giant black square pistoning thing, but instead we now know that it would destroy the buildings at both ends, and then plummet to the ground, killing all the Japanese tourists gathered in the City Information centre below, and then crashing through the thin floor slab to implode and pancake in the basement carpark below. You’ve got to face it: that would be one helluva crash. But not a good thing. So: let’s farewell it with a song:
“Goodbye Portico, although I never really knew you at all, you had the grace to hold yourself, while those around you fall…”