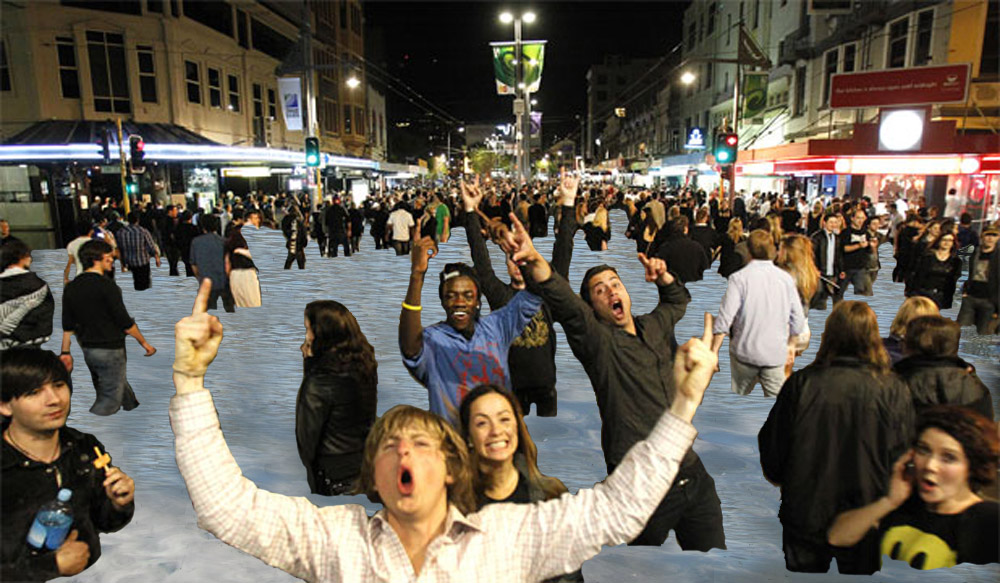 Front page article on the DomPost the other day was an article about a boy needing a haircut at school. Truly world-shattering news. Almost as important as the case a few weeks back, of the cat that slept in two different beds. Wow. Nothing is more important in the world than knowing if kitty prefers a duvet or a blankie. Wars in Iraq, Syria, Ebola in Africa and now the USA, any number of important things around the world and you devote an entire page to a cat. Dominion Post: you are beyond pathetic, and don’t deserve to be called a newspaper.

In a small column next to the lead story on Friday, there was a much smaller, much less heralded article, about Wellington’s future with rising sea-levels. Enticingly headed up (on the print edition) as something about Venice, the article is probably the most important and certainly the most interesting thing about Wellington for the next 100 years. It’s a slow-acting disaster (much like the DomPost itself), due to be played out over decades, so of course we don’t need to absolutely start today, but we do positively need to start thinking about this tomorrow. Sea levels are predicted to rise – and apparently they are rising already, although only by millimeters so far. And of course, despite the DomPost saying that Wellywood will become Waterworld, we’re never going to be as bad a flop as a Kevin Costner movie. After all, we’ve got Peter Jackson, and he’ll save us. Weta always comes to the rescue. Although, as everything that Weta build is just made from polystyrene, perhaps Miramar will just break off and float away…

Despite the Tonkin and Taylor written report being commissioned by WCC (and therefore it applies only to Wellington), the findings of course apply to a large number of other places as well. Yes yes, London, Amsterdam, Venice of course, but let’s start closer to home: Petone, Porirua, Eastbourne for starters. Petone especially is vulnerable, despite being a trendy place to live, for it’s nice gently sloping beachfront is wide open for storm surge to come barreling in and take out half the town. Eastbourne is already under water every time there’s a raging norwester, so they already know what they’re in for: a lot of new raised roadworks I’d say. All those trendy architects who get the ferry to work: you’re headed in the right direction, although the boat may be able to get you closer to your home in future.

I haven’t read all the words yet, only looked at the pictures, some of which are reproduced here. Here’s a link to the report – you should read it yourself. But from what I can gather, two main scenarios were modeled : a 1.5m rise, and a 3.0m rise. Either one of those is going to be catastrophic to our cities – Auckland would actually be far more at risk than Wellington, in my estimation, as it has so much more waterfront around its two massive harbours – but Wellington will need to think hard about how to change its ways. So how would that affect us?

As anyone who has worked with plans for central Wellington properties will know, there is not a great deal of height between high tide and Lambton Quay. Indeed, streams undergrounded into culverts like the Kumutoto Stream and the Waimapihi Stream already backfill with seawater at high tide. In storm situations, it may surprise people that seawater is likely to come bursting up through manholes on Lambton Quay long before it comes hurtling over the barricades at Queens Wharf. Lambton Quay, our original beach front street, is actually lower than Jervois Quay. So, if the water at high spring tides is ever going to be lapping over Jervois, then Lambton will already be waterlogged. Fun for all the shoppers – its the Aqua Alta all over again.

In Venice, they’re ready with gumboots next to the gondola, and they have boardwalks standing by to parade across St Marks Square. Quite what it would look like when we find our central business district under a meter of water, I’m not quite sure, but I’m fairly certain that a cat won’t be featuring on the front page that day.

Te Aro, despite being not much more than a swamp a 150 years ago, does at least slope up from the sea, and so it is only the most recent, expensive housing down by the sea that will be marooned. Further up the “hill” of Taranaki St, places like Vivian Street will be fine – perhaps even the new beachfront. Courtenay Place, of course, will lap up the moisture around its ankles, and keep on partying, like Bourbon Street did in Hurricane Katrina. Seeing as the girls down there on a Friday night already wear tiny short skirts, bare legs will be fine in 3 foot of extra water. I predict that new types of high heels will emerge, to stalk across the mudflats outside Molly Malones.

Actually, that is one of the parts of this Tonkin and Taylor report that I find hilarious – never get a Geotechnical Engineer to try and write about anything sensitive. Towards the end of the report, they carefully go through Wellington, suburb by suburb, and note whether anything will be affected.

They have four headings: one of them is “Cultural”. Residents of Kilbirnie may be interested to know that in the highly likely event of their inundation, there is nothing in Kilbirnie that is considered to be “cultural” at risk. Unlike in Te Aro, where the greatest work of “culture” at risk is the dried out remains of a ponga whare in the basement of that aesthetically strained apartment dwelling on Taranaki St. Apparently Te Papa doesn’t count.

Culture is evidently defined by Tonkin and Taylor as only being historic, institution remains of early Maori settlements, and other cultures, such as Anglo-European don’t count. The large Indian temple in Kilbirnie? Sorry, not culture. Which is just as well, as it will be well underwater in 100 years.

But petty snarkiness aside, the report raises some fantastically interesting issues. How do we manage the inevitable sea-level rise? Managed retreat is one option – also known as “just giving up when it all gets too hard”, whereas valiantly fighting against the forces of nature by building bigger sea walls is another. The WCC tried to talk to the locals about those approaches recently in Island Bay, where they offered the locals a number of choices, including rebuilding the existing wall exactly as is, or retreating back a block and stopping off the road completely – abandoning it to the sand dunes that already regularly sweep across the tiny park there. Not surprisingly, as Island Bay locals are not that keen on being progressive thinkers, they went for the status quo – rebuild as is. Not boding well for Wellingtonians thinking ahead to the next century….

One option for Wellington is to wall off the whole harbour, and reclaim a lot more. I’m not sure that T&T really want that option to proceed – but hey, at least it may solve some of the transport problems of the city as well. And no, i did not make that picture up. Nor this one either – how about a sea wall along Jervois Quay?

Or even one along the northern edge of Kilbirnie – literally a causeway to Miramar? It may sound bad, and unlikely, but why not look on the bright side to some of the wonderful precedents for inspiration?

Like Mont St Michel for starters. I could just imagine Sir Peter enjoying a location like this one…