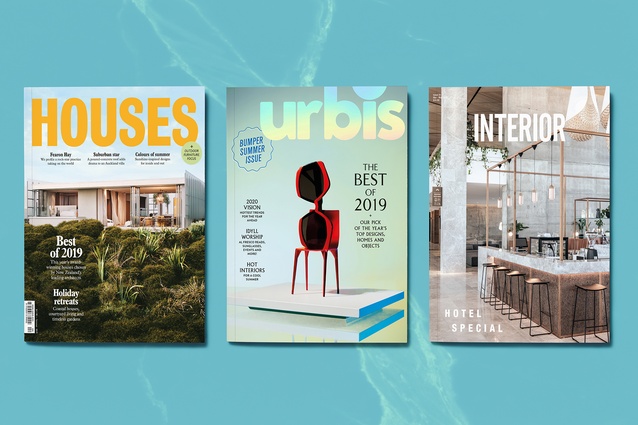 RIP Home and Houses and Urbis

I love magazines – those that know me will know that I have quite a few at Fish World Headquarters – so it feels only right that I try to pen an obituary (OK, to keyboard it, stop being so picky), to the fact that our meagre Architectural Press in this country has just died. Well, almost everything.

Where do we even start? The media has been full of wailing that the Listener has died (or been prematurely assassinated by ze Germans), and a few of them also mention that the NZ Women’s Weekly (or, the Woman’s Weakly, as it has always seemed to me) has also departed to the giant dentist’s waiting room upstairs.

The Listener I’m sad about (although Starkive is not) as I enjoyed the Wordsworth column each week (just who is Rex McGregor who wins every second week?), the articles I read from cover to cover, and occasionally I would find the right week to look at what was actually on TV. Mostly though, the Listener would fall down the back of the sofa and be absent on the night you actually want it. The WW I couldn’t really care less about – good riddance to absolute rubbish – Bish bosh to the fish tosh about the shenanigans of the not-so-Royal Family or who cares what latest inane gossip about our C-grade so-called celebrities – ugh. But what was not mentioned by almost anyone was that the demise of Bauer also meant the end of Home.

Home was never at the poncey end of the rag trade like Home and Entertaining, or Home and Gardening, but it was descended from one of NZ’s most long-lived architectural publications: Home and Building, on the shelves of kiwi bookshops for about 75 years or more. At some stage in the recent 20 years of history, Home dropped the Building part and just became Home. And let’s face it, Home is where the heart is. Home is where you want to be and I guess you’re already there. Less aimed at Builders therefore than comfortable middle-class home-owners (I’ve nothing against them – I’m one myself), Home was, under the direction of the brilliant and sensitive Jeremy Hansen, a quite beautiful magazine, with well-photographed and well-laid-out houses in a well laid magazine. In our office, the Home magazine was always well-read and became dog-eared, a sign of frequent use as a source book of who and what is red hot in NZ, even under the more recent leadership of Simon Farrell-Green. The very last issue of Home this week was, coincidentally, also their 25-year celebration of the Home of the Year, featuring just about every Home from the last 25 years – the perfect issue to go out on. You couldn’t have planned it better than if you knew the Corona was coming.

Sadly I never got featured in Home as their star architect of the month, although all my friends and colleagues seemed to be regularly exposed there along with their gleaming black-clad creations. Or did I? Was it just the needs of a publicity-shy Eye of the Fish editorial policy that meant that my talents remain hidden for ever beneath the waves? Or was the Eye featured as starchitect semi-regularly on their crisp white pages and its just me being modest, pretending that I wasn’t? We’ll never know – well, I will, but you’ll never know.

RIP Home – I hope and trust that you will come back soon. But I doubt it – it is literally the end of an era, for eva.

Slightly less part of the NZ scenery but no less good was the almost equal magazine: Houses. Not a sister title but a distant cousin. Similarly titled, with just two letters more in the title but a much more strict editorial policy, Houses was equally glossy but less personally oriented and has only gone to the great recycling pit in the sky this week, with another overseas media company dumping several titles. Houses did not have quite the same personal touch of Jeremy Hansen. This never affected the spread of the magazine though: Houses sold a similar amount of copies: a fine magazine, full of fine houses. RIP Houses. Alas, Horatio, I knew you.

Magazines centred on Interiors and Landscape and other more minor interests have been struggling for years, with relaunch after relaunch, all to no avail: no real surprise there that they have bit the dust yet again. But the surprise demise today at sunrise was that Urbis is now amiss – and no, I’m not taking the piss. Urbis was (arguably still is) the premiere design magazine in Aotearoa, being always slightly larger than every other magazine, certainly more glossy and absolutely more flamboyant, although selling far fewer. The RipitUp of Architecture – the Metro of the metrosexual. A straight magazine for gay men, perhaps, or a gay magazine for serious architects, Urbis started out as an AGM offshoot about 20 years ago – almost to the day – and ventured from Urban Design and Architecture to take a sideways curving journey to become a fashion mag for a few years, and more recently returning to the fold as an architectural focused semi-monthly edition. I was cleaning out my vast magazine collection last month (pre-lock-down – if I had just waited I could have taken all the time I needed) and found to my horror that virtually all my Urbis were being Urbinned, fed to the dogs, or recycled in the great circular bin. It had become a magazine like Scope or Habitat to me – you know what I mean – products that arrived and just got binned. Farewell Urbis – we parted company many years ago, but I loved you still, despite your move towards fashion and away from form and function.

North and South has gone, well, South. Metro has launched its last lunch. Next has now become, not next, but just last, and now lost. Bauer has been bitten and BCI has broken and Stuff Me has head-butted a final brick wall.

Thankfully, hugely so for me, is that Architecture NZ is still alive, even if only just, as it really is the organ for the members, if that is still a phrase allowed in polite company. I’ve lived with Arch NZ for years now, from back in the day when Gerald Melling and Gordon Moller nearly sank it (or rescued it) and it has changed its name a couple of times and its editors only a few times more – John Walsh commandeered it for years, Justine Walsh more recently, and Chris Barton right now, – but I am glad to hear that Nathan Inkpen (the perfect name for a publisher, and I’m not making that up) is keeping the title afloat for now. Presumably it may be able to expand into the gaps left over by the demise of Houses and Home – even if it can’t find enough advertising in the upcoming grim economic climate. I do find it grimly amusing that it’s latest edition (purple, below) shows the superb Nelson Airport terminal, a place where no planes are now flying and to which few will ever fly to in the future.

You know what? Screw the economic climate. Screw the stupidity of basing an economy on a reliance on advertising. Seriously people, who in the world wants the advertising? At least with a magazine you can just turn the page or quietly ignore the offending adverts, whereas with the TV channels you can do nothing more than leap for the remote to turn the inane sound off. Horribly, the print sector and the media in general are all bleeding funds to the Google and FaceBook, where you don’t even have to click on an advert for Larry Page and Sergei Brin and Mark Zuckerberg to make millions. The mere fact that your eyeballs may have glanced at a pixel allows them to charge the advertiser, and despite my installing AdBlocker on my every device, somehow the idiots of the internet mean that “business models” of traditional magazine advertising is now defunct. And not just magazines – TV, Radio, Newspapers, Magazines, everything is now totally stupid. The lowest common denominator is, of course, the idiocy of Jono and Ben on Three, as bad and stupid as the Tiger King or the rabid ranting of Mike Hosking for NZ Herald, exhorting dollars for the circulation.

The alternative of course is that we embrace a brave new world of Zero Advertising. I mean, seriously, who wants it? This is the one chance we have to grab this fresh new world and start again. The BBC does not have adverts and neither does RNZ. Why on earth should TVNZ have adverts? Why should Stuff and NZME force banal Click-Bait shit stories down our throats, steadily blurring the boundaries between rubbish and reliable. I mean, BuzzFeed is now a reputable news outlet, publishing journalism, as is the former semi-porno Vice, while the Dominion Post has transformed into an endless purveyor of tosh about cat pictures and “You won’t believe this…” headlines. Begone, damn Spot of Advertising.

There is one medium still left alive that does not, as yet, have advertising. It has paper pages, and writing printed on them. It has covers, and sometimes pictures, but no adverts. It is a BOOK and to me, it is the past, it is still in the present, and it is most definitely still the future.