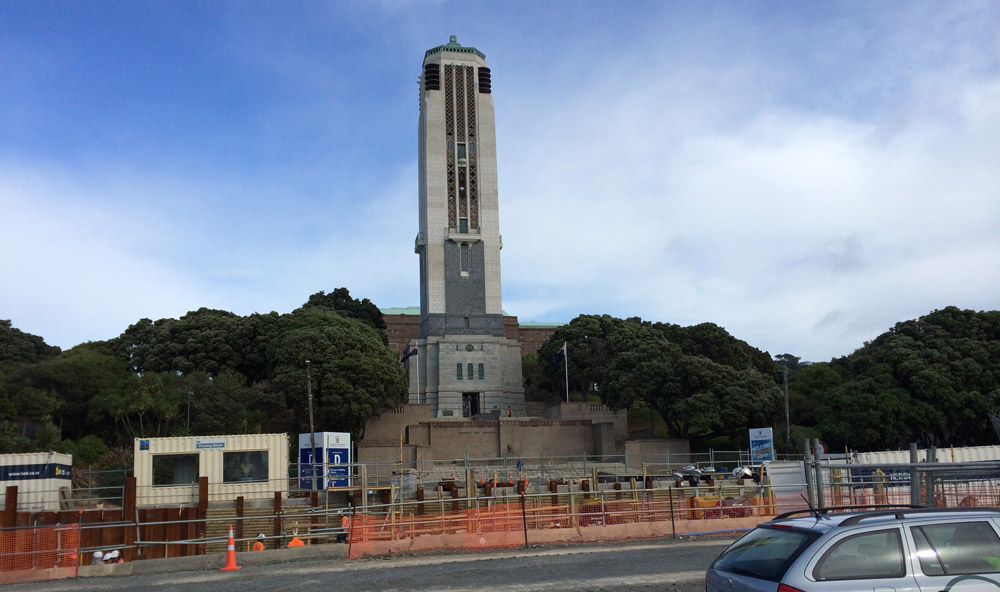 One year to go

There is one year to go before ANZAC Day 2015, and therefore only one year for the War Memorial Park to be up and running. That means, of course, that the War Memorial Underpass needs to be in place well before then, which is a pretty steep ask, but at this stage it looks as though it will be finished in plenty of time. The almost exclusively Maori / Polynesian workforce of reinforcing guys have been doing the heavy lifting – the grunt work of building the large steel reinforcement cages that give the concrete box its strength. NZTA’s construction crew have been working at a steady pace, concreting side walls, the first few bays of concrete rooftop are in place – they are about a third of the way through laying the concrete deck over the top, and the move of the Creche of Compassion seems to be imminent.

It’s not just the Creche on the to-do list either – they’ve also got to build the contraflow parking for the local Mount Cook School, and then of course start prepping for the War Memorial flyover as well. With a bit of luck, the Basin Bridge Board of Inquiry may just about be complete by then… Incidentally, is that temporary road going to end up being New Zealand’s most expensive road (per m2), given that it was only there for just two years? Normally a road will “pay itself off” over a number of decades, but given that a full highway spec road was constructed for this tiny length of time…. No, it just isn’t worth even thinking about. Literally, money down the drain. All in a good cause, of course. All in the best possible taste.

Once that big underground concrete box is in place, which looks like it will be about the same time as completion of the concrete side walls in the “trench” part either side of the “tunnel” part, then we are going to see some action on the creation of the park itself. It is a tight time frame. If all goes according to plan, and the traffic starts flowing through the underpass by August, then all that remains to be done is to:
Rip up the temporary road where the cars currently are,
Extract the sheet piles and column piles that hold the current earth banks at bay,
Back fill the gap between to ensure the old Police Station doesn’t fall into the hole,
Waterproof the heck out of the lid to the box,
Lay a new layer of fill all over the top,
Set out the concrete walls and walkways that define the new park edges,
Build a new pavilion or two in the park,
Plant the green elements, such as numerous pohutukawa and golden elm and eucalypts,
Install the Australian ANZAC memorial opposite the Tomb of the Unknown Warrior,

Lay some new roads for Massey to get to their front door,
Pave the area in front for the soldiers to march up and down,
Sow some grass or buy lots of ReadyLawn,
And then open in 12 months time with a massive 100 year commemoration of our national war dead.

There, nothing to it! Just remember, it CANNOT be late. No pressure….

No pressure at all… But just as a reminder, here is a pic from 1966, with Lyndon B Johnson speaking outside the War Memorial – it is likely to be a big occasion this time as well. Presidents? Royals? Australian Governor-Generals? Even (uggh) Tony Abbot, the mad monk? As far as loathsome bits of scum, he’s pretty bad, but I suppose they will have to invite him, seeing as he is in charge of the West Island… Security will need to be tight next year!

We can already see the design of WAAL coming through, in the concrete pour for the edge of the western portal. Unlike the Mt Victoria tunnel portal (featured so prominently in this recent post), there is no symmetry involved in this design. It is always the most nerve wracking time of a project to me – the heart in mouth feeling as the shuttering comes off, and the concrete is exposed. Did I get the drawings right? Have the contractors built it according to plan? Will the rest of the bits coming in a year’s time fit correctly onto the bits we’ve built today?

No such worries all those years ago when the Carillon was inaugurated, and the Museum sat unencumbered up on the hill, sans metrosideros excelsa, and sans just about all the automobilius sillius too. No CAD drawings then – just a trusty ink tip scratching away on Gummer’s vellum sheet, and probably only a half dozen drawings in total. The scene then was a tabula rasa, in the minds of the designers anyway, and the hill in these pictures is razed clean, not a tree in sight, no specks of maori occupation on site… cultural sensitivity be damned – they wanted a big tower, and they got it. Proud, erect, firm, and very upstanding. Thank heavens it survived the recent Cook Strait earthquakes – imagine the kurfuffel if it had fallen down. And the racket as the bells crashed to the ground…

The Carillon tower has recently finished its renovation it seems, as the scaffolding that has been in residence for the last year or two, has at last disappeared. Whoever was doing that project must have been wondering if they would make last Friday’s deadline as well… But they did, and so all is well. Time is ticking. Time for the Last Post…