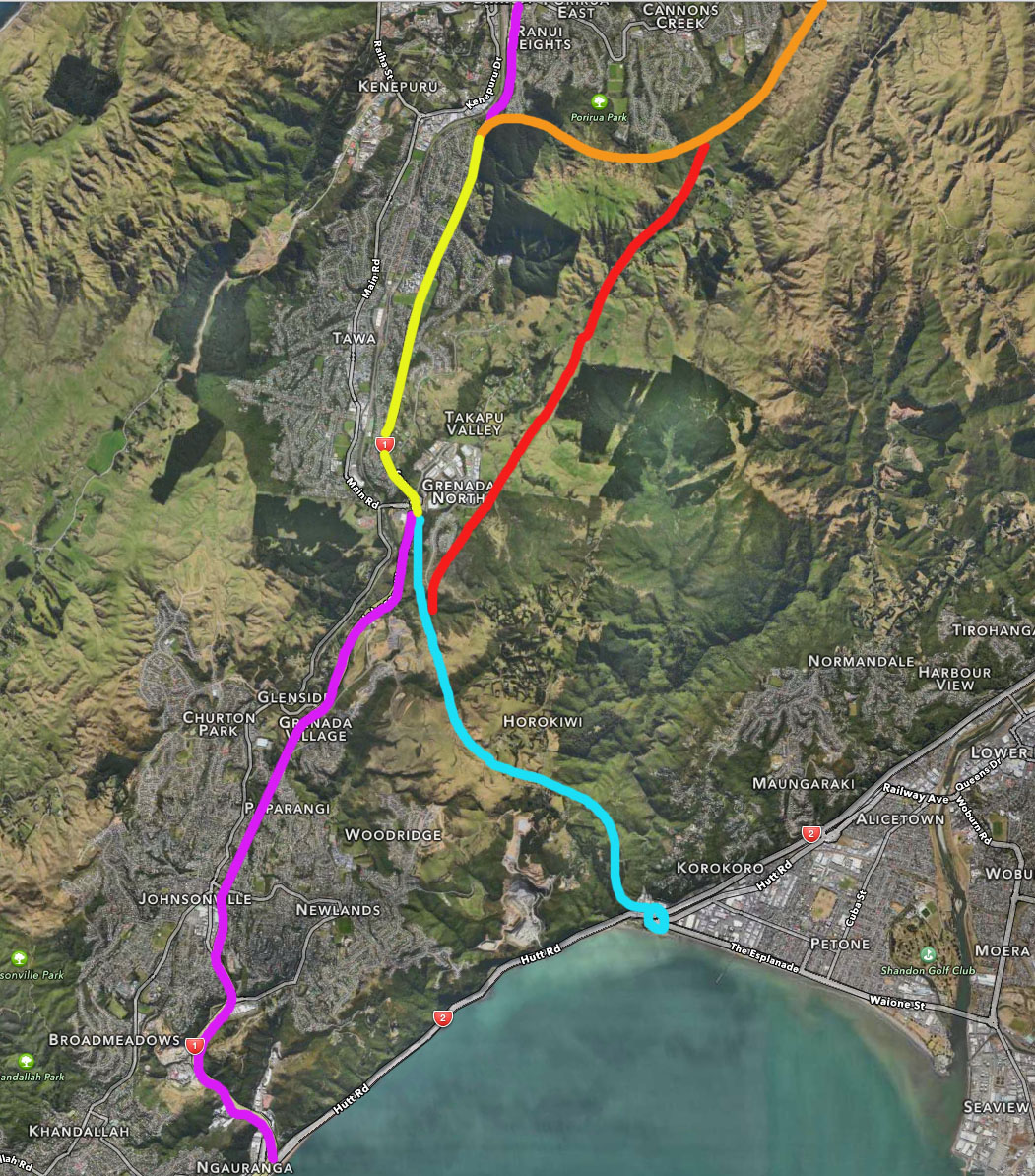 Since Scoop posted a top-secret document online, via Peter Dunn, I’ve been trying to make sense of what NZTA and the Mayors of our cities, are up to. In the end, i figured that the only way I could make sense of the discussion was to make my own maps. The lack of coordinated and articulate maps from NZTA is either deliberate, or by accident. If it is an accident, then it’s down to gross incompetence, and if it’s deliberate, then it’s simply a political desire to keep you/us in the dark. You can make your own mind up. If they won’t do it, and show us some maps, then I will.

So, here are some maps. Let’s start off with an easy one: where is Transmission Gully?

The road in orange is the approximate route of where it goes. (Correct me if I’m wrong). The orange route was carefully selected, after much, much discussion, in which it was agreed not to go down Takapu Valley, hence the hook as it comes off at Kenepuru.

Chances are that if you are travelling north, you will mostly choose to go via SH58 (green). Very few people from the Hutt will go south and over the blue route of P2G, unless they are working in Tawa or Porirua. At present (and if this link road was not to be built) they travel down to Ngauranga and take route SH1.

Let’s zoom in a bit more on that bit of link road.

There’s a monster aerial roundabout at Petone, an arduous climb up the hill through Horokiwi, and then along the relatively flat-top hills to get to Grenada. Then it gets tricky.

This one here shows what it was going to do: beef up the road through Tawa (in yellow).

But then this announcement from the NZTA memo TP/03/29/02, means that they now really do want to go back on 20 years of negotiations, and bugger up Takapu Valley. The red line shows the route along the top of the properties in Takapu – not down the bottom of the valley, but cutting along the hill tops.

Well, it’s a blunt choice if you are the NZTA. Bugger up the lives of several families in Tawa if you beef up the Tawa route, or do the same thing to the lesser number of families in Takapu Valley. That’s just doing what a Transport Planner does – the key thing is the decision makers. While NZTA had promised to consult further with the community (after last year’s “consultation” in Tawa almost turned to fist-fights, apparently), instead they have done a secret deal with Mayors and CEOs of the Wellington region councils. Behind closed doors. That means Celia Wade-Brown, Ray Wallace, Nick Leggat, and Fran Wilde really, if I’m reading the tea-leaves correctly? It’s either a brave move by these leaders, or a very shifty one, as previously the Takapu route had been agreed to keep off the table.

So lets look at what the alternative route, through Tawa, would mean. Here’s a group of 3 images that make up the route – before (ie existing / current).

And now for the (now) proposed route through Tawa, ie with route widening and demolished houses. Basically, the route will double in width, from the current two lanes each way, to at least 3 lanes plus a shoulder each way. It’s hard to know exactly where the route is planned for, as no real drawings have been released, but it’s fairly easy to understand the NZTA logic – go down the side causing the least destruction to start with (ie through Tawa College sports field, rather than the houses on the other side of the road). It would end up like this:

Exactly what happens at the Tawa / Grenada interchange, I can’t figure out, but its safe enough to say that there will be some kind of giant aerial or subterannean interchange, whether they end up going through Tawa, or flying off up Takapu Valley. The choice is yours – actually, its not yours, it is our Mayors, on our behalf, who will make this call next week. Destroy Takapu, or Destroy Tawa?

End of the Golden Weather?