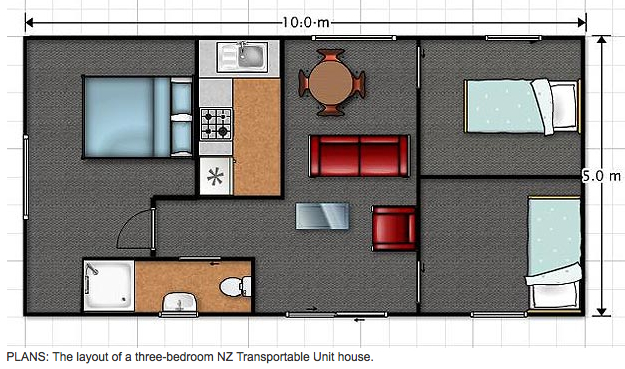 No Royal Wedding in this house

While I’m steadily more and more amazed at the sycophantic press coverage afforded to the nuptials of a certain couple this week, not just from the gutter press of No Idea and Women’s Weakly etc, but also from TV1 and TV3, I swore a solemn oath on the fin of my father’s flipper that I wouldn’t cover the wedding, and hence won’t say another word about them.

Instead I’d like you to feast your eyes on this choice morsel of world’s worst design – ever.

A design courtesy of one of the three “successful” winners of a bid to supply transportable homes for the poor devastated folk in Christchurch, this design is beyond inept and deserves to be sunk without trace. Let’s hope that the poor burghers of ChCh just stick two fingers in the air and resolve to stay in their crack-ridden ruins than lower themselves to submit to such an appalling piece of design. I mean, honestly, what were the designers thinking?

It is fairly obvious that no architect was involved – but I doubt if the person who drew the plans has really ever designed more than a dog-kennel or rabbit-hutch before. I’m speechless at how bad it is.

Luckily, someone at Project Freerange has been able to put it into words more coherently than I can, noting that it: “reveals some peculiar planning” and has:

” * no laundry,
* it appears that the kitchen is completely walled in,
* you canâ€™t get to the 2nd bedroom without climbing over the couch,
* the master bedroom 3/4 the length of the single bed,
* inefficient separation of kitchen and bathroom plumbing.”

That’s what happens when you leave a Brownlee or a Joyce, an English or a Key in charge of something important: they cock it up. It’s not like the good folk of Christchurch are slum dwellers escaping form a shanty town in Botswana – they have come from decent homes with decent designs and probably even decent neighbourhoods – and to offer them a piece of substandard housing like this is really insulting. I’m not expecting it to be high class sophisticated design – you’ll never get that if you have a three bedroom “house” in a 50m2 shoebox – but it doesn’t need to be as bad as all that.

Can the readers of the Fish do better? Not that I think you should give your intellectual copyright away for free, but honestly – truthfully – we can’t let something as rubbish as that get promoted.

Feel free to send me in an image – anything – scanned, photoshopped, pencil, or pen – anything better than this wins a beer at the bar with the fish of your choice. Email us now.