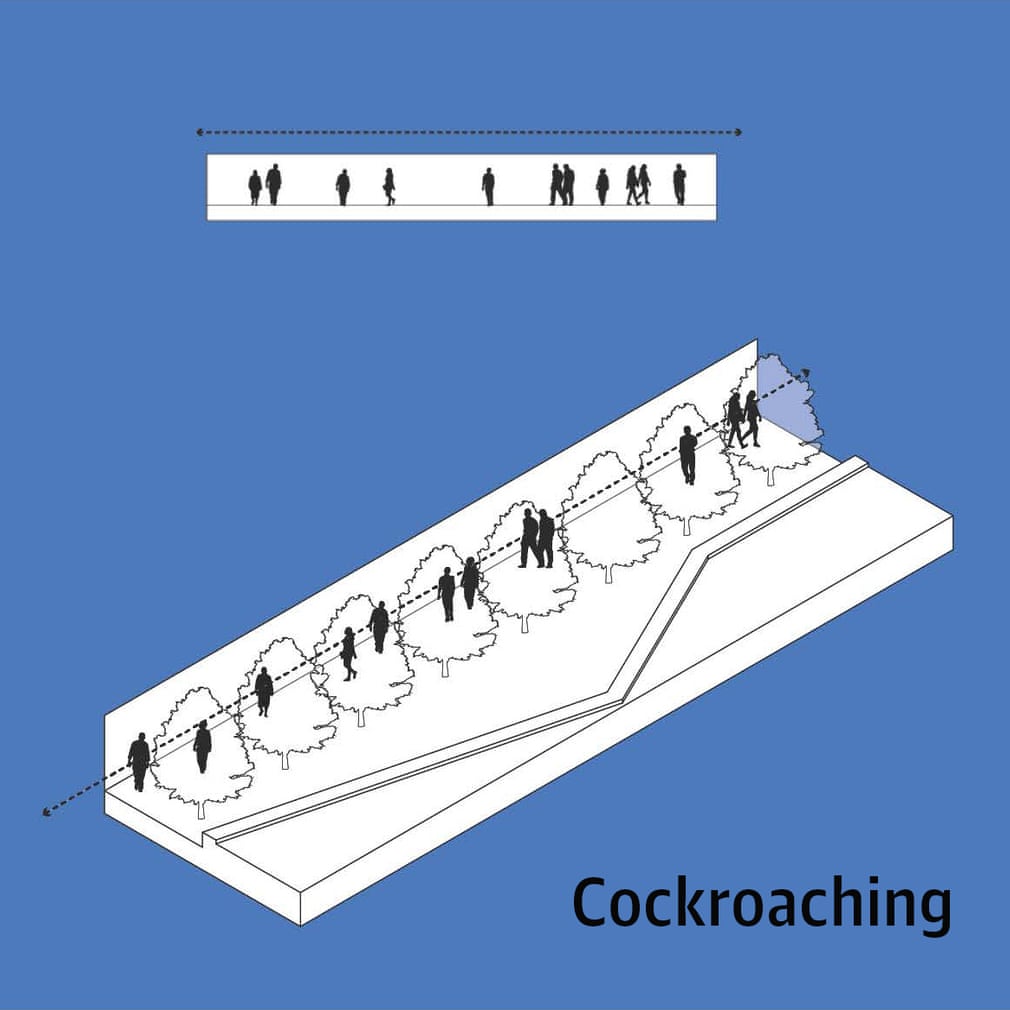 We’ve always been interested in the way people congregate in the human world. Coming as we do, from a Fish background, fish behaviour is easy by comparison – generally, we stick to the School system. All bunch together and move with the rest, or else you get eaten. But it is not that simple for the Human world, where you are the Apex predator, and feel no fear – or at least that is what I have heard. What do I know? I’m only small fry.

There is an interesting article therefore in the Guardian, citing some newly published research, where they are looking at a multitude of ways in which humans like to occupy a space. Jan Gehl touched on this a decade ago when he visited NZ and was working for the WCC on a report on how to get better spaces and a more walkable city.

The following pictures are from the Guardian article – I’d urge you to check out their full article – but the book itself is: A Field Guide to Life in Urban Plazas. You can find more about the authors here.

Cockroaching, for instance, is when: “People liked to move along building edges. Pathways sandwiched between plazas and adjacent buildings were well-used, especially as cut-throughs. These corridors were successful even if they were very narrow (5ft-7ft wide) and even if the building edges were not well activated.“

Pitstopping, by comparison, is when: “Plazas that incorporated crosswalks or sidewalks resulted in pedestrians slowing down or stopping on their way. Extending adjacent pathways through a plaza resulted in increased dwell time and increased overall use of the space. People who used pathway extensions that cut through the central part of the plaza space often lingered more when compared with people who used pathways on the plaza edge.“

My favourite however, is the very accurate description of Lizarding, where: “Soft material in the sun attracted people to recline. Young plaza users tended to bask in the sun if offered a soft surface such as wood or turf. This was observed in a range of spaces of varying elevation. Most often, people basked in small groups of two-to-four.”

There are many, many more examples published on the Guradian website and I’m going to see if Unity can order the book for me, which is hopefully out by now. It is all rather obvious, I guess, when you stop and think about it. If you are reading these descriptions about human behaviour, then my guess is that you probably identify yourself in there somewhere – or maybe in all the cases. Humans react to the specific habitat we find ourselves in, and of course in the city, that specifically human-centric domain we have created for ourselves, then we can truly behave as we alone want to. You wouldn’t catch your average urban dweller lizarding in the jungle, for instance, as we may well end up as some other animal’s lunch.

Winston Churchill once said: “We shape our cities; and thereafter, our cities shape us.” That lovely old quote is as true as it ever was and is one of the prime reasons why I love Wellington so much – good city form, centred around the edge of the harbour. Long may that last.