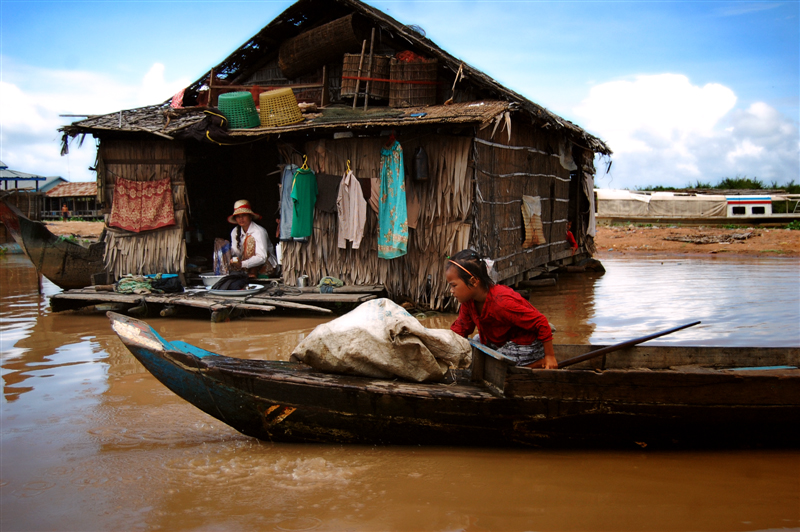 While I went out on a limb recently with a post regarding the Foreshore and Seabed Act, there was some good reactions. Within hours of our post and ensuent discussion on the unfairness to some, the NZ Government announced that it would repeal the Act. Hooray! At least, I think hooray.

While I’m happy that the Government and the Maori Party initially seemed to be agreeing with what the Fish had proposed, things are getting a little bit pear-shaped and ugly round the edges with later announcements. The day after, one Iwi said: We’re having all the East Coast, and today, another says: We’re having the Far North. But they’re all still largely talking about proposals that respect the Fish’s proposed guidelines 1, 2 and 3 at the very least.

The Fish was pretty adamant: no building on the Foreshore! Access for all! No ownership of the Foreshore or Seabed! And then I thought: what IF we could build on the foreshore and seabed?

There are a lot of countries where this happens already – and generally they seem fantastic places to visit. Clearly their laws on foreshore and seabed are different, or don’t matter there. But does it matter here? Well, of course it does, even right down to the very words we use. I trod on some toes rather carelessly it seems, with one commenter to the previous post noting:

“How can you write about the Maori relationship to the land and sea and only use English terminology? Sure, Access, Ownership, Fairness and Equity are important, but if you can write a post about this without referring to concepts such as mana whenua and kaitiakitanga, then you’re never really going to get the point.”

Fair cop guv – but then I’m not proposing to be a bilingual blogger, and even Maori fluent in te Reo may struggle to put those concepts back into pakeha words. They’re just simply not really readily translatable – witness the stoush that has been going on for the last 170 years because of that. So I’ll just keep on avoiding getting into a linguistic battle on that front – and get you all into a visual battle for your eyeballs instead.

I like the idea of living by the beach – and I’m not alone. Most of NZ seems to have wanted a bit of the action over the last decade, and prices have soared away out of everyone’s reach. Of course, Fish do live by the beach, but will naturally have an opposite perspective from you… But instead of the house by the bay being surrounded by a ring of asphalt road with cars zipping past, what would happen if the houses got up close and personal with the edge? While I’m not proposing that NZ could be carpeted around the edges with dinky little suburban bedrooms on the beach, there are some very seductive precedents that we could look at.

First up of course, “the way the world should be”, and the way I suspect we all really want to be: teh Pacific Islands know how to do it well. These are not houses for the locals of course – they’re tourist fodder, and it ties right into our dreams:

Everyone needs a boat if you live on the water, some methods are more eco-friendly than others, such as this example from Cambodia:

There are some advantages of course, to living on the foreshore, one of which is that your need for a car is reduced, because it allows you to do this:

But then of course everyone wants in on the action, and before you know it, it all ends up looking a bit like this example from Hong Kong:

And of course no one ever wants to end up like this:

So, what about this, which is a nice model for the new clubhouse at Lyall Bay. We can see under it, hide under it, look through it, store the boats below it, it’s not damaging the sand dunes, seems to have a lot of plus points going for it…

….much the same as has already been done at Rawene in the Hokianga (the fush and chup shop next door to this house is one of the best situated shops in the country…):

Looking into the future, and with some creative engineering of former oil rig legs, this is possibly what we may end up with: I’m sure that it is what many may dream of:

But when it comes down to it, all I really need to be able to do is simply this: