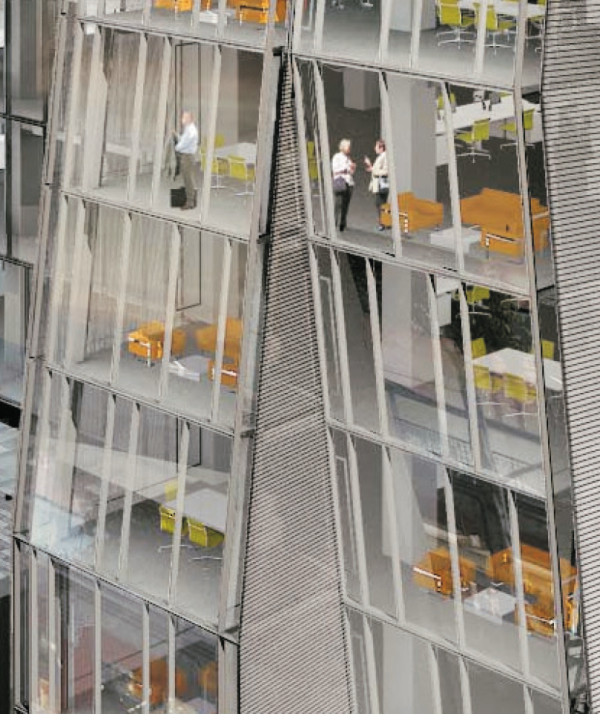 The number of tower cranes in Wellington has come down by one, in a surprise move last weekend. I’m a little mystified why it has come down so soon – its not as if there is a rush on with tower cranes at the moment, and its likely to just go to a yard somewhere and sit there rusting for a while. But even more than that – the job’s far from finished. Curious.

I’m talking about the new Telecom building in Willis St of course – sorry: Willis Central – the one with the crinkly cladding. While the north facade is clad in precast panels, a large blank wall that is playing around with patterns on the concrete (and, when I last looked, had quite a few more panels to go on), it is of course the east facing facade that is throwing up the really interesting results. In an effect that I was not expecting (and I suspect that perhaps Architecture + are also intrigued at), the angled reflections of the building opposite are making the building look like it has brick cladding to its lower floors. Hmmm.

It is not brick of course – just nice clear glazing no doubt with a healthy low-E coating, but that’s what happens when you angle glass towards the sky – it becomes just like a mirror. With the building opposite being Athfield’s newly finished Chews Lane project, then from certain angles there is a lot of bright orange terracotta bricks being wrapped onto the Telecom facade. This will change when the building is occupied – I hope! as the lights come on inside, and then the facade comes back to transparent. At least, the facade looked very transparent when the renders were published here last year:

There’s actually far more interesting things happening at the other end of the site, with the massive former hole that we blogged on now the home to a massive tower that is still climbing upwards. That’s gone up very rapidly – or so it seems – and is looking rather solid. Somewhere in the middle of that is the wonderful atrium space between the two towers. But I didn’t have my camera with me so no photos of that at this stage.

Back down on the Willis St frontage, the old frontage of the McCarthy building is still looking a little lost and forelorn, but will soon start to be restored I presume. Actually, I quite like the aged appearance of the old building, with the grime and black staining from years of Willis St car fumes having a wonderful crusty effect on the facade. No doubt it will get scrubbed up and repaired, but the old St Andrews on the Terrace has lost a lot of its charm since the surface staining was taken away. Is there any way that we can keep the charm of the old facades without tarting them up like a cougar in a mini-skirt?

Just as importantly as that however is the integrity of the building behind the facade. Before the building was gutted, I would take a regular visit to the building, to peruse the goods on display at the Vault (now round the corner at Plimmer Steps), and peek in at the wild colour schemes of John Mills Architects. The great thing about that visit was always the walk up or down the stair – wonderfully proportioned and with the light pouring in from a skylight. From the plans on show, I think (and hope) that the stair at least has been retained in full. Fingers and fins crossed.