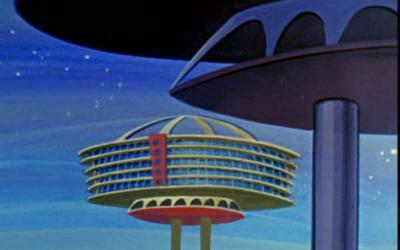 Things have gone very quiet in Serepisos land lately, with not much talk of building the tallest tower in Wellington as a memorial to himself. I’m assuming that perhaps some temporary cashflow troubles may have put a temporary end to that particular dream. And, hopefully, to an end to the ghastly Apprentice spin-off.

But it did get me thinking about tall towers. I’ve always been quite scathing of Auckland’s SkyTower – so were most people in Auckland, until they realised that they could use it as a homing beacon when they’re driving home. At least, they can tell where the centre is, even if they don’t know exactly where they are. To truly triangulate your position, you would need two of course… which got me thinking about what a twin tower might look like. When I started to look at what was available, I was less than enamoured. Really, they’re all just variants on the same design, and who wants to make their city look individual by having something just like every other city? I just don’t follow the logic there.

So: on tall towers: what do we have? As far as I am aware, the ‘first’ is still the best – the Seattle Space Needle, produced for the 1959 World’s Fair, sits next to the Monorail. Wow! In 1959, the future had really arrived. Monorail ! Space Needle ! Jetpacks! There is a glorious Jetson’s quality about the architecture – straight out of the comic books.

At least, I am sure it is – but without watching endless hours of Jetson’s re-runs, all I can find on the interwebs is a small picture of vast circular buildings balancing on small unstable poles. Never mind – the Space Needle excited people’s passions at 184m tall, and yes, you can go up, look around, have a meal, and come back down again. Its obviously just a grown up version of climbing a tall tree for a small child.

Before anyone leaps down my throat and grabs me by the gills for suggesting that the Space Needle was the first, yes yes, of course there was the Eiffel Tower produced back in 1889, and others in between, but as far as I am aware, the whole push for the moon excited the architects and stimulated their designs just like the fins on a 59 Cadillac. The Space Needle was like nothing before.
Ah well, on with the search for more tall towers. Sadly, the Space Needle does not even make the main list of tall towers of the world – hosted of course on Wikipedia. It is down on the 3rd list, featuring the also-rans. Amazingly, Auckland’s rather pointless big pricker ranks highly, being the tallest tower in the Southern hemisphere, and coming in at an almost respectable 26th tallest in the world.

So what does make the grade? For years and years the tallest spot was always taken by the CN Tower in Canada, and it still does, since 1975: just, because it is open, is 553m tall, and the top two are still under construction. CN Tower was designed by Webb, Zerafa, Menkes, Housden Architects, and engineered by NCK. It is a fantastic looking tower, very swept form and effortless looking structure, with a ring of accommodation seemingly dropped onto the spike and wedged halfway down.

There are two new towers under construction – that I hadn’t even heard of – one in China (at 2nd position), which, luckily, is gorgeous – being designed by Arup and IBA: Dutch architects Mark Hemel and Barbara Kuit.

and one in Japan (the Tokyo Sky Tree – under construction, and already at 1st position).

Tall towers have to be ranked strictly on the basis of being self supported – so, that rules out buildings, as you or I know, with sensible things like floors between levels 0 to 200. The official ruling is, get this: “a building in which less than 50% of the construction is usable floor space”. Inherent redundancy built in, right there. So the Burj Khalifa is ruled out, despite its amazing 828m height, because it is far too sensible, if that epithet can ever be leveled against the Burj.

For the present, I’ll leave you with a view to the future of architecture as seen from the recent future past: