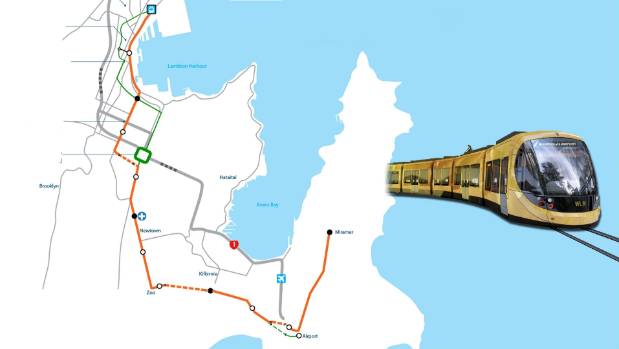 Front page article on the Dominion Post today, faithfully reporting that there is a good chance that Wellington may indeed have a chance at getting a light rail system. That’s quite amazing – not that we have a chance, but that the DomPost hasn’t immediately been sneering about it. Maybe they have a different attitude to it now that Celia has gone.

But what is even more amazing is that the Editorial today in the DomPost is also solidly pro-light-rail and is also not sneering – so, a double coup, and its not even April 1st any more.

This blog has always been hugely supportive of Light Rail as an answer to some of the capital’s transport woes – it is patently obvious that “more cars” and “more roads” is not the answer, and despite the last transport review advocating “more buses”, things have just gone backwards there. Auckland has now, at last, got an understanding that it needs a different solution to cars, and Light Rail is firmly in its sights up there. Wellington of course has an even more convincing case, despite our smaller size, as we already have the mantle of the greatest proportion of rail users and bus users in the entire country. If any city can make it work, we can. While it seems obvious that the answer is indeed a better system of Rapid Public Transport, the key will be the political will-power to say YES, and then to say I DO.

We need, in effect, to become firmly wedded to this idea. The argument has always been “you’re too small” and “it’s too early, not yet”, sounding like a teenage couple trying to have sex, rather than a mature city with a tight set of population centres. The truth is, it will take several years to plan and several more to build, and by that time Wellington will have grown by almost 20% and will be completely choked on vehicle traffic if we haven’t already started then. I, for one, and I’m sure Maximus before me also, would completely support a push for the current Council to grip this seedling idea firmly by the stalk and plant it into the ground now.

We need Light Rail. We arguably need it now, but we certainly need to start planning it now. What can we, the blog, and the public, do to make it come true?