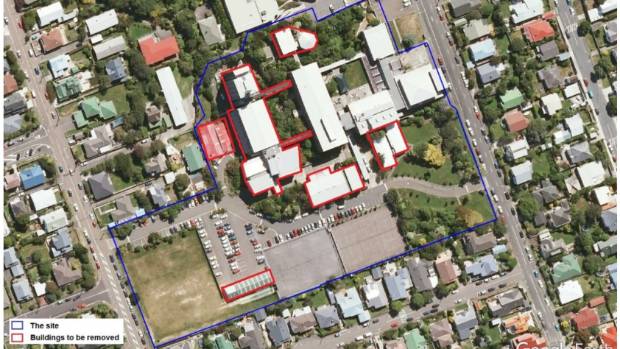 Itâ€™s been a busy week for news so far, and Iâ€™m still hiding in bed from all the coldness. But there is some news of go-aheads: the long-debated Chinese Garden gets the go-ahead, although Iâ€™m not sure if anyone really wants it; and the Shelly Bay housing plan has the handbrake released, so that too can go ahead. There are things to be said both for and against both of those – for debate another day perhaps.

Big news for Wellington is, however, quite extraordinary: Ryman plan to demolish almost the entire Karori Teachers College. Having bought the site from Victoria University in a hugely controversial process, and with the local school desperate for sports facilities and the local people absolutely keen to get some continuing use of the quite extensive sports facilities, it seems that, in all likelihood, Ryman is going to shut everyone out and is set on full-on destruction.

The site is currently occupied by some flat land for tennis courts and parking, but the interesting parts for me are the buildings. The architect was Bill Toomath – one of New Zealandâ€™s finest modernist architects, and the buildings are his finest work. Heritage New Zealand is trying to work towards a Heritage listing for the buildings – which begs the question as to why it does not already have one – but the news today says that Ryman plan to move to demolition almost immediately. By the time any possible listing is granted, the buildings are likely to have already been consigned to history. This is a calamitous fuck up of humungous dimensions if youâ€™re a fan of modernist architecture and the work of Bill Toomath – and a disaster for the local community as well, who look set to get nothing out of the deal. How did this all go so wrong? But first: what are the buildings like that are already there?

The site has a number of buildings on it, and I am not an expert in what is there, but I have visited in the past, and would summarise it like this: teaching blocks in two or three large wings, with a concrete frame and timber inset windows. It is a series of carefully studied elevations, nicely proportioned, and arguably could divide up quite well into apartments for an Old Peopleâ€™s Home. There is a Library space as well, which used to be lovely when it was full of books, but looks pretty lost and lonely now. And there is a gymnasium space, perfect for a community facility, and it is a pretty wonderful feeling space, with lots of timber and light. There are also a couple of Lecture theatres – hugely sculptural objects from the outside – Iâ€™m not sure what they are like from the inside. Thatâ€™s a piece of architecture that is more difficult to fit into the architecture of an Old Peopleâ€™s Home (or, no doubt, an Aged Care Facility, or Happy Life Retirement Village, or whatever spin Ryman want to put on this), being all full of steps and level changes etc, but there is no denying that it is still a pretty iconic, punchy, and arguably quite beautiful piece of architecture. There is also a small Maori Marae lying somehow at the side of the teachers college, which I am not sure whether this is part of the deal with Rymans or not (looks at map – is aghast to find it is planned for demolition – ye gods, they’re targeting Maori cultural heritage as well!).

Lying in between all this, or at least in between a couple of the main wings, there is an absolutely gorgeous secret moment of wild native garden – ponga tree ferns and generally green wilderness, with two magnificent bridges spanning across – its nice to walk across, but even nicer to look at, especially from underneath. Talk about Magic Moments ! There are some great photos of that over on the Architectural Centre website, take by one of their talented photographers, Michael Dudding.

There are some valid criticisms though. Itâ€™s certainly not all scent and roses. I know that some of the former teachers who were taught in the buildings hated the buildings – mostly in that classic way that New Zealanders tend to dislike anything that does not have timber weatherboards and a pointy roof. Thatâ€™s a hard thing to battle when youâ€™re made of concrete and have flat roofs everywhere. But they also had criticisms that it was a rabbit warren inside – and Iâ€™d agree with that – having got lost there many times, both on the inside and on the outside (its not just me being an idiot – there was a confusing room numbering system, several staircases, two bridges, and at least three different entrances). But while some of the former inhabitants and maybe even some of the local residents may cheer at the prospect of demolition, I doubt that anybody is going to be cheering at the prospect of destruction of the bridges, the gardens, and of course the building over of the tennis courts.

You may be more familiar than me with the buildings. Want to share your feelings here?