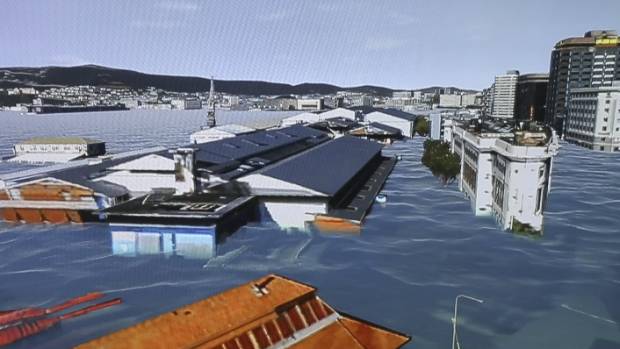 For various reasons, I’ve got a huge interest in Sea level rise, both here in Wellington and around the world, but I shouldn’t be any different from anyone else. We should ALL have a strong interest in sea level rise – it sort of goes hand in hand with global warming and climate change. So, when I saw this quite cool article about Wellington City Council having developed a way to see Sea level rise using Gaming software, I thought it was a kind of neat idea. I’ve fiddled around trying to show this before – but the software I had was kinda clunky and didn’t like doing this – so, seeing it happen instantaneously I view as a real bonus. There’s a link to the article on Stuff here. Wellington City Council innovation officer Sean Audain said it was “much easier to show people than to explain the impact of sea level rise would have.”

So far, so good. In theory it is quite a simple task – the WCC has had a 3D model of every building in the city for some years now, and they have contour plans, and putting the two together gives you the chance to play around with the base line. Chuck it into Unity or some other gaming engine, and Bob’s your uncle – push the lever and the water goes up, flooding the lower lying landforms. Like this one:

Hoever, once again, I made the mistake of reading the comments on Stuff. I know, my own fault, I should not have read the diatribe of bile and filth that is the outpourings of some Stuff-readers minds. The photo above is from Stuff, and may be showing the full 6m level rise – but from the comments online, it was as if the possibility would never exist. Some human beings think of things in such short-term prospects. Read these….

Ziggaty: Since sea levels have been taken since 1870 Nasa has shown that these have been consistently shown to be rising steadily since. Their records show no accelerated sea rise in this time.

Columbusknew: Do people realise the sea has been rising by 1.6mm per year since the little ice age ended in late 1700… All rubbish based on fudged facts and hysteria. When will people look into the facts themselves and not rely on the political message being thrust down our necks by the one sided UNIPCC?

Merv: Scary stuff eh? There are some real clever people out there who can simulate anything.
But hang on. I am not a believer in climate change or rising sea levels so I am unconvinced.
Before you shoot me down, I have a simple question.
How much has Mean Sea Level in Wellington Harbor risen since records began?
I was always taught that MSL never changes.
Go on tell me!

Well Merv, i find it rather sad that you are “not a believer in climate change or sea levels” as it is just science – not opinion, but science. The science is pretty unequivocal nowadays – records of CO2 in the atmosphere have changed drastically since about 1850, when the British started off this whole industrial revolution thing – what with the spinning jenny and the steam engine, firing up on a whole lot of coal (dead dinosaur-era greenery) and on and on to the present day. I’ve ranted about this before here where I noted that:
“I am hugely, uncomfortably aware, that as wonderful as this patch of good weather is, or has been, it is a sign of some really screwed up things happening on our planet…. At present, we seem to be for more like the proverbial Frog in a saucepan of warm water….”

But the climate deniers Ziggaty, Merv and Columbus do have a point – it is not going to happen overnight. It may have only been rising at 1.6mm a year for ages, but what I certainly noticed during Cyclone Gita was that the sea can rise quite rapidly in the space of a few hours. It’s not permanent of course – but a full moon, a high tide, and a stiff breeze (OK – the severe gales we get are a little more than a breeze), have this amazing effect called storm surge – where the sea level can rise by a metre or so under those conditions. And a metre of sea level rise is nothing to be laughing about. In Gita, people in Titahi Bay got monstered by the extra high waters, as did Pukerua Bay and Plimmerton. It seems that the width of the harbour in Wellington was not really wide enough for the surge effect to happen this time – I thought that Eastbourne was going to get hit badly, but apparently nothing much happened there.

The really big effect of course, will only happen if and when the Antarctic ice sheets melt. They’re immensely thick, full of ice, which is also the largest reserves of fresh water on the planet – and the last time they melted the world had a lower CO2 level than we have now, and the sea level was several metres higher than we have now. In fact, if you know what you’re looking for, you can still see evidence of the sea level back then, from the landforms present now. In other words, the scientists are predicting that the ice sheets will indeed have a lot of melting – and if the West Antarctic ice sheet fully melts, the estimate is that we will get a 5m sea level rise – or more.

Which puts that picture up above into a different light. As in: we’re totally fucked, in a 100 years or so. So, Ziggaty and Co seem to say – why worry now? Wait till something happens / if / whenever it ever does. Or of course, we could do this other thing, called planning. Call me an old fashioned fusty old fish, but i like to plan ahead. Am I wrong to do so?