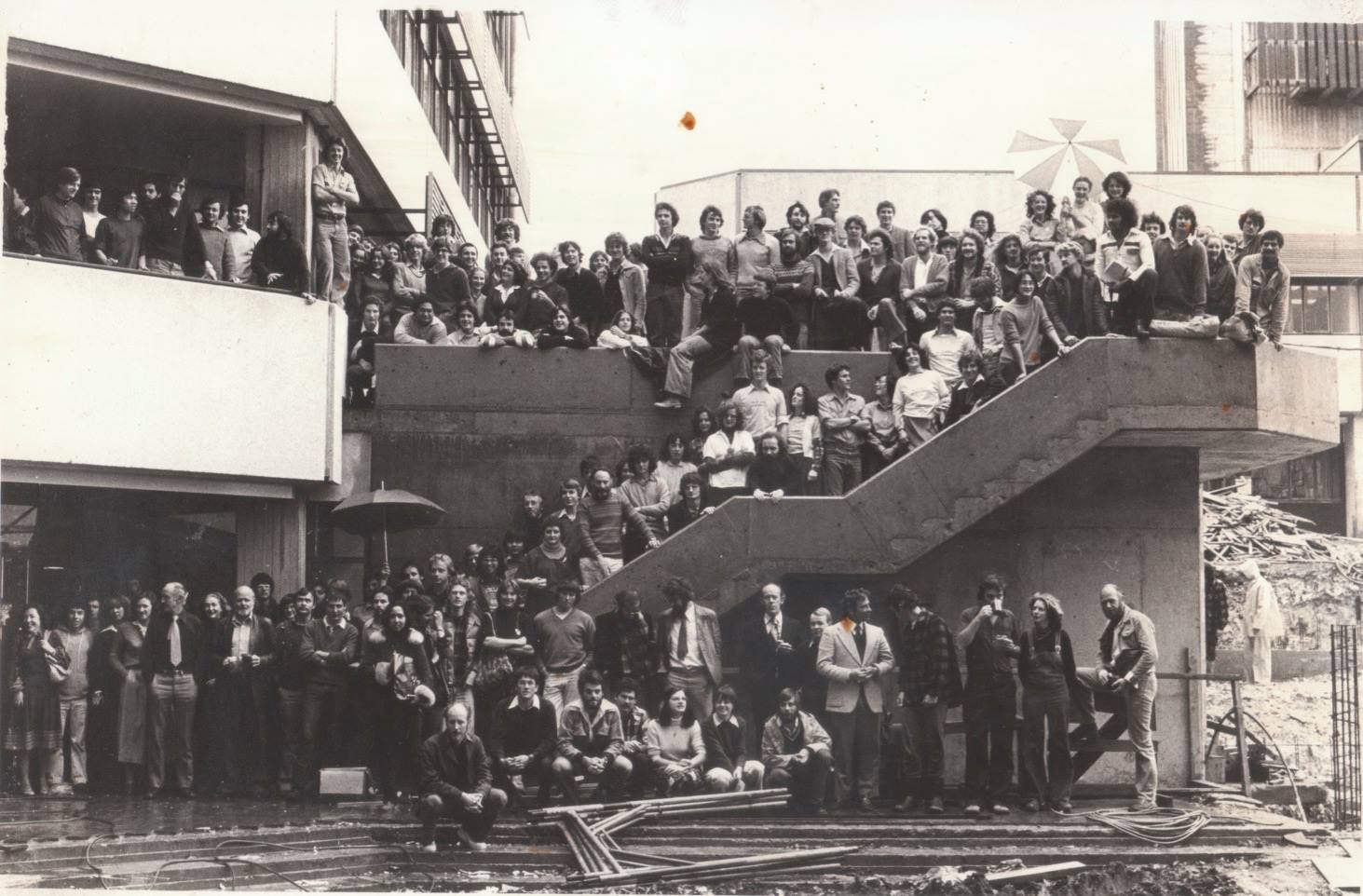 Although this is a Wellington-focused blog, there are some matters in Architecture that go further afield than our small corner of the world, and sometimes we venture forth. One of these, looked at today, is the Auckland Architecture School Library and Archive, an integral part of the Arch School at University of Auckland. It is, it has to be said, the best architecture Library in the country – perhaps even in the entire southern hemisphere – with the rest of the School effectively built around it. It occupies a central position on the School campus, and is a focus of the actual Studio buildings that surround it, and it provides a backdrop to Architecture before the School of Engineering starts next door. A wide, pleasant pathway encircles it to the south, providing a link between Architecture and the Engineers.

Of course, it is not the outside that matters, but the inside and what it contains, and here it excels. Inside a lofty double-height space beside the Design Theatre there is a superb collection of books and magazines about architecture, but there is also much more beside. The collected best works of architecture students from the last 100 years (the School of Architecture recently celebrated itâ€™s centenary) festoon the walls and the top of the bookshelves – models galore, drawings and sketches on the walls, the very best of the best. There are original drawings by Gummer, models of the Auckland cathedral by Doc Toy, fragments of carved Egyptian sarcophagi by a generation of John Dicksonâ€™s invigorated students, the Hagia Sophia, a vast poster of the Acropolis, houses by classicists, modernists, post-modernists, and anarchists. It truly is a wonderful place in which to study architecture, to learn about buildings, to understand structures and movements and patterns of time in the history of architecture.

Why do I rave on so? Because the current Vice Chancellor of the University of Auckland, Stuart McCutcheon, is proposing to destroy it. To remove it, in its entirety, from the Auckland campus. Oh sure, the books, or at least some of them, would make their way across to the main Library, to be shoe-horned into the main building, but the Library would be destroyed as an entity and a source of knowledge. Instead of having the learning facility at the heart of the School, right there where everyone can see it and use it, the removal of the Library would spell a certain end to the autonomy of the School as a learning citadel in its own space. In theory it would force students across Symonds Street and down a full block into the heart of the main campus, in order to study or find that special book. In practice, the books would become unread. It is hard enough to convince students to leave their desks and computers and walk downstairs to read a book (why bother when google exists at your fingertips?) so the prospect of more than one or two students a day making it down into the main campus is low to non-existent.

Books that are unread become detritus that is dumped. Every year the Wellington City Library has a purge of volumes that have sat unread for too long, where they are turfed out the door for a sale price of a dollar or fifty cents. Or free. Or else they are taken, unceremoniously to the dump. A Library unused is a sad thing – a source of knowledge, abandoned. In Auckland, the proposal is to remove the entire Library.

So why is this happening? The answer, as always, is McCutcheon. He is the highly-paid hatchet-man extraordinaire, currently at Auckland but he has made his mark at other Universities around New Zealand, leaving a tale of destruction wherever he goes. You hire McCutcheon when you want to make cuts, make savings, and generally shake up the system. Perhaps University Councils think that they can hire him and have him tamely restructure departments without upsetting the furniture, but that vision never really happens. McCutcheon is the attack dog and that means he has a license to terminate and destroy things. What he plans to do here, is to â€œclose the libraryâ€.

â€œAnother 45 jobs being cut at Auckland University are “just the tip of the iceberg” to come, the Tertiary Education Union says.
Union organiser Enzo Giordani says the university has proposed cutting staff in its libraries and learning services by 45 over the next few years, closing branch libraries in the music, fine arts and architecture schools and at its TÄmaki and Epsom campuses.â€

â€œVice-Chancellor Stuart McCutcheon warned last October that the university faced a deficit of $11.8 million which would have to be met partly by cutting staff numbers.
He said then that the university could not let academic staff/student ratios worsen because that would affect teaching quality and university rankings, which are crucial to attracting international students.
“That only leaves professional staff such as administrative services and student support services,” he said.
He said the tight budget could also force cuts in academic staff in fields where student numbers are declining, such as arts and education, although there could be staff increases in expanding courses such as engineering.â€

Some of us would argue that this route of action is a bad route to take. The wrong path. Universities are run by the admin staff (oddly called professional staff here, when they are neither a profession nor full of professors, but weâ€™ll let that slide), and it is the admins and the managers who are really in charge and run the place. The academic staff are focused on teaching – and researching – but generally detest the admin side of their job and are bad at it, according to friends of mine in academia. So, cutting the admin staff actually results in general chaos and destruction all over, as positions are disestablished and new, less-well-paid positions are proposed.

â€œA further 30 or so roles would go when the TÄmaki and Epsom campuses close over the next few years, centralising all services in the main library in Princes St plus two remaining specialist libraries for law and medicine.
As well as librarians, he said the proposal would cut some roles in learning services which support MÄori and Pacific students, students with learning disabilities and students with English as a second language.â€

It is a deliberate tactic by McCutcheon. You have to fight to survive in the modern world, and so he sets people at each others throats. Here he sets admin staff against the academics and Fine Arts librarians against Architecture librarians, Professors of Violins against Professors of Cello, Epsom proponents against Symonds St proponents, Tamaki supporters against Grafton supporters. Quiet, non-vocal positions such as Library staff will need to fight for their very lives to survive the cuts, but who is going to fight for the very buildings and spaces themselves?

Cutting the Library in order to save money on salaries for staff is bad enough, but axing the Library itself is just cultural vandalism on a grand Trumpian scale of idiocy and stupidity, as well as a cultural calamity both for the Auckland Architecture School, the NZ Architecture scene in general, the Historic info tied up in the Archive, and of course, most of all, for the education of the students in Auckland. Consultation on the proposal closes on April 30th. Please help fight this battle.