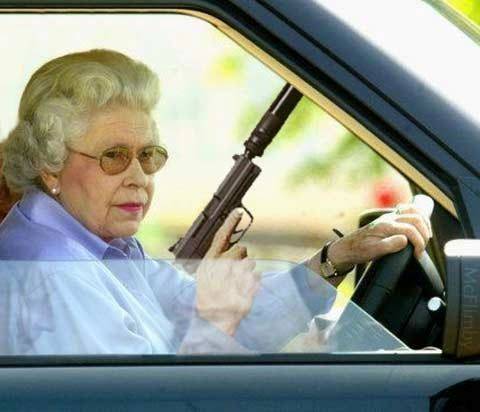 Welcome back! Oh no, sorry, it’s us that has been gone. I must say, I’ve been amazed by the riots of last week – how quickly the thin veneer of civilisation can be stripped away, to be replaced with outright thuggery in a single night. It seems that everyone is affected.

At first it just seemed like another weekend bit of bother, the kind of thing that happens sporadically on hot summer nights in Britain, where they live in stuffy little houses or Council estates, and periodically set wheelie bins on fire. But then it boiled over into something much nastier – not just the wholescale burning of police cars, buses (a bus? good grief I thought, that’s a bit extreme), but then houses, a carpet showroom, and then an entire Sony DVD storehouse. What the heck has got into these feral Poms?

Of course if this situation had arisen in the USA, the result would have been very different. Amazingly, as the UK’s police force do not ordinarily carry lethal weapons, no one was shot – apart, of course, from the innocent man at the very beginning, Mark Duigan. But you can imagine what the death toll would have been if the cops or indeed the general population had, or used guns regularly. Much like what these readers from that right wing publication The Telegraph say:

burnside2:
“There is no point in doubling or adding another 10,000 Police to the control of the situation if this simply doubles or trebles the number of Police simply spectating!! If there is a solution that the riff-raff understand it is retaliation!!!
Get stuck in, chase them off the streets spray them with luminous paint for ease of identification later, cancel all public transport after say 6-30pm and let the dogs loose after not having been fed!!!!
Police have the right to carry a stick – the thugs do not – so no contest!!!!! The Police need some guts -not shields – the thugs can not take aim if they are running for their miserable lives!!!!!!”

Riff-Raff. Hmmmm. I don’t think I’ve heard this phrase used seriously since my days as a spotty young fish reading Biggles (apart from screenings of the Rocky Horror Picture Show of course). You can easily imagine that “Burnside 2” has white hair, stiffly starched collars, drives an Austin Princess kept in immaculate condition (last of the proper British cars, don’t you know)… However, this chap has some more suggestions:

david_w
“Suggested action: It should be a criminal offence to cover your face or disguise your facial feature without legitimate cause.
All police vans should be fitted with water cannon and some officers should have powerful water guns to spray indelible dye on anyone apparently engaged in illegal activity. Plastic bullets or Tazers should be used in extreme situations. Could nets, similar to those used to capture wild animals be deployed?”

Yeah, cos that banning of face coverings is working really well in France and Belgium now, isn’t it?

Ezra Limm:
“It astonishes me how such anarchy when police have firearms. Ever wonder why countries with far more inequality dont have such problems? (Think China).
1) Declare an emergency.
2) Give police the right to detain/tazer/pepperspray anyone with a covered face during an emergency.
3) Arm police with video cameras and shotguns.
4) Actively encourage / financially reward police officers for their KILLS during the emergency period. Any violent rioter caught on tape is fair game for a bullet in the head. Kill a rioter about to throw a molotov? $500 bonus for the officer. Town saves heaps more as there’s no fire threat.
5) Finally, make the policeforce COMPLETELY UNDERCOVER. Yes,… that unassuming lady in the corner may have a small flipcam recording the looting and now has the right to open fire on you for a big fat bonus paycheck this month.”

and finally, from chuckwoking:
“Why would the army want them, but as targets for bayonet practice? On the other hand large stretches of the Falkland islands still need mine clearance, perhaps punishment detail would do them the world of good?”

For the outcome of this sort of hard-arsed attitude, we have no further to look than America, where in the aftermath of the Rodney King beating (a black truck driver badly beaten up by LA police officers, and caught on video camera), and subsequent trial of the police officers involved:
“On the seventh day of jury deliberations, which took place on April 29th, 1992, acquitted all four officers of assault, and three of the four of excessive force. The riots began on the night of the verdict and would peak over the next two days or so, and continued for a total of six days. A curfew was set and the National Guard was deployed to take control of the situation at hand. Federal troops from the 7th Infantry Division and the United States Marines from the 1st Marine Division were also sent in to take control. As stated previously, a total of 53 lives were lost, and nearly 2,000 people were injured. The material damage over the six days cost the United States approximately 1 billion dollars. A total of 3,600 fires were set that destroyed 1,100 buildings. The rioters targeted stores owned by White and Black Americans, and Korean Americans. The street gangs also played a big role in the riot, as they took this opportunity to fight other gangs, the military, and the police.”

53 dead, 2000 injured, $1 billion lost? So perhaps, just perhaps, meeting violence with violence was not such a good idea?

For a very different viewpoint from the complete opposite end of the spectrum, there’s the view from Russell Brand, who says that :
“Why am I surprised that these young people behave destructively, “mindlessly”, motivated only by self-interest? How should we describe the actions of the city bankers who brought our economy to its knees in 2010? Altruistic? Mindful? Kind? But then again, they do wear suits, so they deserve to be bailed out, perhaps that’s why not one of them has been imprisoned. And they got away with a lot more than a few fucking pairs of trainers.” He goes on to say “As we sweep away the mistakes made in the selfish, nocturnal darkness we must ensure that, amidst the broken glass and sadness, we don’t sweep away the youth lost amongst the shards in the shadows cast by the new dawn.”
Oh god, that sounds pretty wet. You’re losing me there Russell. They’re burning down buildings there!

Well, it was the House of Reeves carpet shop in Croyden, not the world’s greatest loss. Mind you, I’ve often said I’d love to set fire to Godfreys vacuum cleaners storeroom because of those irritating adverts they screen on TV – and have little time for Harvey Norman either. They both deserve to be struck by lightning. But really, I’ve got no sympathy for the rioters, and hope that they are locked away and fed cold gruel, although an explanation of sorts is offered by Nat Tapsley, who says, in an open letter to David Cameron: “Why did you never take the time to teach your child basic morality?” (except that, very cleverly, he is referring to the MPs themselves):
“This is just understandable confusion over the rules of how many houses you are meant to have as an MP. This doesnâ€™t show the naked greed of people stealing plasma tellies. Unless youâ€™re Gerald Kaufman, who broke parliamentary rules to get Â£8,000 worth of 40-inch, flat screen, Bang and Olufsen TV out of the taxpayer. Or Ed Vaizey, who got Â£2,000 in antique furniture â€˜delivered to the wrong addressâ€™. Which is fortunate, because had that been the address they were intended for, that would have been fraud…… Fortunately, we have the Met Police to look after us. Weâ€™ll ignore the fact that two of its senior officers have had to resign in the last six weeks amid suspicions of widespread corruption within the force….. There are parts of society that are not just broken, they are sick. Riddled with disease from top to bottom. Just let me be clear about this (Itâ€™s a good phrase, Mr and Mrs Cameron, and one I looted from every sentence your son utters, just as he looted it from Tony Blair), I am not justifying or minimising in any way what has been done by the looters over the last few nights. What I am doing, however, is expressing shock and dismay that your son and his friends feel themselves in any way to be guardians of morality in this country.

Can they really, as 650 people who have shown themselves to be venal pygmies, moral dwarves at every opportunity over the last 20 years, bleat at others about â€˜criminalityâ€™. Those who decided that when they broke the rules (the rules they themselves set) they, on the whole wouldnâ€™t face the consequences of their actions? Are they really surprised that this countryâ€™s culture is swamped in greed, in the acquisition of material things, in a lust for consumer goods of the most base kind? Really?”

The real question we need to ask here in good old New Zillun (that nice Mr John Key calls it that, so it must be right), is whether anything like that could ever happen here. Well, duhhh, yes, of course it could. While we would all like to think that our dis-affected youth are nowhere near as badly behaved, or mistreated, the results from the last week of the British disease show that that tiny veneer of civilisation is thinner than we think. It can, and does crack.