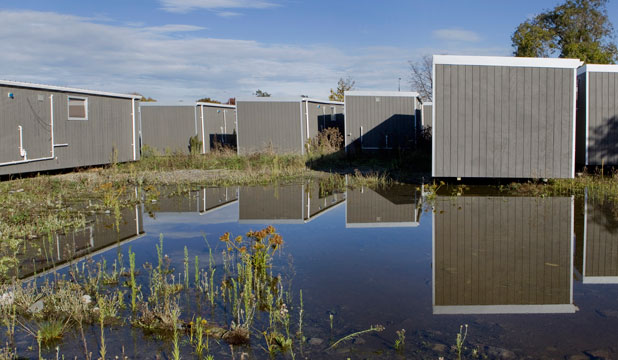 One of the main reasons that we should all be very wary of the Government stepping in to “sort out councils” and “provide low-cost housing” is that, judging by their efforts in Canterbury, they have not got a clue about what they are doing. This recent article in The Press didn’t make it into our papers up here, but the picture tells the story all too clearly:

“The weeds grow tall between 37 government-owned transportable housing units as a second winter of sitting idle at a city site approaches. However, the Government hopes to find a private sector partner to put them into service this year, almost 18 months after they were stockpiled at the Christchurch Women’s Hospital site in Durham St. The Department of Building and Housing, now part of the Ministry of Business, Innovation and Employment, commissioned 50 units after the February 2011 quake at a cost of about $2 million. A mixture of single and two-bedroom units, they were part of a plan to set up living quarters in people’s backyards while their homes were repaired or rebuilt. Once the repairs were complete, the units would be relocated to the next property. That idea was canned because the Government decided to use temporary residential villages instead.”

These housing units were completely derided at the time for their complete lack of design intent and desirability, yet the Government went ahead with the deal, commissioning 50 of them, apparently, but it seems that they were only able to get rid of 13 at most. Nobody in their right minds, even a poor homeless Cantabrian, wants to be shacked up in that most awful of badly designed sheds. Our government, never the brightest cookie in the jar to start with, is steaming ahead with decisions that continue to make little sense. Ex woodwork teacher Brownlee advises that “demolitions are speeding up” despite that the quakes were over two years ago, and we should be in the middle of a confidence building rebuilding boom.

Similarly, about 4 months after the big southern quake, the government announced that it had secured a fleet of 350 Campervans for people to use, while they waited for their temporary house. From memory, only a single van was used in the end – and this was at the end of a cold snowy winter, where people had been camping inside their broken homes with their broken toilets, and dying houses. Campervans are indeed a great short-term measure – needed on about Day One or Day Two after a disaster, but let’s face it, by Day Three you have probably found some alternative accommodation. The response from Brownlee and the incompetent crew at CERA was the right response, but a total 6 months too late, and therefore irrelevant.

That’s what makes me wonder why ministers like Nick Smith and Bill English think that they have a chance of doing this work better / faster / cheaper than local Councils. Paratai Drive in Auckland is pretty low-affordability, as is Grafton Road here in Wellington, yet I suspect that they are not the areas that Nick Smith meant. Can anyone show me one instance where a government department has stepped in and done a good job of providing low-cost housing in an area of low affordability?