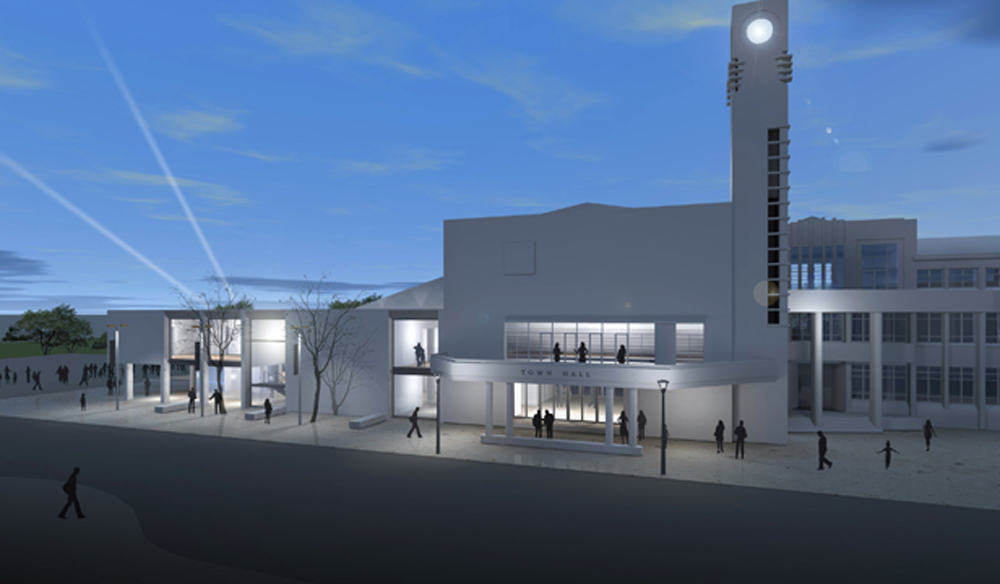 It is a little difficult to know what to make of Hutt City’s proposal to create a conference centre. For a start, you have to wonder if they are really serious, and secondly, you have to wonder why they would want to knock down their best heritage buildings in order to do so.

It’s not as if there is a shortage of land in the Hutt. It is, as we all know, a large flat swathe of land, low lying, and criss-crossed by not one, not two, but three prime arteries: the Hutt River, the Hutt Rail, and the Hutt Motorway. Roading patterns, seemingly added in randomly later, and bearing little to no relevance to the physical layout of the city, weave under and over the bridges of the river and the rail. No doubt it is a nice place to live, but no doubt also the locals know how to get from here to there. For out of towners like the Fish, it is an unholy mess, a ripped parchment badly sellotaped together, a fissure in the continuum of time, and, one could argue if you were inclined to be harsh, a clusterfuck of planning in the highest order. Sorry.

There are of course some jewels in the Hutt, but it is not so much jewels in the crown, but instead more like jewels lying in the gutter, discarded hastily by anxiously departing thieves. These jewels include the Dowse, recently renovated and still rather shiny; the Horticultural Hall; and, ummm, no, that’s probably about it. I’m not going to say that Westfield is a jewel – far from it – it is an enormous midden of discarded detritus, a blot on the landscape, a cancerous growth killing off all life on the streets. It is an inside without a semblance of architecture on the outside – a giant foghorn of rudeness and incivility, blaring out like a fog horn in the morning mist. Warning: here be dragons. I do not like malls in general, but this one seems one of the worst of the worst. A mall without taste? Who would have known… The Hutt City has plans for changes to the city centre, which are admirably forward thinking, in terms of attracting people to the city, complete with apartments rising on the banks of the river. But then again, like Baldrick, they have a cunning plan, which includes demolishing their Horticultural Hall, and their Town Hall, and building a Conference Centre there instead.

I feel for the Huttites, I really do. On the one hand, as we have seen in a recent post, it is the centre of everything, the starting place of Wellington, and the logical place for the region’s main town. On the other hand, as we have also just seen, it is the place that really, no one quite wants to be: even the earliest settlers moved out of in a hurry, after just a few short months, in such a hurry that they rafted bits of buildings across the bay. They’re Just Not Into You. And therein lies the rub: aside from the issue of demolition of the major heritage item, is there not something inherently perverse in proposing a Conference Centre in The Hutt?

The Hutt Councilors and Mayor Ray Wallace must be amused at Wellington (where they have decided to restore the Town Hall / conference centre at huge expense), and by quickly building a Conference Centre in the Hutt, perhaps they can corner the conference market there instead. Or perhaps it is a way to silence those pesky Heritage critics, who irritatingly insist that the Horticultural Hall is one worth saving and strengthening themselves… But the flaw in the argument is, from this very biased Fish, who in their right minds would want to go for a Conference in the Hutt?

Hold on, Huttites, hear me out. I’m not trying to be rude about your city – in fact, the very opposite – I’m trying hard NOT to be rude about your city – but if you want to attract a conference crowd of, say, 1400 people, you need to have room for those 1400 people to stay. And at present, despite an impressive range of small motels in the area, there appears to be only one hotel, the Riddiford, with a total of 22 rooms. There is also the small matter of having exciting side events to visit whilst at the conference (easily solved by having the Dowse directly next door, and the wondrous Westgate centre nearby); and more seriously, the complete lack of transport back to the metropolis of Wellington, where there is an abundance of Hotels. Yes, sadly, when dishing out railway stations in the rail-strewn corridors of the Hutt Valley, the NZR forgot, it seems, to have placed a railway station actually anywhere near the city centre. I’m not sure how people would ever actually get TO the Hutt for a conference, let alone ever get back out again.

So the case for the provision of a brand new conference centre has not yet been made. In fact, the opposite is far more true – it makes no sense to build a centre there. Wellington, on the other hand, if it could get its act together, is well-suited for conferences, both big and small. It has the infrastructure of a multitude of transport running through the town centre, it has a ring of well established hotels all offering service, it has an active night life and a well-positioned series of bars for those evening office-bonding sessions, and it has stunning views and harbour as well – Suprema a Situ indeed. But we haven’t seen enough evidence of what the proposed Hutt Conference Centre may look like, or work like, yet. Until then, we’ll have to reserve judgement.

I suspect however that the elaborate case for building the Conference Centre in the Hutt may have gone like this:
“What are we going to do with those bloody old buildings then?”
“Don’t know Ray, they’ve got a earthquake rating lower than John Banks popularity rating!”
“I’m buggered if I am going to spend money we haven’t got and pay to have them strengthened. Why don’t we just knock them down, and propose a Conference Centre there instead – that’ll be a good money spinner!”
“Excellent idea, I’ll get me ‘dozer.”

Actually, that’s just silly, and unlikely, and I’m sure it didn’t happen that way at all. I’m sure that, like any properly behaving City Council, their Council officers will have been asked to provide all sorts of plans and info. A heritage report on the existing building perhaps. A report on the seismic strengthening needed, without doubt. An architectural review of the existing structures, and also of the proposed structures too, I’ll bet. An economic feasibility statement. A cost benefit analysis. A review of existing services and standing exhibition requests. A feasibility study for a new hall. An analysis of whether a conference centre is viable in the Hutt, or in the lower North Island as well. Something looking at accommodation. Future heritage? All of these things. Finally, someone asking for an architect to be appointed. A call for registration of interest in the project. No idea who has done the proposal, or when, or – really – why. Hutt – i presume you have jumped these hoops?

The Horticultural Hall and its surrounding buildings were at the forefront of the Modern Movement in New Zealand. Ian Bowman’s small 2002 booklet on the precinct (1950’s Buildings – Lower Hutt City’s post-war Modern Movement buildings) briefly notes the history of the buildings there – architects were King, Cook and Dawson for the Town Hall and Civic Centre, with Keith Cook responsible for the Horticultual Hall – rebuilt in 1959 after burning down in ’57. I must have visited the Hall a half dozen times or so, but as you tend to do, when you’re at a model train or custom car club show, you tend not to be looking at the ceiling. I really have no idea what level of detail the inside has, or what it all looks like, other than this one pic i have found. If anyone has any pics of the new proposal, or wants to share them with the Fish’s wider audience, then please post them to contact @ eyeofthefish.org and we can stick them up online. But the building itself is a good, honest, hall type of structure, wide span roof, timber floors and concrete walls, and a lovely clock tower with seven little inset windows, and some go faster stripes on the corners just like a mini-me version of the National War Memorial in the centre of Wellington. The tower itself is proposed to be kept, but the halls replaced. More information is needed!