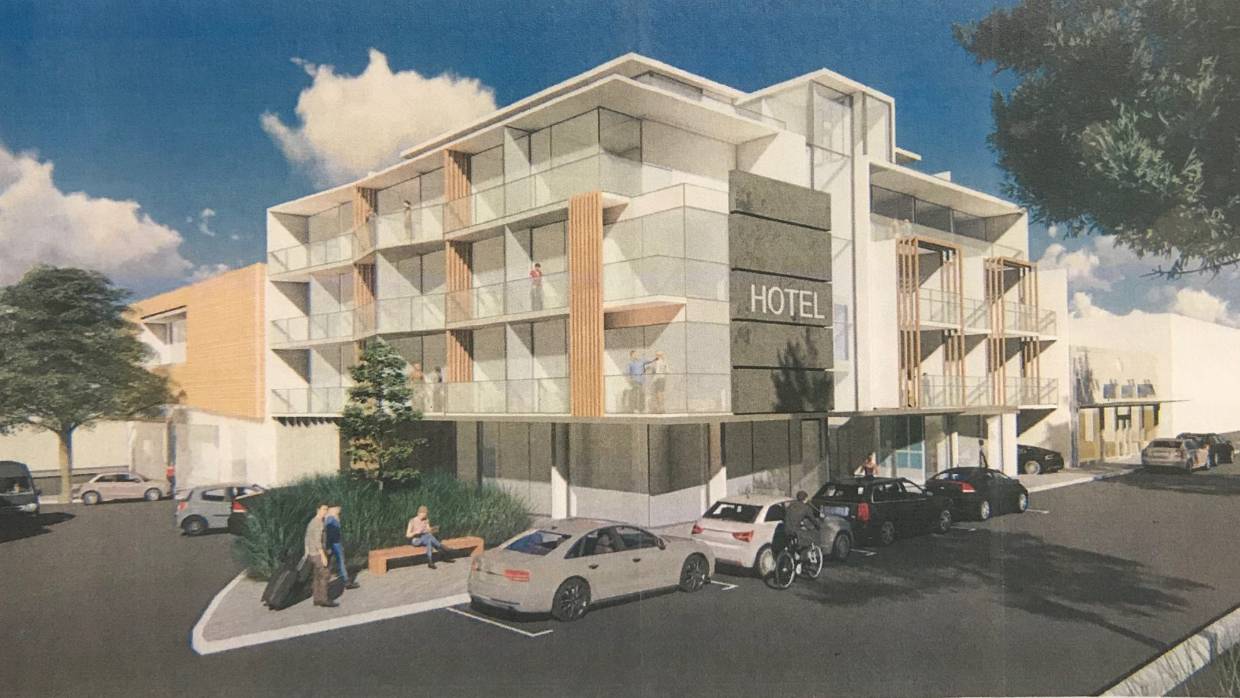 The following story appeared in the paper last week, and I’ve been thinking about the dilemma it poses.

An existing site on the edge of a heritage area – empty, following the demolition of an older building. Napier is one of my favourite towns, with a hard-fought-for Heritage area, encompassing the Art Deco and Spanish Mission architecture of the old centre of Hawkes Bay. Once, many years ago, an 8-storey building was proposed for Napier, just near this site, and that was one of the prime reasons that the Art Deco Trust was started. Tallish buildings were banned, and the existing heritage of Art Deco was retained and started to be celebrated. Now, a new building on this empty site is proposed: a new Hotel.

A vast improvement, I’m sure you will agree, even if it is not “Mock Deco” in the way that some new buildings are in that town. Yes, it is modern, if not Modern, and not really even Moderne, if you catch my drift. It is facing south and east, which I would have thought was never a particularly good thing in a hotel, especially in winter, but perhaps it is aimed at the summer months, when (to be honest) the cooler the place, the better.

It’s not Deco, although it does not jar too much and look too out of place – no idea who the architects are, as Stuff have not allowed the name of the architects to be written online. Shame. But here’s the thing: the old Art Deco Quarter of Napier is staunchly two stories high. Three stories high on rare occasions. More common that it is one storey rather than three.

This new building is five stories high – FIVE. Pretty much double the height of anything in old Napier. And my question is – is this a good thing? If it was in the centre of the old Quarter, I’d say No Way Jose – totally unacceptable. But this is on the edge – almost right outside the edge of the Art Deco zone, so I guess it is a reasonable proposition. Here’s what the Auckland developer has to say:

“The proposed building is 16.11 metres high, which exceeds the 10m maximum height for the inner city commercial zone. The [owner] said the building’s facade would not be “monolithic”, and “draws directly on the Art Deco frontage of the adjacent building, mimicking scale and proportion in floor levels and balconies relative to the adjoining parapet and canopy heights”. “The upper levels are a mix of glazing, metal cladding, and vertical louvered elements. These materials are presented in a number of different configurations to allow interest and to express the form of the structures within the development,” the application stated. It said the fourth and fifth floors would be setback so as to “soften its bulk”, and the impacts would be less than minor.”

“Council team leader resource consents Paul O’Shaughnessy said the application was under review, and an urban design assessment would be required in order to ensure the form and scale of the building was commensurate with the site and its surrounding environment.

“Depending upon the outcome of this assessment, changes to the fabric of the building may result,” he said.”

My question right now is: why are we not afforded similar powers of notification in Wellington?