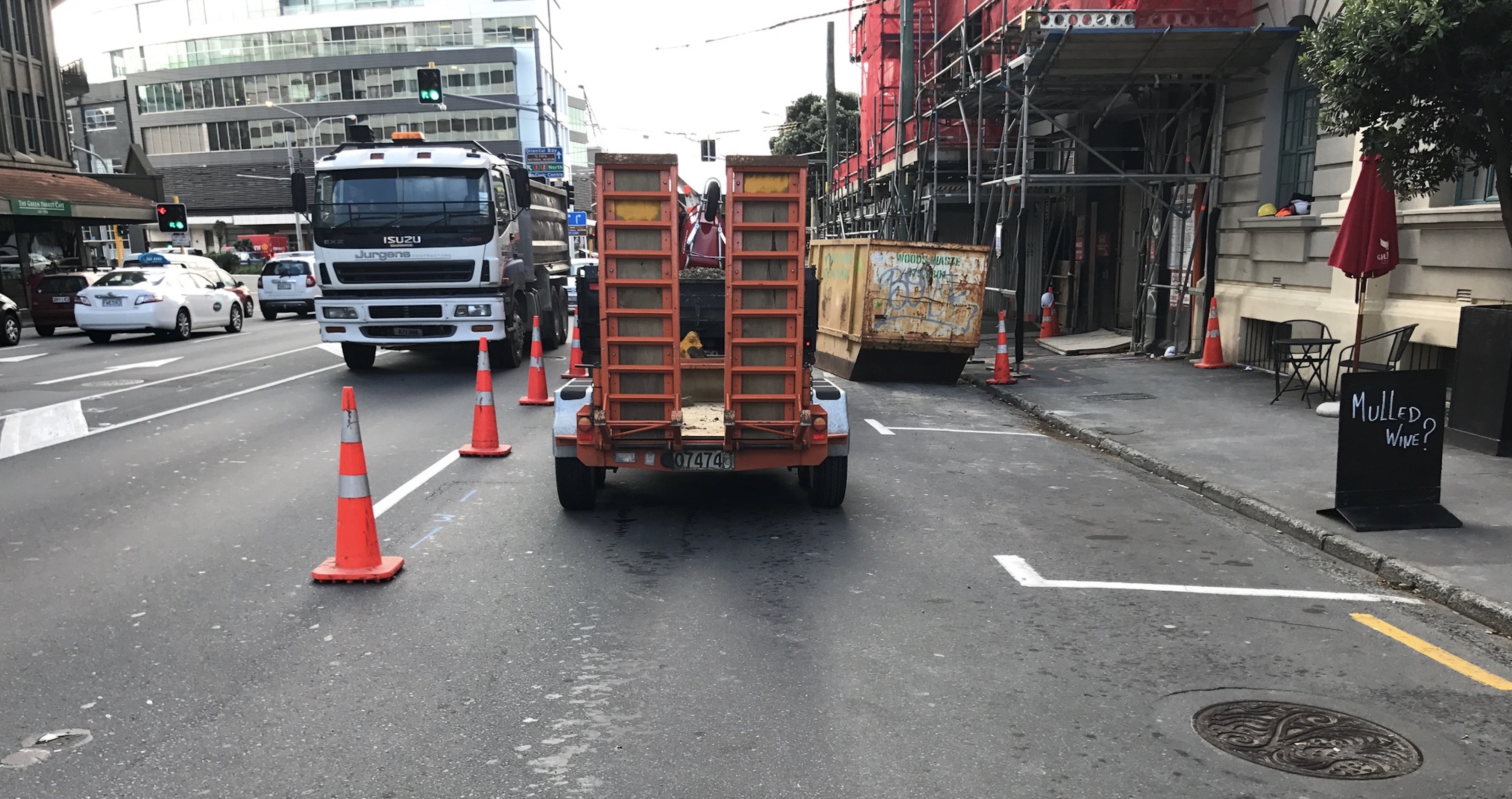 The following is a Guest post from Dominic Kelly, the Director of Hashigo Zake:

For a year and a half, the conversion of the Manthel building on the Taranaki/Wakefield St corner into Xeroâ€™s headquarters caused substantial damage to my business, Hashigo Zake, and to that of our fellow tenant, Zibibbo restaurant. During the period of the work, both businesses suffered a significant downturn in trade, which we attributed to our corner of Taranaki St becoming less attractive to diners and drinkers because of noise and mess created by the construction. We also had to put up with physical damage, particularly from water. For instance on three occasions Hashigo Zake had to mop up small floods because our buildingâ€™s storm water was compromised by construction activity.

The developer of the Xero building was the Wellington Company and the construction company was Arrow International.
Of course weâ€™re delighted that we now have hundreds of Xero staff as neighbours and weâ€™re hopeful that their patronage will make up for the pain of the construction process.

Except thatâ€¦ everything inflicted on us by that construction may be coming back, multiplied.

When 25 Taranaki St was converted from a police station in 2000, the land was divided into two titles. One for the building that we and Zibibbo occupy and one for the carpark behind. In addition, a previous owner of the building that weâ€™re in saw fit to sell the air space above us. The combination of that carpark and the air space of an adjacent property has been tempting developers for a long time now. In 2011 a development called Stalla might have gone ahead if enough buyers had shown interest in the tiny apartments that were planned.

The new plans are remarkably similar to 2011â€™s Stalla. They include a twelve storey apartment building whose top nine floors are cantilevered over the building that we and Zibibbo occupy.

At 39.9 metres, the building will be 12.9 metres higher that the district plan permits. Nevertheless resource consent has been granted. To a lay person reading the report on the consent decision, it seems to have been given because the building design allegedly has merit and apparently no-one is going to be negatively affected by it.
Speaking again, as a lay person in the ways of resource management, this begs the question :â€“ are resource consents for buildings like this considered on the assumption that the building appears finished and in place overnight? Otherwise the idea that no-one is affected by a resource consent like this doesnâ€™t make any sense.

But perhaps this is how the system works and people who might be affected by the construction process as opposed to a finished building are never considered when granting resource consents. So can neighbours such as Zibibbo and Hashigo Zake expect to have our interests safeguarded by some other mechanism? Perhaps thatâ€™s where building consents come in.

Before a building consent is issued there needs to be a satisfactory Construction Management Plan. Iâ€™ve looked at the draft Construction Management Plan for this development, and the council have indicated that it is adequate. It appears to give Arrow the councilâ€™s blessing to:
â€¢ dig up the entrance to our business
â€¢ block our access to a right of way at the back of the building
â€¢ turn the on-street carparks outside our premises into a loading zone
â€¢ conceal the front of our building behind a gantry
â€¢ operate a crane over our building for the duration of the construction
â€¢ do no noise monitoring

The only concession to the concerns of neighbours is a pasted-in section on complaints. I know that it has been pasted in because the wording is identical to the equivalent section of the construction management plan for the Xero building. The section says that complaints will be taken seriously, there will be a publicly available register of complaints and complainants will be kept informed on issues relating to their complaint.

Now during the construction of the Xero building we werenâ€™t told that Arrow had a formal complaints process. The complaints â€œprocessâ€ consisted of us breathlessly knocking on the door of their site office to say that our premises were flooding and could they fix whatever they did to cause it, with a response of no, it couldnâ€™t be anything they did that caused it, at which point we found a way onto the roof of our building to clear away the building material that had been left there, blocking the gutters.

We then took this issue up with the Wellington City Council since it was the Council that signed off on Arrowâ€™s Construction Management Plan. In December I asked whether someone there could supply the complaints register or compel Arrow to produce it?
We were told that the Councilâ€™s Compliance Officer would ask for this register in the new year. And weâ€™ve heard nothing since.
Nevertheless, on January 30, the Council issued a Building Consent to the developer. A consent based on a Construction Management Plan that makes promises about the treatment of their neighbours that â€“ based on recent experience – they have no intention of keeping.