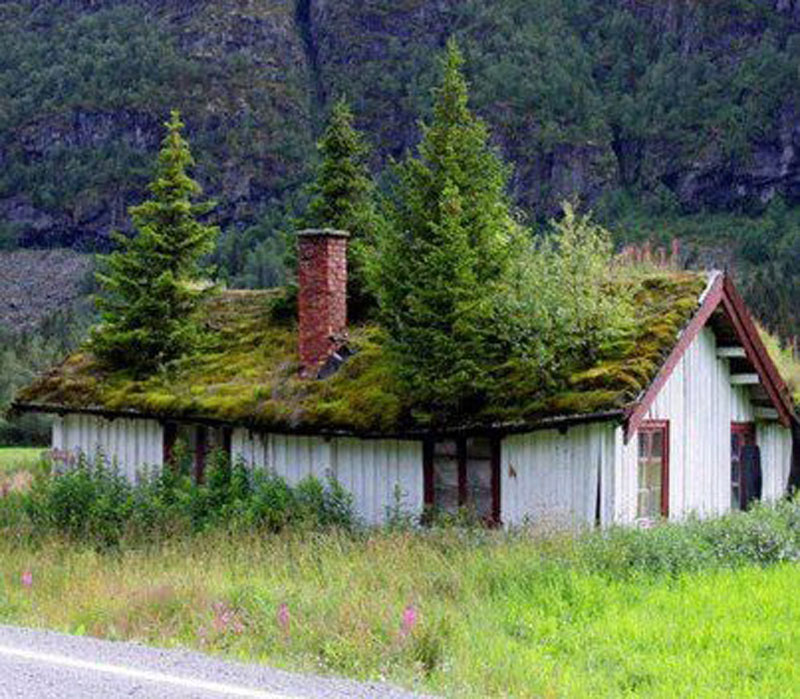 Following on from the last post about Fashion, we all know that Green is the new black. Actually, it has been Green for a few years now, so beige is probably the new green, and possibly puce is the new beige as well, but anyhow: yes, well: Green roofs are certainly IN right now. And green walls. But first of all: the best picture of a green roof that I have ever seen:

Isn’t that luscious?
So often now you see ever hopeful architects planting some pathetic little clumps of sebum, in about 100mm of dirt, weighted down with pebbles (of a size carefully selected that they don’t blow off). But that’s not a Green green roof – that’s a pathetic little woosy attempt at being green, without really committing. I mean, look at that house up above – now THAT is commitment! Think of that tiny carbon footprint! Envy at the credits from the ETS that will be racking up, as the rafters slowly cave in…

Alternatively, of course, you could have a green wall. Now, that’s even more difficult. Basically, as they have found out in the Manawatu Gorge, green stuff doesn’t like to grow vertically up walls, and when made to do so, it mainly falls down again. Green walls take an awful lot of work to keep them looking good. The French manage it, of course, but then the French specialise in looking good under the most extreme circumstances. Here, quite surprisingly, is a luscious green wall in New Zealand. Its not even dead yet!