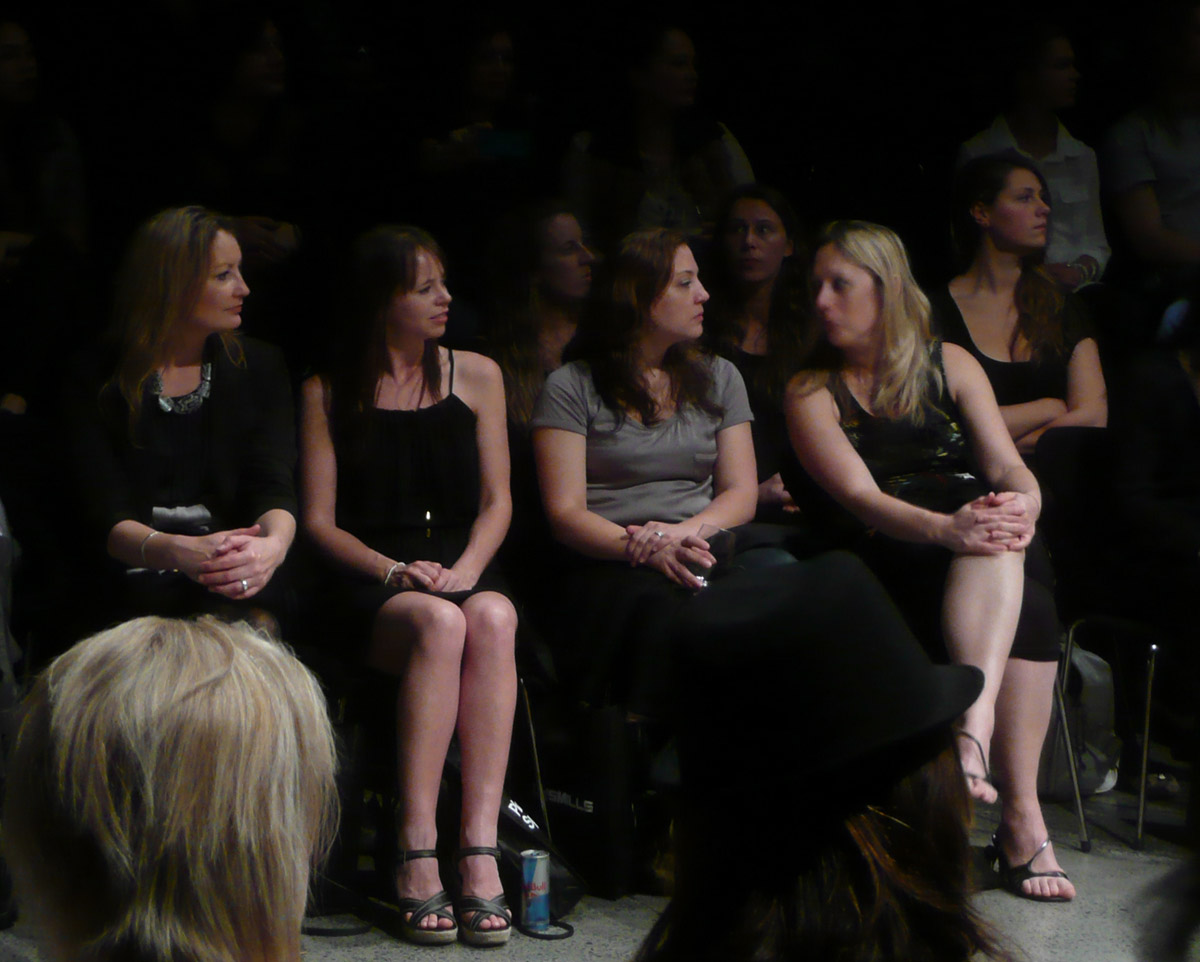 And so it was, that on a blustery and wet weekend, the Eye of the Fish looked upon Auckland, and behold: found Fashion Week. A curious event, populated entirely by small, stick-thin girls, overly frou-frou mothers, and a gaggle of highly camp young men. Of red-blooded, standard gauge heterosexual men, there was no sign: which is odd, considering that the venue was stuffed from head to toe with the very cream of womenhood. Standard costume varied little: everyone has seen America’s Next Top Model, and so knows about sporting a pencil thin, thigh topping short skirt in black, headed off with a flouncy blouse to catch the eye. Black was compulsory. Feet, of course, were in heels: the taller the better, the more outrageous, the more compliments. If not shoes, then booties, or that new inbetweener known to some as shoeties. The flat sensible shoe was nowhere to be seen.

Actually, I lied about the clientele all being skinny – this being New Zild, land of the long wide crowd, not everyone was a stick-thin girl. There were a fair few bulging seams around the panty line. Big bottomed girls make the Rocking world go round, or so Queen said: in this country we must rock on quite hard, judging by the sheer amount of bulging buttocks on (near) display. Nothing wrong with a good pair of kiwi thighs, rippling with well-toned Les Mills honed muscles, although a different output from the fashion catwalks of Europe.

DÃ©colletage, once de rigeur at these events, was absent this year – either due to the extreme youth and skinniness on display, or else because breasts really seem to have gone out of fashion. They can’t have truely disappeared (nope, just checked, mine are still there), but definitely appear to be off the radar for now, hidden, cosseted away, ready to make a reappearance at future fashion shows. So that’s my fashion tip for 2013 girls: put those puppies away, and focus all attention on the boots. Never mind that the boys care more about the bust than the bootie: this is fashion world, and it’s not for men. It’s definitely girls dressing up for girls, in clothes designed by gay men for a purpose to ostensibly snare a straight man, and so it’s no wonder that the men were dazed and confused. Or in this case, totally absent.

It got me thinking about what a strange thing fashion is, and how far removed from architecture it must be. Architecture must be targeted to last a life time, or many lifetimes, with a minimum 50 year life span for buildings – while a Nom D jacket only has to last a season. In one year and out the next. Architecture can’t match that, nor can it last in such competition. I was reading just the other day that fashion designers are starting to move into the architectural field, teaming up with architects to realize their fashion ideas on a larger scale. I couldn’t think of anything worse. The damage done to the world in the name of fashion – crocodile skin shoes, beaver pelts, huia feathers, not to mention just the sheer amount of everyday leather, cotton and synthetics – it just beggars description, let alone rational thought. The notion that your building may be So In right now, but is passÃ© before the concrete has set – horror of horrors.