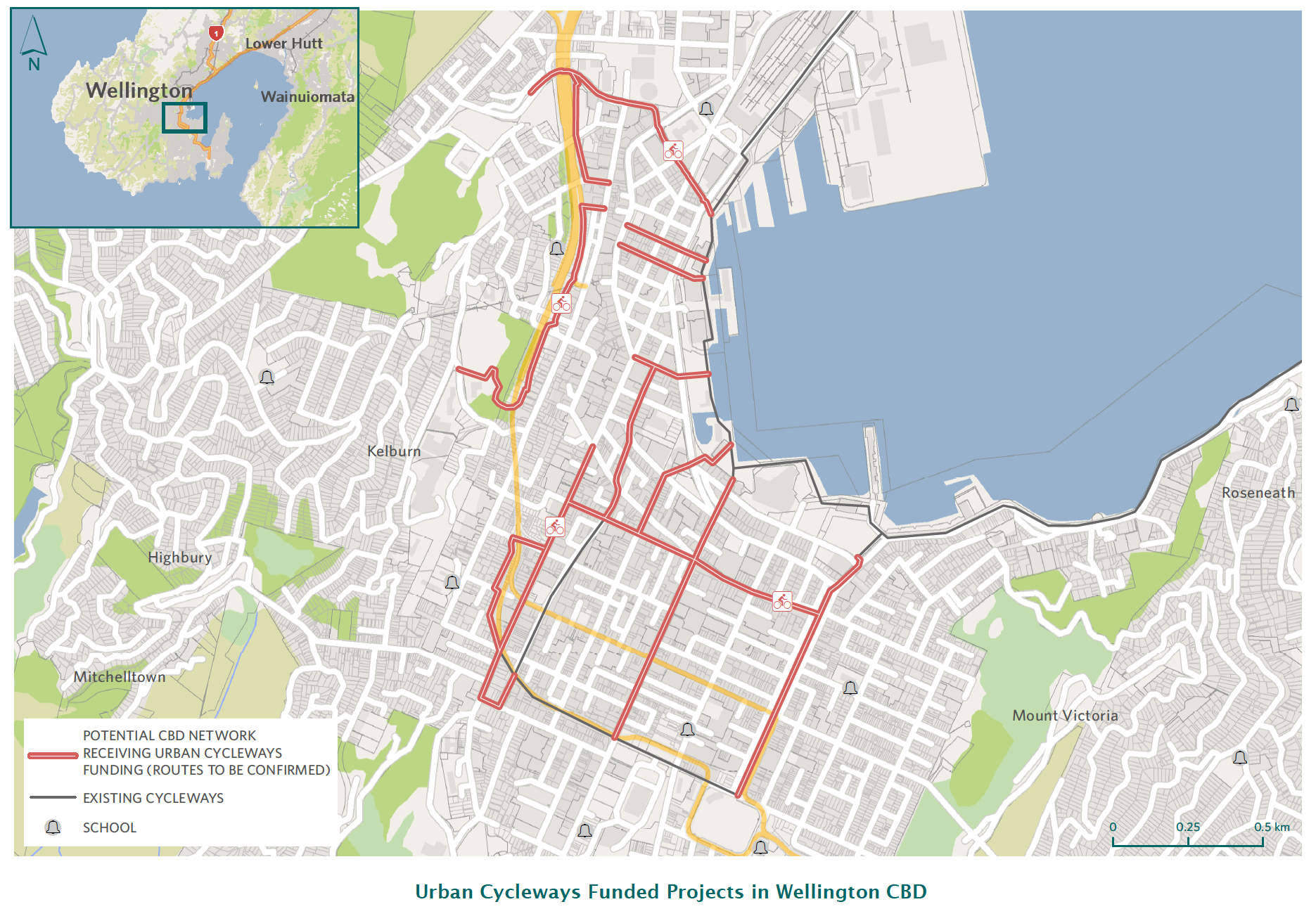 The government took a (in my humble opinion) well overdue leap last night, and announced some decent funding for urban cycleways. Wellington, having at last got its act together, was included. More on this later, but for now, here is the official announcement:

“In 2014, the Prime Minister announced $100 million additional funding for the Urban Cycleways Programme. This is designed to take full advantage of all funding sources, including local government and the National Land Transport Fund, to enable high-quality projects to get underway much sooner than may otherwise have been possible. $9.92 million was allocated to progress the first set of projects in January 2015. These projects are already underway in Auckland, Hamilton, Palmerston North, Wellington, Christchurch and Dunedin. The remaining $90.08 million will be invested between 2015 and 2018.”

and here is the overall map for Wellington (relax, there is more in the suburbs, but for now, I want to look at the centre):

I’ve added on some names etc, so you can make some sense of it in the central area:

And here also in Te Aro:

Just as a cross-check, here is the relevant section from the WCC’s cycle framework, which this week was also passed – just a day before Government published their cycle framework.

There is some parts of this that don’t quite make sense to me, but I’m sure that if I read through the full pile of info, it will become clear. The cycle route along the back edge of the motorway for instance – while parts of it make sense, such as using the unused route for extra motorway (the empty pillars that you drive past beside the motorway), I have to ask – is this an area that a cyclist would want to bike along? Apart from the noise and the fumes, it is halfway up a hill, and I reckon cyclists would be either scooting across it (east-west) or on the flat below it (ie Willis St). Your thoughts?

I’m also intrigued by the proposal for Taranaki St to be given a decent cycle lane. So far we have been promised a grand processional boulevarde there (thanks Kerry – what happened to that?) and now a cycle way as well – certainly something needs to be done for pedestrians and cyclists, as it is traffic carnage up there, with trucks parking in the middle of the road and offloading cars, long queues for the motorway, and back-roaders rat-running across the delicate lanes between. Some joined-up thinking needs to happen here. Seeing as how the Basin Reserve is such a death trap, cyclists either go straight through the middle of the Basin, or take a left up onto Tasman / Tory, which is now a nice quiet road for cycling on. Wouldn’t that be a better route for a decent bike path?

and then another with the overlay of A) in red, the Government proposed cycle paths, and B) in purple, the apparently “existing” cycle paths already installed by NZTA and WCC. It’s interesting to see where the desire lines and the proposed lines conincide, and also where they do not…