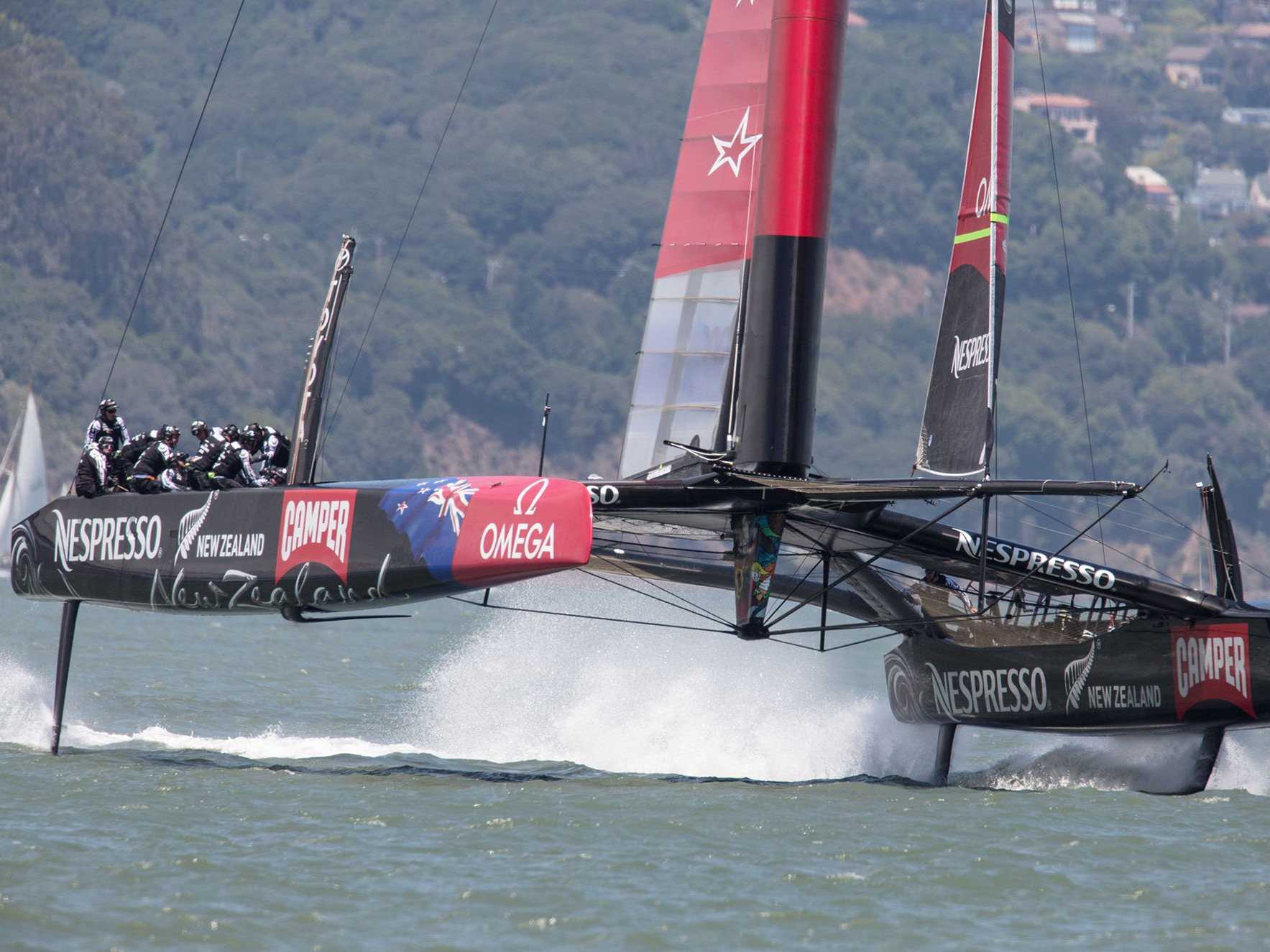 It’s one of those blink and you’ll miss it sort of moments – after years and years of waiting and hype, the America’s Cup races are actually on, and already we’ve had 3 – no, hold it, by now probably – 4 races. And yes, Emirates Team New Zealand has already won 3 of them, giving “us” a lead of 5 matches (and since writing this, Oracle has now won one). Except is it really “us”? We could do this nationalistic thing for ages – how while we’re sponsored by a government, not a rogue billionaire, we are additionally sponsored by the unlimited petro-dollar oil-funding of an Airline of a Federation of fundamentally islamist Arab Emirates, not by a software giant’s ego; how even the bowspit transom-thingee is sponsored by Nespresso, not by Fonterra; we’re driven by Toyota, not Holden (or Trekka); wear Camper shoes, not Bata Bullets; drink Skyy Vodka, and not 42 Below! Ridiculous! And, let’s face it, no-one in this country can afford an Omega watch – we’re more of a disposable Swatch nation. I could go on, but I won’t, except to say that for the New Zealand government’s $36m sponsorship, how much better would it have been to have a giant koru of Air NZ up on that sail, or Anchor milk on the hulls….? Or even, cough cough, 100% pure… Still, as a branding exercise, New Zealand is still getting some excellent airplay in the AC72s.

While others are going to come out and say how brilliant the sailors are, how powerful are our grinders arms, how dashing and clever is Dean Barker, and how the mere fact that you have kiwis in your team gives you more of a chance of winning as if merely by being born in Aotearoa gives you Cook’s or Kupe’s legendary sailing and navigational abilities – despite all that (and I’m sure it must be true – I’m of course a brilliant sailor, at one with the sea, as well as playing rugby for the All Blacks – Jonah Lomu and I are just like that, they don’t talk about Jonah and the Whale for nothing) – yes, despite all that, I’m going to say that the cleverest thing out there on the water is the foil.

It’s the unsung hero of the piece – a Black Stick unlike any other Black Stick you have ever seen, and literally, the whole boat is riding on its success. In a race which is all about what is visible above water, it’s actually what is underwater what really counts, and crucially, the key to counting is to spend the least amount of time underwater as possible. He who foils first, foils fastest, and don’t you forget it. I have no idea what that magical material is that the magical foil is made of – all I can say with certainty is that it must be incredibly bloody strong. It can’t be steel – that’s just not strong enough. It could be nano-fibres, or sheets of graphene, or battle-hardened moon-rocks from planet Zubbety-Zub, but whatever it is, it is not distorting under stress, and yet it still seems to be able to bend. The entire, considerable, and extremely high forces of the entire boat are going through the vertical blade of the foil and bending round into the return thin fin that elevates the whole boat out of the water. 42 knots – over 80km/hr, on a piece of (probably) carbon fibre wing hidden below the water so that they can’t even see it – this is the same sort of dangerous brilliance as balancing on just one leg riding a skateboard while blindfolded, while someone blasts a water cannon at your face and someone else has bet $100 million on your ability to do this whilst televising this to the world.

It’s hard to tell while the race is on, but there are subtle – or in fact, quite large – differences between our foil and Ellison’s, if I may be so proprietorial as to say “ours” and “theirs” – and the boating forum boatdesign.net is foaming at the mouth over this – Oracle has an L shaped foil, and Emirates has a more curvacious, almost V shaped foil. Doug Lord reckons that the kiwi’s foil may even be acting as a surface piercing foil, where the tip has rotated around so much that it almost extends back up to the surface – although I haven’t seen sight of it yet. And of course the damn thing has to be winched up and down each time by those hunky grinders (such a gay turn of phrase…) – which, when you stop and think about it, they’re not so much winching the foil down, as winching the entire moving, speeeeeding, balancing boat back up the greasy black pole that it doing it’s sub-surface magic.

Its the old Black Magic all over again.I’ll hold my breath until Wednesday now…

Postscript update:
I’ve just found a new photo, which I find intriguing and exciting – as you do… This is the first one I’ve seen where the actual rudder is out of the water as well – and do my great big bulbous Fish-Eyes deceive me, or is that a thin keel on the very end of the rudder? If so, perhaps that goes some way to explaining why they are so responsive to turn… have a look at the photo below:

and here’s the sneaky bit in question, enlarged a bit more…