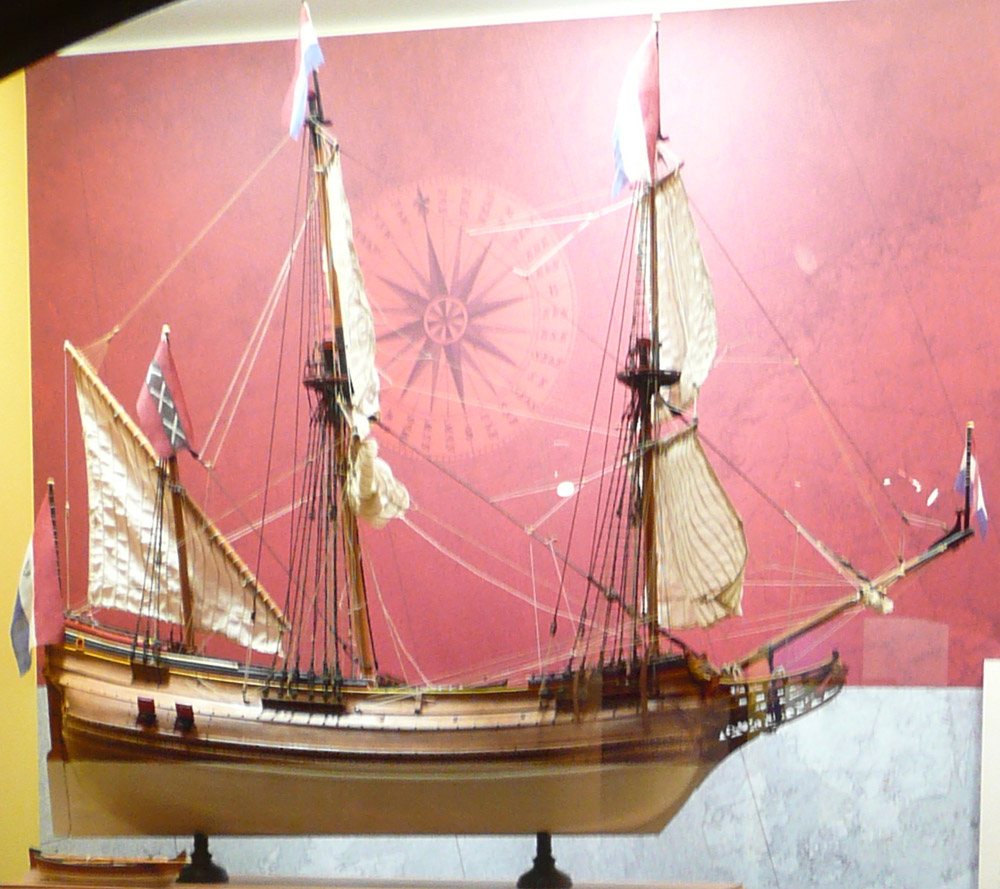 While the big black boat in San Francisco is having a hard time of it across the ocean, I’m starting to get a little fed up with it all, and so life must go on. But continuing the boating theme, how does this (soon to be) historic boat fit in with New Zealand’s proud maritime history? I thought I would have a look at the model boats on display in the Auckland Maritime Museum, starting off with Abel Tasman’s boat, the Zeehaen. Tasman sailed from Batavia on 14 August 1642 with 110 men on two ships, the Heemskerck and the Zeehaen. Abel Tasman, whilst discovering Van Diemenâ€™s Land (Tasmania) and Nieuw Zeelande for the Dutch, approached Aotearoa from the west and on 13 December 1642 the Dutch sighted â€˜a large land, uplifted highâ€™ â€“ probably the Southern Alps.

The Museum, which now goes by a funky name that I can’t remember (something like actually, it’s Voyager), has a lovely display of these model ships, no doubt painstakingly crafted by pedantic old men in back sheds over a number of years – but for me, they’re slightly spoiled by being all at different scales, some with scales noted, some not. I think these first few boats wereresented all either 1:50 or 1:60 and so I’ve tried to keep the photos about the same size, so that you get an approximate comparison between the ships. It’s hard to compare a full size model with a minute scale model.

Cook of course made his first voyage in HM Bark Endeavour between 1768-71, and rediscovered New Zealand on Saturday 14th October 1769. These ships are part of the origin story of New Zealand. They didn’t have a scale model of Kupe’s ship, but they did have a full size model or two or three of the pacific waka. Cook noted, when sailing past the east coast on his way down the Wairarapa, that:

“The face of the Country is not nearly so well Cloathed with wood as it is about Hawkes Bay, but for the most part looks like our high Downs in England, and to all appearance well inhabited, for we saw several Villages as we run along shore, not only in the Vallies, but on the Tops and sides of the Hills, and Smokes in other places.”

The expedition that Dumont dâ€™Urville led in 1826 is considered to be the last important voyage in the story of the European discovery of New Zealand. Jules SÃ©bastien CÃ©sar Dumont d’Urville, on the French vessel Astrolabe, arrived on Feb 3 1827. If the French had been more persistent, perhaps all of NZ (not just Akaroa) would be speaking French. I wonder, if he had hung around more and the French had ruled, what Nouvelle Zeelande would have been like? Would we be more adventurous, more amorous, more talkative, more gesticulative, more betterer cooks?

Who knows?!? Anyway, here is the Astrolabe:

Lastly, here is another model, of a ship called the Parahaki, of which scale is a little less clear. Obviously a tug, and presumably a tug from the past in Auckland, I have a feeling that it is only a little less long than the ships above. Basically, this tug manned by probably only 3-4 men, is almost the same size as the ships that discovered New Zealand, which held over a 100.
Correction: Endeavour and the Astrolabe were very similar dimensions – Endeavour was 32m long and Astrolabe just a smidgen shorter, while the AC72 class are 22m long ie approx 2/3 as long. Emirates boat is far wider though, at 14m wide, while Endeavour was only 9m wide and Wikipedia tells me that the Astrolabe was 18.5m wide (which seems unlikely).
A weight comparison is harder – while we know Emirates is under 6 tonnes, it seems that we’re not entirely sure what the old boats weighted – Endeavour displaced about 368 bm, and Astrolabe displaced about 380 tonnes. Mast height is another slightly murky subject – Endeavour is recorded of having a 25m high mast, compared to Emirates mast of 40m; however we are also told that Endeavour had 2777m2 of sail up, whereas Emirates has only 260m2. So, a mast almost twice as high on Emirates, but ten times more sail up on those smaller Endeavour masts ? I suspect that someone has got some numbers wrong somewhere. The crucial bit, of course, is the top speed – Endeavour could do about 8-9 knots on a good day, while we all know that Team New Zealand can do about 5 times that. There will be some horribly complicated calculation somewhere, taking into account length, breadth, weight, sail area, wind speed and tidal flow, necessary for naval architects to learn. Regardless, one thing is for certain: Cook could never have got Endeavour up on the hydrofoils…

The museum does of course also have a selection of more recent boats, including a great collection of recent America’s Cup contenders and winners. I have a feeling that the latest boat, Aotearoa’s Emirate Team New Zealand, is destined to be found here one day. One more day till we find out a winner….