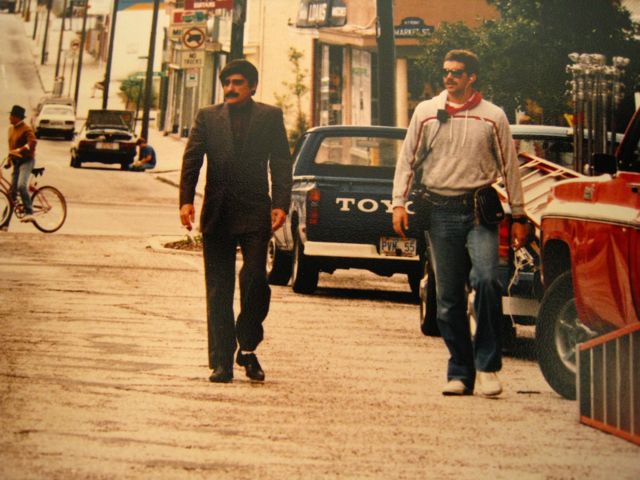 Moving into winter on this cold, wet Monday evening, with the date of 1st April now behind us, and Phil Goff on the radio loudly proclaiming that he is not an April Fool, I thought it would be nice to celebrate the intellectuals amongst us, by having a look at the musings of those that muse upon the city. Sometimes we muse, sometimes we amuse, but there are those that take the notion rather more seriously – someone taking pleasure in pointing out the small things, the history and the background of the world around us. This tendency to observe and comment is put very nicely by one well-read / well-bred chap, Phil Beard, a self-confessed flÃ¢neur who helpfully points out:

“In my mind, the term â€œflÃ¢neurâ€ is indelibly associated with the writing of Baudelaire and the paintings of Manet. A flÃ¢neur is someone who is in the city but not of the city. An intrepid explorer of the insalubrious and unfashionable neighbourhoods and an astringent observer of wealthy and fashionable ones. A collector of obscure information and a connoisseur of the absurd and neglected. The Baudelairean association implies a rather dandified appearance of understated elegance. A flÃ¢neur takes pleasure in the extremes of human behaviour to be observed and delights in the random and piquant contrasts typical of city streets. The worlds of commerce, leisure, travel and architecture come under scrutiny. Something between a social anthropologist and an urban explorer.”

Well put, Dr Phil. Thankfully, we have such a social anthropologist and urban explorer amongst us. There is a new contributor to this erudite tradition within our midst, an antipodean with a Baudelairean lean, who has taken on the task of writing about our national highway. State Highway 1 – or Route One, if you will be so crude. The author, Alf Rune, an aged newcomer to the highly influential Wellingtonista website, has a name befitting a writer of this stature. I have an image of an elderly silvery bewhiskered man, not quite yet with cane for walking, his gangly limbs still swinging freely as he stalks the length of the highway. The journey starts off with a Intro / Prequel, about the whole series yet to come. There is a precedence for this in our New Sea Land, with the elderly AH Reed notoriously walking the length of the country, even to the extent of climbing mountains when he was well into his eighties, and taking the time to note all the native birds and trees along the way. His legacy lives on yet, with books published by the barrow-load, yet all carefully thought through and readable even now – even with slightly arcane titles: “Farthest East. Afoot in Maoriland byways.” Reed was not just pedestrian – not just a walker – he was a topical, prolific and thoughtful commenter as well. Alf Rune follows in his footsteps some 40-50 years later, commenting as he goes, casting observations on the city he passes through. Phil Beard writes again regarding this tendency to comment:

“So, is the designation of â€œflÃ¢neurâ€ entirely honourable or is there a downside? I suspect there are two inherent dangers in excessive devotion to flÃ¢neurism. The cultivation of a cold analytical eye and a studied air of detachment could easily give rise to a profound disenchantment with the common run of humanity that in turn might rapidly curdle into a generalised contempt. Not an attractive quality in anyone. In extreme cases, a flÃ¢neur develops such an intense refinement of sensibility that almost anything that falls short of perfection will give offence. The second danger lies in the development of specialised language and vocabulary with which to analyse and interpret the data gathered by the flÃ¢neur. An active and committed flÃ¢neur gathers an immense volume of disparate information and in an effort to make sense of this blizzard of data it is easy to resort to impenetrable language and over intellectual jargon. It makes no sense to develop ideas in such a convoluted form that virtually nobody can understand them so this should always be avoided.”

But who within our midst nowadays could really take pen to paper, or phalange to keypad, and really finger out a tale of modern walking adventure? As I write here on this winter-laden weekday, scrivening away, with the rain pelting down outside, slushing up on the street far below, I think – it is nights like this that are made to write – to scribble, to scriven, to inscribe a tome with a name or two, and – who am i kidding? I can’t compete with the mighty Alf Rune. Much as I like to think that I can write, the venerable Mr Rune has the well-worn ability to tell a tall tale in a most enveloping way, seeking back through history to unravel the stories behind the things that he passes along the way. Its the sort of ability that only comes to those of a certain number of years, the weight of the world sitting heavily on the shoulders, eyes shrouded in memories of times gone by. I’m obviously too young and inexperienced to be a writer of such significance, although I hope, one day, to have reached a certain gravitas. In the mean time however, if you’re interested, may I suggest that you start here, and read the tale of our national highway in a tale of notional importance. There is a list of all the posts at this link here, on the subject of Notional Significance as relates to our national state highway. Reader: read on:

Just like Julie Andrews, we start at the very beginning, a very fine place to start. Mr Rune takes the Flyer which starts the journey off.
Looking out at the airport, he prepares himself for a Takeoff of a journey which may take many miles and many many days. Lucky you, lucky him, lucky us.
In the next post about the rocks upon which we dwell, Alf Rune ruminates on the Isthmus he passes over.
And then, like the gods entering the underworld, he goes Underground through the tunnel into Wellington proper.
And encounters some Resistance to something. Press forward Mr Rune, don’t give up! Push on!
With his latest post just posted today, all I can do is recommend to you that you become at one with your Inner-Radical and enjoy the easychair tour of the island – he does all the walking, we just sit back and enjoy the ride.

Last words, for now, from the Dr Phil – who I have to say, certainly has a way with words himself, and recommends that our mystery highway stroller continues on his quest alone, dressed, no doubt, in his sturdy, stylish, sensible walking shoes:

“My friends and enemies alike are of one mind when considering to what extent my fashion sense could be described as dandified. All are agreed, the idea is preposterous. No evidence of an unusual flair for dressing well has ever been detected. Whether a lack of sartorial distinction is enough to disqualify me as a flÃ¢neur is a matter for debate. But a more serious reason for disqualification may be a lack of commitment. I suspect it is just not possible to be a part-time flÃ¢neur and any attempt to do so is doomed. …. FlÃ¢neurism is a solitary occupation. A gregarious flÃ¢neur is better described as a boulevardier – an opportunist in search of the pleasures of city life with no interest in observing or analysing anything that does not further their own self-interest.”