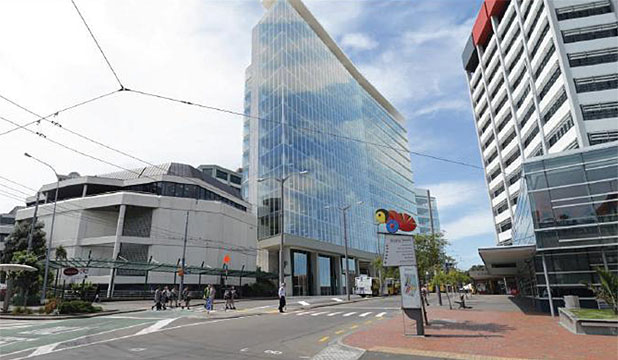 I’ve not got much time to note anything much about this building at present – am still wading my way through the comprehensive Assessment of Environmental Effects – but so I thought I would post it up here in the mean time in case any of you lot have any comments you wish to make.

It is, as noted in the DomPost the other day, proposed for the bus interchange, just near the old Thistle Inn. It is in for Resource Consent at present, and unusually, is available for public comment. The reason for this is at least partly because the building is proposed to be built out over part of the bus interchange itself, and buses will have to weave their way in and out of the columns at ground floor.

As is now usual with RC applications for buildings, the AEE authors have claimed the building’s design is excellent:
“The proposed Kate Sheppard Exchange Building will make an important contribution to the provision of quality office accommodation in a building of considerable architectural merit (design excellence) that will be a distinctive landmark at the northern end of Lambton Quay. The building will add significantly to the dynamism and amenity of the Central Area.” and interestingly, appears to not only retain the little ugly/cute substation building that has captivated Wellingtonians for so long, but even goes further and says:

“The proposal acknowledges the intimate scale of the listed building and draws on that scale to articulate the Kate Sheppard Place elevation and the proportions of the public arcade and lobby spaces with this scale. The proposal is sympathetic in its use of contrasting materials by consciously not seeking to mimic those authentic cladding materials of the heritage building. Similarly, by articulating proposed cladding and scale with reference to that of the heritage building the proposed development maintains and conserves that scale and those values inherent in existing materials and finishes and the patina that those elements have amassed … the proposal seeks to embrace original and currently obscured openings as part of the public access route through the site”.

More on this over the weekend.

And this, from a few years back, is what it was going to look like originally.