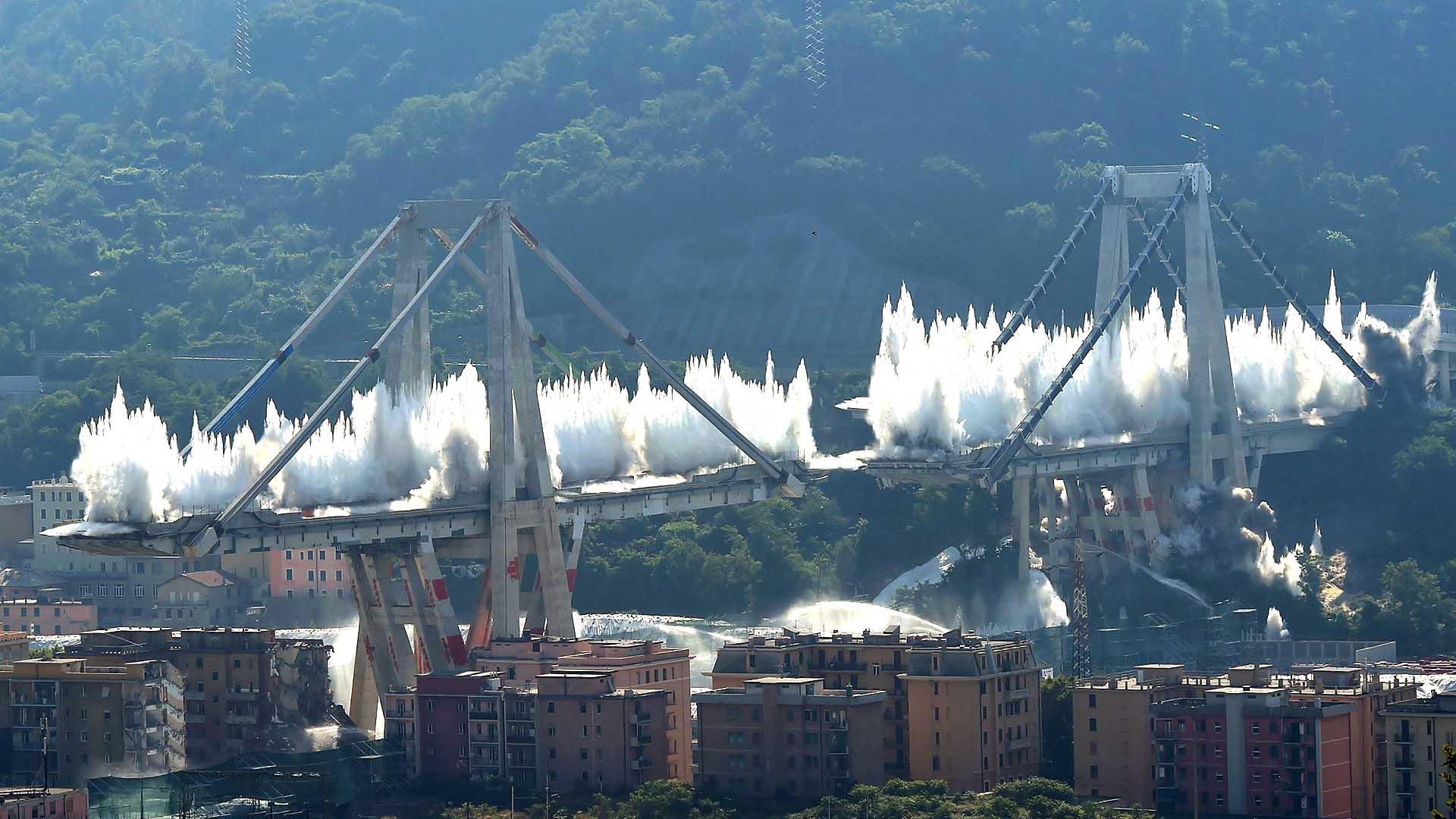 The infamous “Morandi” bridge in Genoa, that collapsed so catastrophically in Genoa a year ago, has now been permanently removed from existence. It has been an interesting process – some parts have been deconstructed carefully, piece by piece, lowering vast concrete bridge sections down via tall mobile cranes… the remaining pieces, like a giant V, are presumably stable enough to remain there on their own. Other parts however, we all know are prone to sudden catastrophic collapse – my animation was still the world’s first, and still beating the official inquiry. Here is a link to my first post on the subject.

The project has been carefully dissected up until now. But when they got to the last part – the remaining viaducts over the valley, there was only one option: time for explosives.

You can see the effect that explosives have on a structure – and the amount of explosives that had to be used, to simultaneously destroy the vast concrete bulk of the bridge. Click here to watch the video.

It’s also quite a noticeable thing, both before the detonation (see pic below of heaps of explosives strapped to the bridge) and also during the explosion of the bridge itself. Not something that you could be unsure about it: this was obviously blown up.

If you’re one of those gormless twits who believes that the CIA secretly blew up the World Trade Centre in 2001 and/or building 7 next door – apparently sneaking in and then cunningly dropping the building without anyone noticing – then have a look at these pics. Thats what a real building demolition looks like…

I couldn’t help but notice, however, the similarity of the explosions to the shapes of the hoar-frost in Alexandra over the weekend. There is a natural pattern of nature’s habit of forming fractals I guess, that has similarities in different media – both delicate ice-forming crystals, and fast-moving shock patterns from plastic explosives.

Its pulling a long bow I guess, but you can’t deny there is an awesome fearful beauty in the demolition pics – that in a happier time might be a series of fountains perhaps, an urban delight in the autostrada, instead of the end of the 1960s in a pile of dust and rubble. Nature repeats its patterns – the escaping line of liquid from a spilled coffee no different from a lava flow from an active volcano. The only difference is scale.

Apparently Renzo Piano has got the job as designer of the replacement bridge – a foregone conclusion perhaps as Renzo’s office is also in Genoa, but the choice may have been influenced by his decision to design it for free – great way to win the commission!

I presume there will be some Engineers who will be doing the bulk of the work – and I hope getting paid for it. But having seen the film on Renzo at the recent Architectural Resene Film Festival, I can see that Renzo is a lovely guy and who wouldn’t want to replace the world’s most catastrophic bridge with a beauty like this?

Although, Renzo, weren’t there people living in housing blocks down there before? What have you done with them? Fields of green and lovely Lombardy poplars – but are the people now living in the trees?

So we can see here from this section – literally a “blueprint” of the bridge design – that the bridge appears to be steel – not concrete like the previous bridge designed by Morandi. There is also a small walkway along the edge, and a wind-deflecting sunscoop on the side of the bridge – which cunningly hides a series of spotlights that will light the underside of the bridge at night. I think I heard this also – that the bridge will have photovoltaic panels on the south-facing side, and will be a net generator of electricity. Did I read that, or just make it up? Can’t find my source!

Apparently one of the reasons that Morandi designed the bridge out of concrete was that Italy couldn’t get enough steel after the war, and so they turned over to concrete for a lot of their infrastructure – infrastructure that is of course now all having to be replaced piece by piece, viaduct by viaduct, and of course the Italian government doesn’t have the money to pay for it. I’ll leave you with one or two last photos – hoar frost or explosion? You decide.