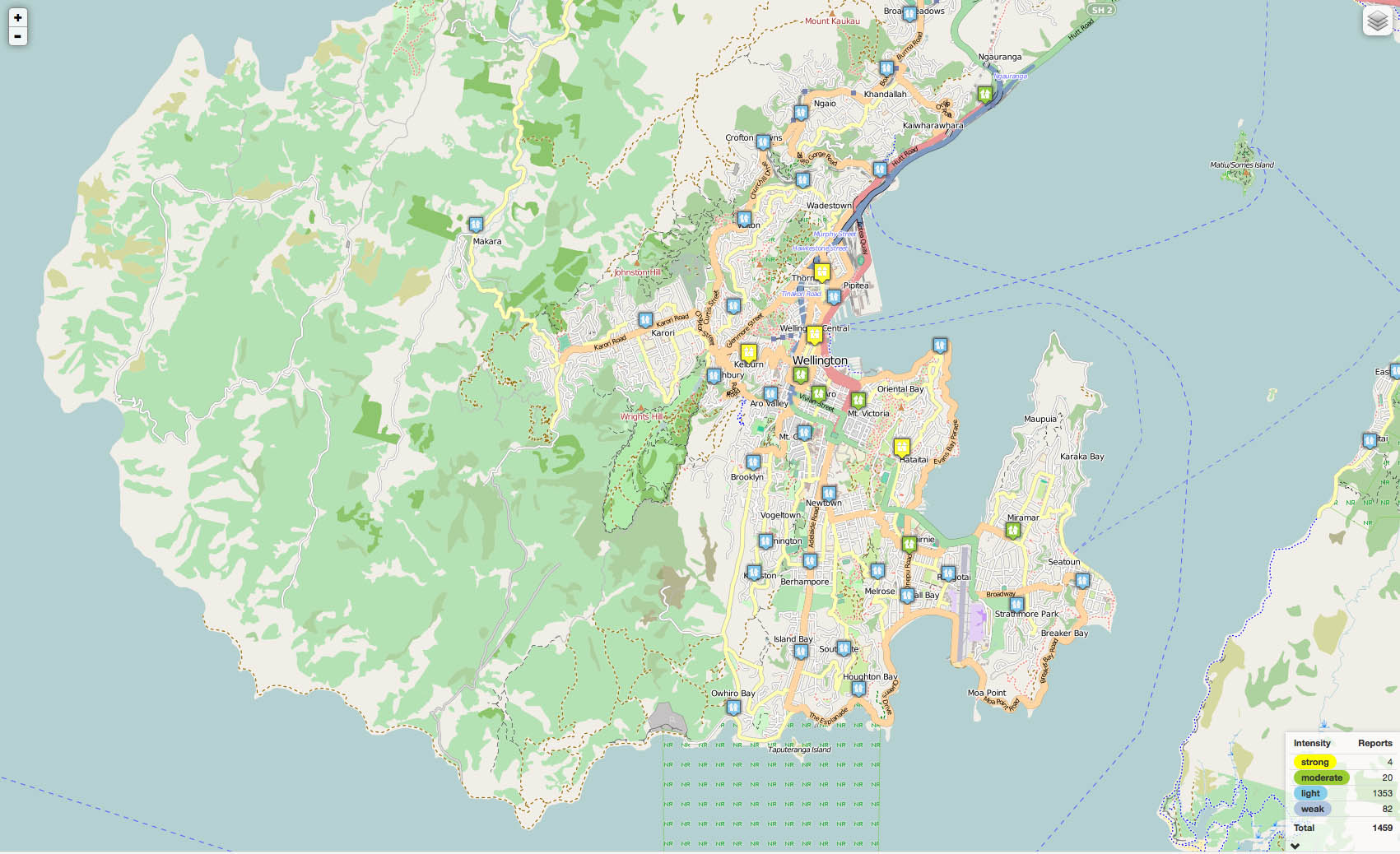 There have been hundreds of earthquakes, if not thousands, in the days following last week’s Seddonator (TM name courtesy of Eye of the Fish, conflation of Seddon and Dominator). A nice little wobbly number just then (11.10am) prompted me to go to the Geonet website and check – it was a 4.9 in the middle of the Cook Strait again – or, as Geonet say, 30km east of Seddon. There’s something big going on down there, even if the one remaining resident of Seddon could only just be bothered to report it in.

What i do love about living in NZ is the camaraderie about all this – the little Fish were all gathered round, excitedly blowing bubbles (not a MJ reference, but hard to avoid it), and we all felt the jelly roll. The good burgers of Wellington evidently leapt to their computers and filed Felt Reports as soon as they could – barely ten minutes later, hundreds of reports had been filed in Wellington.

But there is more to this than meets the eye, or that wobbles the butt-cheeks to be more accurate. We have a slow slip event going on.

Geonet scientist Caroline Little reported in early June that a “Slow-slip” event was taking place, as expected, in 2013:
“To the west of Wellington, the equivalent of a magnitude 7 earthquake is happening right now, 40 km below ground. This would be Wellingtonâ€™s largest earthquake in 150 years, yet nothing is felt at the surface. Even our sensitive earthquake recording instruments hardly notice a thing. This is because, unlike a normal earthquake, these plate movements happen very slowly in a process known as â€œslow-slip eventsâ€. This Kapiti slow-slip event is affecting an area spanning over 100 km from Levin to the Marlborough Sounds. Conventional earthquakes happen when one side of a fault moves past the other suddenly. A similar process occurs with slow slip, except it takes much longer for the fault to move and release energy, this is why slow-slip events are often called silent earthquakes.
GeoNetâ€™s continuously-running GPS instruments in Wellington and Kapiti show that the Pacific and Australian tectonic plates are slipping past each other more rapidly than usual. This has been going on since January of this year, and will most likely continue for several months. These movements represent the equivalent of a magnitude 7 earthquake on the plate boundary, at 40 km depth.”

It’s not clear to me yet whether these events are connected.
Certainly, it is the fast moving earthquakes that affect us more, due to that pesky subducting Pacific Plate. It’s funny that we all accept this explanation so readily now – whereas just a century ago, they still had no idea what caused them. After the 1931 Hawkes Bay quake, one learned gentleman informed people that it was due to the weight of the water in the ocean, breaking the back of the crust beneath. But here is the real culprit: