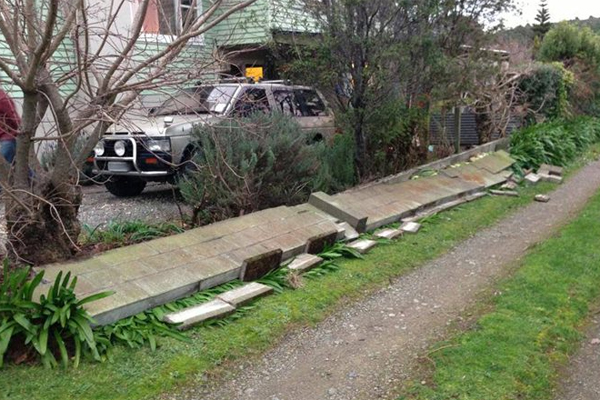 Whilst I am fully aware that was a nasty series of shakes on Sunday evening, and indeed over the last few days, I’m very disappointed in the over-reaction of the media to this seismic event. RadioNZ reported that a building in Featherston St had a collapsed concrete facade – I don’t know about you, but I thought “Crikey! If a concrete facade can collapse, then what about the brick facades in Cuba St!” – and so I set off to find out which building had collapsed. As it turns out, none of them. In another world exclusive Eye of the Fish news flash, I can report to you all that Old Wool House and New Wool House evidently jostled together (I wouldn’t even call it pounding), and some small fragments of plaster edging fell to the street below – primarily because the facade had already cracked years ago, with rusting steel reinforcing visible inside. I’d say that the earthquake didn’t even cause the damage, it was there before – the quake just hastened it to make its way to the ground.

RadioNZ also reported that some asphalt roadways had cracked and areas of paving were being thrown up – again, I don’t believe this was actually true – certainly, having had a thorough scout around town, I could see virtually no sign of damage. I’d say that Katrina Batten, the DJ on air at the time, just made matters worse by saying stupid comments like “if our building is still standing” about the RadioNZ House, when quite clearly not a single high rise building had collapsed – in fact, not a single building of any sort at all appears to have collapsed. Except a fence.

But that’s not to say that we should not be worried. The area that the quakes originate, in the middle of the Cook Strait, is the junction between the two continental plates. We all know that the Pacific Plate and the Australian Plate are attempting to slide past each other, it is one of the reasons that NZ has a strong seismic activity profile. What is perhaps not so well known is that on one island, the Pacific Plate is above the Aussie one, and on the other island, the Aussie is above the Pacific. In other words, the two plates are stuck, binding on each other, and at some stage there will be an almighty great rupture and a bang as the energy disappates and the plates move. And, if I understand correctly, that crossover in the subduction zone occurs pretty much underneath Wellington and in the middle of the Cook Strait. And putting it bluntly, when that goes, we’re all fucked. There must be a more polite term, but right now, I can’t think of one, sorry. So, seeing as we are having a continuous series of bangs and shudders and creaks of evident earth movements from that particular location right on the surface between the two plates, I would have thought would be bringing more cause for alarm. Forget today’s little temblor – the big one is yet to come.

Update: Earthquake Report from Fish Central
Despite the headquarters of the Eye of the Fish being composed of many piles of important documents, and so hence apparently in an earthquake-prone, ready to slide formation, all that fell over was one birthday card, tragically toppled to the ground, one emergency transistor radio also toppled – the cause of the one incident above, and a small plastic figurine of Bender, who is inherently unstable anyhow (due to alcohol and bendy legs). Oooh, and a bottle of wine lying on its side, but i can’t guarantee that was not due to other causes. Yes, I know, Wellington got off lightly – but we SHOULD be at a state where we can ride out a Quake with no more damage than that.