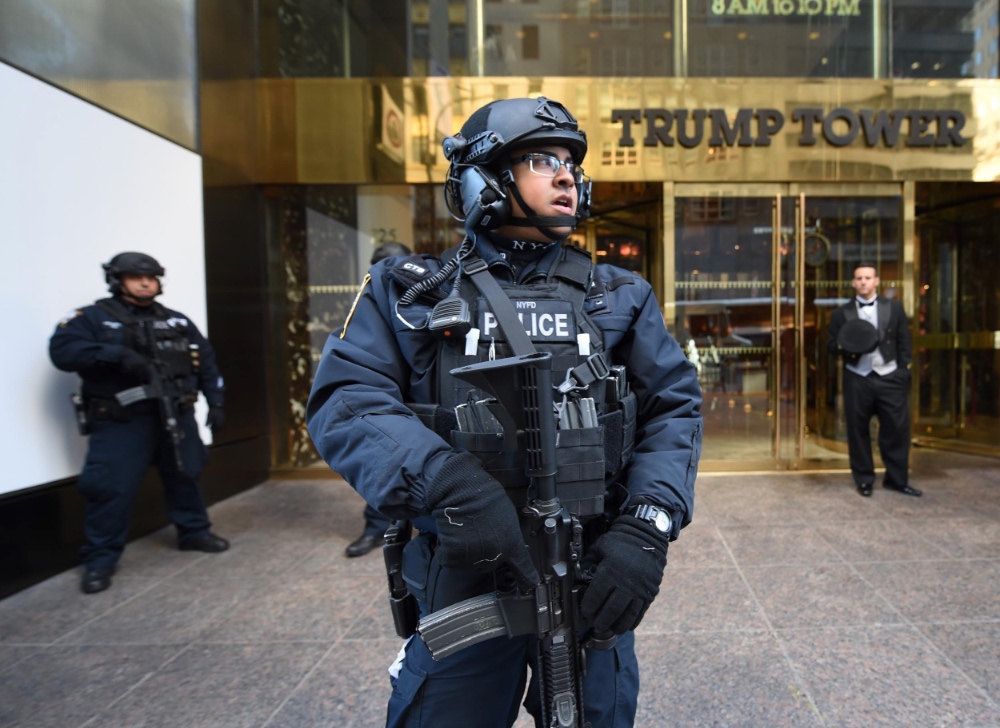 Like, I suspect, most of you reading this, I am a mixture of appalled and very glad – appalled that the Americans elected a complete narcissistic dickhead to the position of the President, and very glad that I am over here in a land very far away from him and his hired bunch of expensive illiterate thugs. I’m most impressed by the massive crowd of women who marched against him the next day. Too late to do anything, but still, it’s nice to see that not all of their country has gone mad.

But this is a blog about architecture and urbanism and as such, political commentary is not really my bag – apart from spitting invective. Feel free to spit and rant below in the comments.

So, perhaps it is better to look at the architecture of the little egotist, and the results of his tiny hands. As befits all men with inferiority complexes, he decided to build a big tower to bear his name, and as per all would be kings, he wanted everything to be gold. His penthouse apartment, of course, is incredibly tasteless by almost any method of judgement (more on that later…), yet the actual tower is intriguing and very clever. I’ve been there a couple of times and never cease to be amazed. But then again, just like his presidency, it is all smoke and mirrors. Well, certainly lots of mirrors. Mirrors, more mirrors, and even more mirrors.

The design, by Der Scutt (Donald Scutt, of Poor, Swanke, Hayden and Connell) in 1983 is on a corner – all good developers known to buy up the corner lots and build there – you get two frontages, and views that can’t get built out. What’s better than a corner with one corner I hear you ask? Why, more corners! Corners with mirrors! Mirrors on more corners! And the architects have certainly excelled themselves. Although the upper floors are effectively taking up only half the building plot, the zig-zag nature of the corner means that every apartment inside the building gets a corner, and no doubt rents are high. Sky high. And no doubt, he doesn’t pay rent on his own apartment himself, and no doubt that penthouse apartment is at the very top, the bell-end of the giant penile sculpture that is the Tower. No wonder he doesn’t want to leave and go and live in an ordinary, two-storied, white painted house in the suburbs of a city where only 4% of the population voted for him.

Anyway, so, yes, the Tower is a thing, and is a very clever thing from the outside. Inside, however, it is another story. I actually really really like the inside, as, like its namesake, it fucks with your head and is very surprising, doing tricks that the rest of the world is continuously amazed by. I can’t find a ground floor plan for it, and so a section may have to do instead – which shows you that the atrium is actually at the back end of the building, not in the area under the front as I had thought it might be. Of course, being the man that he is, everything about the Tower reeks of lies and misinformation as well as outwardly opulent flatulence.

There’s 58 upper floors, but he says that there are 68 stories, so his apartment is on the 68th floor. That’s because the atrium, which is variously described as 5 stories high or 6 stories high, apparently takes up the space of 10 stories, so, you know, whatever, make up some bullshit and spin the story hard enough and people will report it as truth. Works for some people! Who knows where it will get you – maybe even head of your own country! How about some cold, hard facts then: the building is 202m tall to the top of the roof. The building has 28 sides, due to all the corners. The flagship store on the ground floor is Gucci.

The atrium is Halloween for the eyes though – both a Trick and a Treat. It is a complex space, with a tall (18m) waterfall cascading down the rear wall, over rose pink “Breccia Pernice” white-veined marble, and up-lit by many bright shiny spotlights. This is no moss-covered, damp, soggy waterfall, but instead a cascade of glitteriness and golden showers, with relatively little water actually reaching the bottom – a perfect failed example of the Trickle-down effect.

You get up the atrium by using the escalators, which weave you up from floor to floor and eventually you reach the top, only to weave your way back down again. Along the way, you realise that the atrium is not actually all that big, and that the other waterfall and other bank of escalators is in fact the same one you were on, just reflected in giant gold-tinted mirrors. In fact, not only is the outside mirrored, but the inside is as well, meaning that there is not actually that much rose pink marble but actually just lots of gold-tinted mirrors. Not real gold, of course, just a cheaper imitation in brass, but the look is mesmerising, and you end up like a deer in the headlights, gradually voting for the man whose name is plastered everywhere.

It’s confusing. It’s very clever. Der Scutt was a clever architect. The upper floors are, well, who can even remember the upper floors. The shops are, or were when I was there, mostly empty, or filled with tasteless tat. It is a public space, for which he no doubt got a tax rebate, or a free wife, or some other such bauble to stash away with his other ill-gotten gains. You know he is famous for not actually paying the bills from his architects, right? Much the same as other scoundrel developers we have (or had) in our own town, with the Greek guy being the most prominent, but others do it too. That’s how you make money – by screwing over the workers – something that the proletariat (i.e. most of America) need to learn. Find your barrel and be prepared to bend over.

The building was built on the site of a previously well-regarded Art Deco building for Bonwit Teller, and the proposed solution was to remove intact the previous buildings limestone bas-relief sculptures of semi-nude goddesses, as well as the large ornate entry grille at the store, and donate them to the Museum of Modern Art. Instead, the owner of the development ordered them to be smashed up and destroyed, much like he will do to ideas of democracy and decency in the country he now heads.

Meanwhile, try and tell me where the space starts and ends, and where the walls begin. Are you looking in a mirror, reflecting yourself, or is that another handsome fish over there, waving back at you? Oooh, shiny shiny shiny!

Not that you or I could ever get into the actual Tower of course, but if you do, at the very top is a tasteful, well-appointed, sensitively scaled apartment for a demure man. Such taste!

The living room just simply EXUDES class from every gilt-edged molecule of its fabric. Just to prove that it is not all gold, there is even a square of white carpet, just to prove how tasteful this is.

And lastly, just to really make your day, and perhaps to explain why the first action in the white house was not to sign a bill to repeal Obamacare, but to replace the maroon curtains with gold, because, as you know, gold is just so much more tasteful. Enjoy. Better bring a bucket….