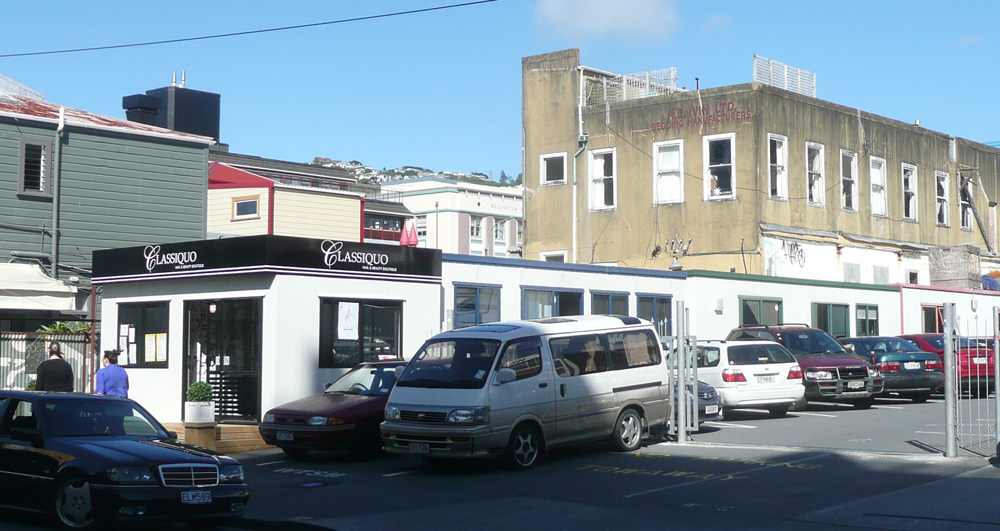 On a day like today, with the wind blowing to the Max, it seems that the best answer has won: Wellywood has been blown away, by, well, Wellington – Blown Away. While I had a personal liking for the idea of the Eye of the Taniwha, seeing as Braddock is drawing off a similar theme to our little website, if there is one thing people know about Wellington is that it is windy. Scant comfort to those landing in a 737 in a strong southerly, but at least you’ll be able to look out the window and see exactly where you are.

We’ve also got an election coming up, but no one seems to be talking about that, all the media wants to discuss is two Johns tea-bagging each other in a public dunny. Or some such bullshit. No, Lindsay, you’re not going to get a visual illustration of that. Yes, Robyn, you’re right – I didn’t want that visual either, but like a Kate Perry earworm, once it gets into your head, you can’t get it out without some solid scrubbing. So: let’s talk about buildings instead. After all, that’s what we’re really here for.

Recently, while we were talking about the curious case of the Demolition Order placed on the little green Dry Cleaners in Cuba St, I took a visit up to Cuba (St) to take a photo and found something rather odd.

Here’s the 55 ‘Min’ dryclean parlour, abandoned to its fate. White knight unlikely to be coming to the rescue, I would have thought. This is one piece of urban architecture certainly not worth saving. Ironically, it looks like it may be the only piece in the neighbourhood to survive a quake, seeing as its green colour scheme is so powerful, and all the neighbours look like they are made from antique cardboard. Musing on that, I sat down at Fidel’s and had a plate of eggs: ordering politely, not Jake Heke style. We’ve all been to Fidel’s Cafe in Cuba St. It’s the secret place that everyone knows about, with the hideaway area “outdoor” area disguised as a Cuban duck-shooting maimai, and the more in-you-face outdoor area out the front – unfortunately full of the last of the dying breed of smokers. Cough cough, hack hack, you’re polluting my lungs. I love the fact that ever since the Super-Cuts barbershop disappeared and hung up its scissors some, oooh, 5 or so years ago, and Fidel’s moved in, that the signage of Super Cuts just stayed the same – the Fidel’s sign is small and discrete by comparison. Every possible imagery of the world’s (almost) last Communist dictator smile down upon diners, cigar gleaming and khakis crinkling as we dream of a Havana perpetually bathed in sunshine.

Coupled with the lovable buxom and heavily tattooed waiting staff, its no wonder that there is always a queue of people waiting for food and drink at the tiny opening that serves as a counter, in between straining mountains of humungous muffins, and the great racks on display (of pasta salads and hearty filled rolls) make me salivate every time in perfectly timed Pavlovian response. On paper, this is the sort of design that just shouldn’t work, with that narrow corridor full of people, and wait staff squeezing past with plates full of wobbly eggs and boiling hot coffee, complete with inappropriately placed steps for extra trip potential – but somehow, in that squeezed-in, grungy, pseudo-revolutionary place, Fidel’s manage to pump out consistently good fine food and cheerful service. Fidel’s then is the epitome of everything that Cuba St has come to be: counter-culture, slightly downmarket, and yet at the same time beguilingly inviting, curiously quizzical and yet highly sophisticated in a grungey kind of way. Fidel’s is, of course, Uber-cool in a way that only Cuba St can do.

The curious thing about the green building next door therefore, apart from the mere existence of such curious greenness, is that it now houses a Nail salon called Bella. Yes indeed, Nails: Not Brads, or Clout-heads, or even Bright, but just some colouring stuff for those boring bits of growth at the ends of our fingers.

To me, a nail salon is an exceptionally uncool business, performing unnecessary pedicuring on image-obsessed women with fake tans and artificially blonded hair extensions. A nail salon surely belongs in the outermost depths of the suburbs, along with the mindset of the people that live there. I dunno about you, but nail salons just seem so much a complete waste of time. Like macaque monkeys grooming for nits, hair salons and nail salons seem to cater for those with the most vapid time to spare, and such an unlikely addition to Cuba Street’s carefully cultivated bohemian background.

Imagine my surprise then, when I discovered that Fidel’s had sprouted not just one, but two nearby Nail boutiques. The second one, classily named Classiquo, is even more of an abomination, not only housing a banal business but also being housed in quite perhaps the most ugly and uninspiring building in Cuba St. There have been a number of portacabins parked in the corner of the Fish Market trawling site for a number of months/years now, but this latest addition has suddenly turned into a retail outlet, offering services to bored socialites with cuticle calamities. The building is so banal and so ugly that I can only presume that it is a temporary production, because surely our Urban Design crew at the Council would never have let such a monstrosity be permitted – or is this just a foretaste of things to come?

Is the fact that our buildings are getting red-stickered in anticipation of things to come? Will we pull down the heritage of Cuba St to be safe, and allow us to rival Christchurch for architectural blandness, whilst simultaneously building rubbish boring banality such as this?