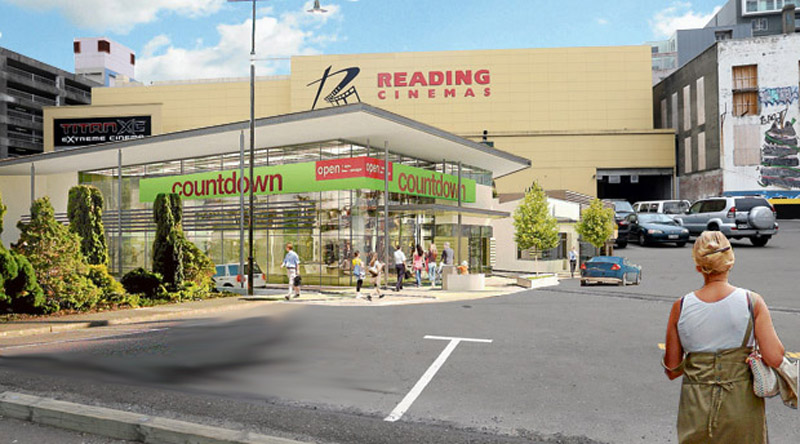 Just what we need – another supermarket. No doubt that is the cry echoing around the hills and valleys of Wellington, as we are faced with the news of yet another supermarket being foisted on our city, in the name of “competition”. Yes, the long empty site behind the increasingly dog-eared Reading cinema (which I like to think of as the “Cinema of Unease” due to their awkwardly uncomfortable seating) is apparently proposed as the landing strip for a Countdown supermarket. That’s right – the high-profile site directly opposite Te Papa, our nation’s finest civic building (don’t laugh), is to have a large shed plonked on it.

Something doesn’t quite seem right to me there. Yes, I know it is then in prime position to counter the central city stranglehold by the Chaffers New World, but is anyone really crying out for this? Isn’t there already one just gone up in Newtown? And isn’t there another supermarket being planned for the Basin Reserve? (Not planned for right in the middle, but may as well be, now that the Basin is to be fucked over by a bridge across it). Does anyone really think that we need this particular Countdown right here on the waterfront? Is there not a better use of of our scarce waterfront land for something that people actually want?

What people DO seem to want, is a fantastic market, not a supermarket. Just over the road and down a bit, is the phenomenally successful Chaffers / Waitangi Park Sunday market, which has just been bustling like a mad thing this summer. Masses and masses of happy shopping people, buying fresh fruit and veges and having a good old time trying some top notch ethniccy foods, communing with the ducks in the former graving dock – its just a lovely, joy filled experience, and a great setting, next to the park and the sea. Wraight Athfield’s design for the Waitangi Park has proved to be a fantastic ly flexible winning space for Wellingtonians, and the boring carpark site springs to life once a week. But I hear no one clamouring for another supermarket, right on our front doorstep.
Postscript: Fantastically rendered scheme attached as image. My photoshop skills are improving! (subject to debate…)