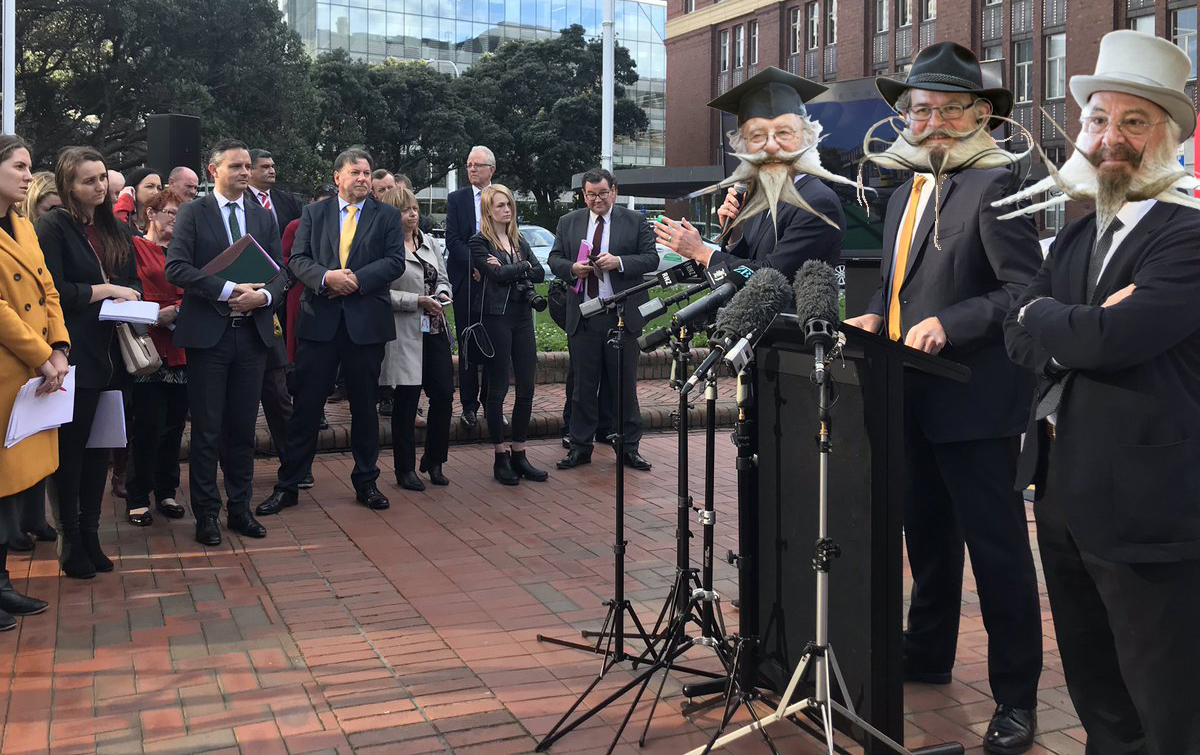 More and more people have come out of the woodwork at the last moment, and Scoop has a full list of candidates for Wellington. Here are some who are angling for the top job:

I’m not sure why, but my first thought was to stage a caption competition, between two fairly stodgy candidates – for the Hutt – not for the capital. Chris Bishop is looking with faint homoerotic loving at his local Mayor Ray Wallace, or perhaps he has decided to nick the Mayoral chains and give them to his girlfriend in a sort of West-side manner. If you’re switched on you’ll know what I mean. Entries welcome below please…

And for other, completely unknown reasons, I felt that a previous photo needed more beards. So here you are: hair. Hear Hear !

But of course the bigger news from yesterday was that Andy Foster has decided to stand, with the backing of the chief hobbit himself. Despite Councillor Foster being a relatively frequent visitor to this site, I didn’t get an invite to the launch – so I went along anyway, but arrived after the speeches were over. Interestingly, much of the crowd were from Weta, many were also from an “I Love Shelly Bay” campaign, and Andy Foster was looking very smart in a new suit.

Will the combination of the two hobbits (one more like Smeagol, the other more like Bofur), prove to be the killer combination? Certainly it has thrown a cat amongst the kereru – the big deciding factor for me here is: can Foster actually live up to his promise to actually get something done in the city? If so, then: big thumbs up! Let’s see some of the words around two of the issues that are close to the heart of the Fish:

â€œI will make decisions over the next year so construction can get underway alongside Town Hall strengthening. With the School of Music, a solution to the Central Library, activating the edges of the Square with cafes, the return of Council and possibly other activities Civic Square will be properly Te Ngakau â€“ the heart of our city.â€

â€œLetâ€™s Get Wellington Moving is politically compromised, looks to be ineffective, overpriced and slow in delivery. Roads appear to have been deemed evil. Iâ€™ll push for an integrated transport system, more people walking, cycling and using public transport, and decent roading connections sooner rather than later. Public transport has become a real problem. The one practical thing the City Council can do is deliver bus priority which successive City Councils have refused to do. I also want the Airport Flyer resurrected. Given the desire to spend billions of dollars on future mass transit, it would be irrational not to fix the existing bus service for just a few dollars to give some benefits now.â€

Hmmmmm. “politically compromised, …ineffective, overpriced and slow in delivery.” Agreed with that. But is that a vote for LR or for BRT or TTS ? Care to comment Andy?

Oh – and while I’m at the keyboard, I thought I’d spice up the election pic for you. There. Better?