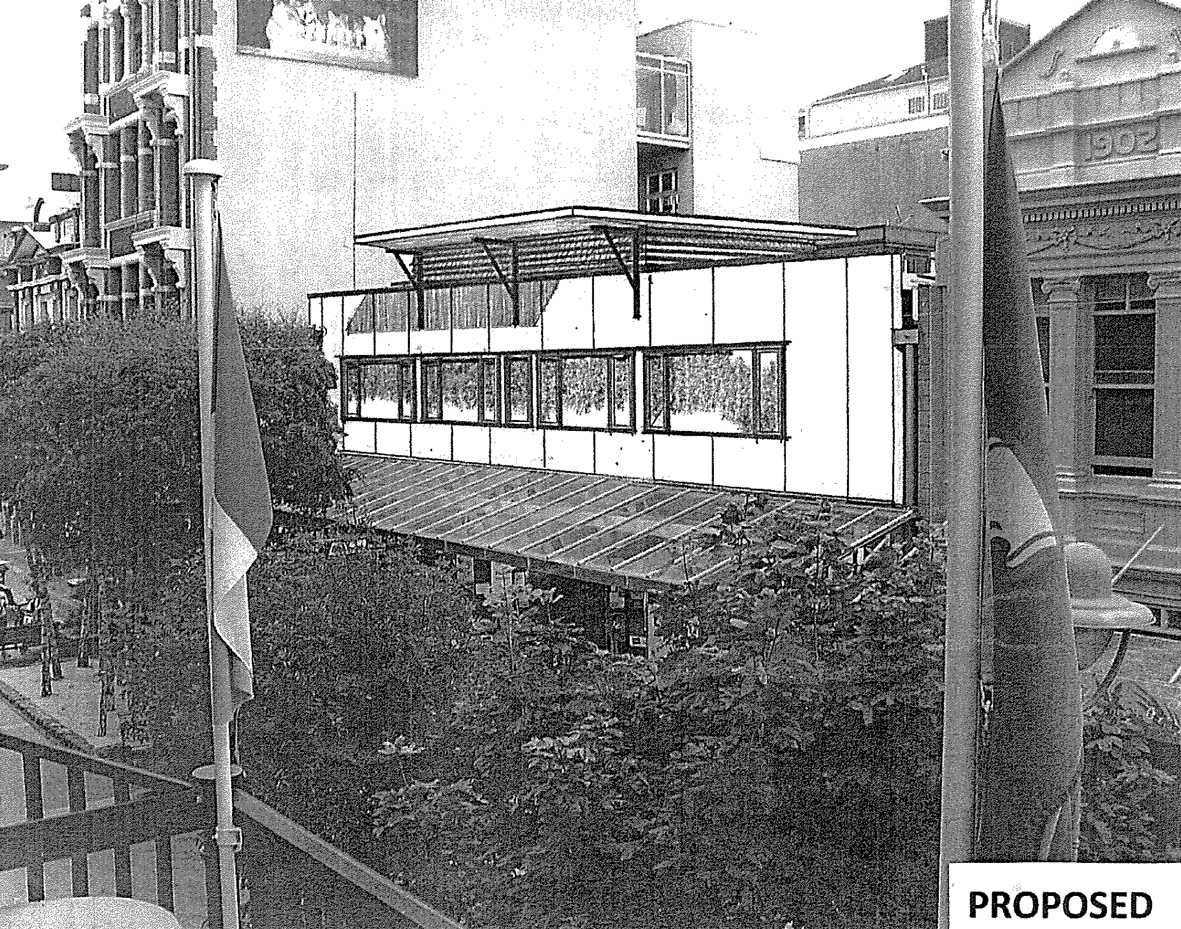 There’s an old saying that you should never work with animals or children, and it’s been proved many times: witness countless Hollywood films like Kindergarten Cop and Daddy Daycare. Cujo. Critters. Lassie.
Woof, woof: barking mad.
I rest my case.

There’s another saying too, that goes something like – you should never publicly declare your love for something or else someone will promptly take it away from you. It is like when you were at primary school and had a crush on the cute red-headed kid in the next row, who promptly went off with someone else in 4F and flaunted their relationship at you. Or like Manners Mall, which nobody ever said they loved, and now its going to become a bus-lane instead (comments close on Friday – get your feedback in to Council now). Only here, if it is a building, they’ll just go off and demolish it out of spite, as I discovered recently when I went in to Council to check something out, and found this instead:

No sooner, it seems, than I had declared that my all time favourite Wellington building of the 1980s was this Polychromatic Block building by Stuart Gardyne, the Cutie of Cuba St (the building, not the Stuart: do keep up!), than this happens: a developer rolls into town, pistols drawn, clutching a Resource Consent, arms braced ready for a fight.

“We’re going to take this here building and rip it to shreds in front of your very eyes…” he drawls, spitting spittily into a spittoon. “We’re going to rip off that quirky little face you like so much, and leave it looking reeeeeaal ugly.”
( Note: imaginary, paraphrased conversation, not a depiction of actual conversation at all… )

So ugly, in fact, that the architect involved (yes, architect, not just some rogue western draftee) was originally proposing some fibre-cement boards plonked over the top, and some steel brackets screwed through the front, in a parody of a classic Western style shack, but without the grace of a John Wayne or a Clint Eastwood to carry the day. The brackets carry a flat cap, surrounded by louvres, the dullest of dull details. Even McDonalds are pulling it off better these days, louvering their McCafe facades. It’s the sort of thing that looks bad enough in the suburbs, but looks even worse in the city: a dull, blank slash of windows, brutally piercing a flat, formless facade that has lost any semblance of the certain joie de vivre that so permeates the original. I really am dreadfully disappointed: if this happens, then truly the only good thing left from the 80s will be my old Cure records.

Its a curious conundrum: the original building, by Gardyne when he was at Structon, is a witty, colourful homage to the 1930s, utilising ordinary materials such as concrete blockwork to create a product that is quirky, amusing, and stands proud in the street. Yes, it is a piece of Post Modernism, but a rather good one in a sly little way, without heavy, overt references to the past. Yes, I can see that there is a small segment of lost revenue space, but the shops gain a cozy entry, and I still shop there regularly at the chemist. I pick up my weekly copy of the Capital Times from beside the non-lit lighting post. The ex-Mayor lives next door, the tables at the Bristol are always full of the same people (that old bloke with the beard – does he live there, or what?): its a colourful part of town.

The design above, which at first I assumed was a joke when I discovered this application at the Council, is so bad that it is laughable: although sadly, it was deadly serious. Lacking in grace, at least it contains honesty: Developer-Modern, Builder-Shed Hardies-Sheet style, if we could coin a current phrase for it. It’s ugly and it knows it: it’s not trying to be anything else.

And then along comes this, the Remix:

I’m really not sure whether I should laugh or should I cry: the design is now harking back a good century or two, no longer Developer-Modern, instead it is now a sort of pop-top caravan for the Medici family. It’s less ugly, to be sure, but now just seems false and hollow. Is it real or is it Memorex? The pilasters look a wee bit ‘olde’ but lack rhyme or reason. The capitals, if we can call them that, are a less than slick parody of a retro classical facade. Do I see a reference to the Temple at Karnak, or am I reading too much into it? I suspect so: this one is just as bad as the first. I’m sure there will be another version to come. Let’s hope that whatever is left of the Urban Design team at the Council has the ability to say a big fat NO. Although no longer a Gunfight at the OK Corral, it is still a Calamity in Deadwood, and as such, deserves to be railroaded out of town.