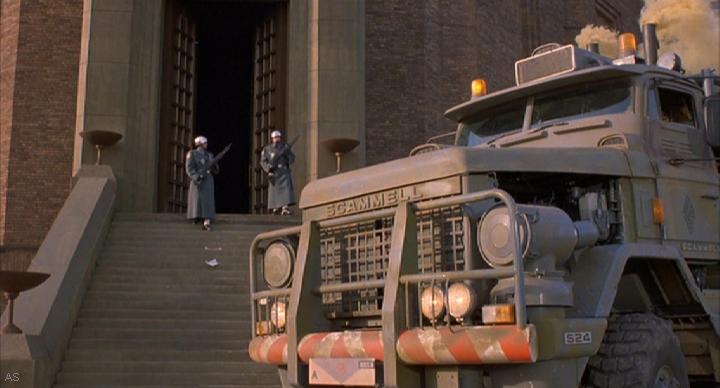 Slightly off topic to discussion of Wellington buildings, but just a quick note to say that the wonderful Film Archive in Wellington is showing the film Brazil for the next few days – until Saturday. Thanks be to Frank Stark and Steve Russell. Note to the curious: does not contain anything about Brazil or Brazilians.

Quite possibly the best film ever for architects, and definitely one of the few films ever to feature the work of Services Engineers so prominently, Brazil is a MUST SEE for any of those of you young enough to have never seen it. And if you’ve only ever seen it on video, then now is the time to see it on the big screen.

Curiously, the film was a bit of a dud on release – but predictably that was just because the suits couldn’t get to grips with its weirdness. The other great architectural cinematic masterpiece, of Blade Runner, was also a dud at release, but has gone on to become on of the all time favourites with architects, and film buffs, every time they run a poll.

updated: With added picture just for 60mPa, who still goes weak at the knees for short tough blonde women delivering concrete in his dreams…. of Kim Greist, the ‘truck driver’ of the Scammell, and then another pic of Jonathon Pryce forcing her to drive with a fearsome weapon….

I include for you here a great synopsis of the movie off a little know blog called Monkey, who put it into words better than I can:

“Set somewhere in the 20th. Century in a giant, unnamed metropolis where the grey suits and paperwork flows like blood through the clogged veins of an eventual heart-attack victim, the story follows a little man named Sam Lowry (Jonathan Pryce), a low-level government employee who is conflicted about his role in an overreaching bureaucracy. We learn that he is initially happy with his “dead end job” and simple life, and that he habitually escapes into a fantasy world of romantic struggles. His contented but lonely life becomes complicated by his mother’s attempts to secure him a promotion, the intrusion of a renegade heating engineer, and the real-life appearance of the woman of his dreams..

Throughout the story Sam becomes involved in complicated and life-threatening attempts to secure himself happiness, while also developing a strong hatred for the system of which he is a part. Ultimately, his efforts culminate into a violent and tragic climax, the outcome of which depends entirely on his friends’ loyalty to Sam over their loyalty to the system that controls them..

Featured in this story is (in my humble opinion) one of the greatest characters in film history: Archibald ‘Harry’ Tuttle (played by Robert De Niro).. His philosophy on life is what i wish i was living right now:

“I came into this game for the action, the excitement. Go anywhere, travel light, get in, get out, wherever there’s trouble, a man alone. Now they got the whole country sectioned off, you can’t make a move without a form. this old system of yours could be on fire and I couldn’t even turn on the kitchen tap without filling out a 27b/6… Bloody paperwork..