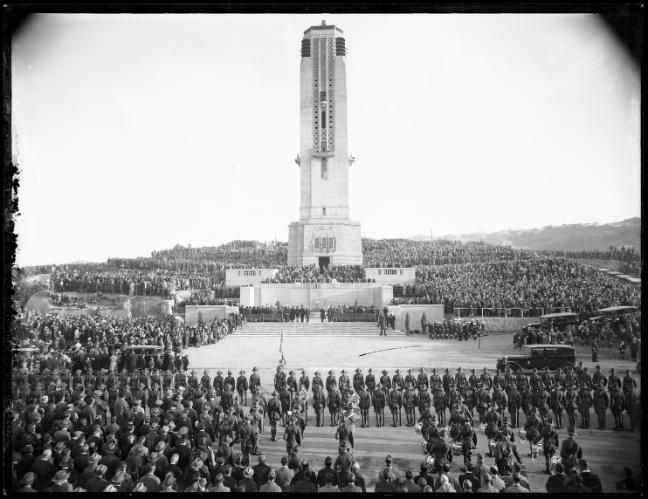 Having attended the ANZAC service this morning, like so many New Zealanders across our country, I came to realise how inadequate our present War Memorial is. For a start, there is hardly any room for visitors, who have to cling to the hill side and peer through the trees.

On it’s inauguration many years ago, the Carillon stood alone, proud and prominent on the base of the hillock we call Mount Cook. The crowds numbered in their tens-of-thousands. The site had previously been a site for brickworks, a jail, barracks, and more: but it was selected for its prominence over the city. Apparently, when the jail stood there, it watched broodingly over city, casting a baleful glance at the sailing boats anchored in the harbour. No doubt, in a similar manner, it was hoped that the Carillon would also be a prominent presence. A broad boulevard was planned to extend out from its base, reaching down towards the sea.

However, due to the current insensitive state highway cutting across its foot, and due also to the seeming absense of any recognition in the District Plan, the view from the Carillon and the War Memorial behind it is very much less than inviting. At either side of the Memorial is a mass of seemingly ‘sacred’ pohutukawa trees, ill-affording the public anywhere to sit in peace. Immediately at the foot of the steps is the wide asphalt swathe of the multi-laned state highway, full of incessantly roaring traffic, except for a few hours break on this one morning each year. Just beyond that is the still-cordoned off disaster zone that is the proposed site for the Memorial Park, that seems to have been still-borne between Clark and Key governments. In the mid distance is a bland, mish-mash of second rate apartment buildings, only the curvilinear skyline of the Walker / Serepisos Century City standing out from the rabble.

The sea is no longer visible. The hills are barely peeking out from above the buildings of the city. We seem to dishonour our war memorial with apparent impunity.

I’m sure we can do better.

There are a number of things we can do. First up, the excellent recent news (but still unconfirmed) that SH1 may be trenched to go past the War Memorial, so permitting the traffic to flow smoothly, and the peaceful and respectful nature of the Memorial to be observed. Handily, it fits in perfectly with the contours of the site, so we look forward to that being confirmed.

Secondly, those ‘sacred’ trees each side of the steps – really, they’re a bit of a nuisance, and some need to be removed. Forthwith. There is nowhere to stand, sit, or even observe.

Thirdly, that swathe of asphalt and silly fencing that stands in front now, desperately needs to be made into a park. There was a competition once – who won it? I never saw an announcement. Whatever – whoever – something needs to be started on that now.

Fourthly, but by no means the least, the District Plan view-shafts around the Carillon and War Memorial need revising. They seem nonsensical. For a start, you can’t see through the trees, but secondly, the prospect of buildings rising 10 stories in the air directly in front of the Memorial seems so wrong. Height limits from the steps of the Memorial all the way down to the sea need to be revised so that more towers don’t block off the vista. Not sure that there would be anything worse than saving the immediate vicinity of the Memorial for a Park, only to block it all off with an eyesore after all that.