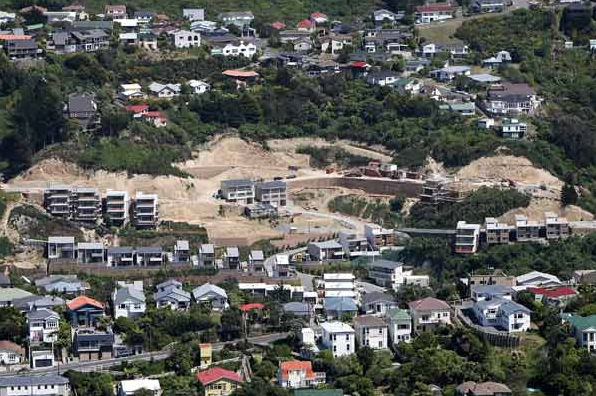 This week has been a notably anti-developer week, a nasty bump in the world of property development. Not for quite some time have property developers and property financiers been held up for so much scorn, hatred, and public derision. Is it all deserved? You be the judge.

Firstly, local property developer Lance James has been sent to jail for 2 years – yes, TWO years, although not for heinous property development crimes, but instead because of lack of payment of tax. Ouch. That’s got to hurt. But not as much as eight years would… It also seems a grossly unfair penalty for a relatively small amount of tax – I’m sure his lawyers will be appealing the decision, and yet, there are other activities that could be alleged are more worthy of jail. How about despoilation of Brooklyn’s Ohiro Rd gully for a start? James had, for many years, openly flouted Resource Consent requirements, shifting vast amount of earth around the gully, causing massive scars on the landscape, and turning a development which he had permission for very few houses, into one for very many houses. Consent was applied for retrospectively, when it was too late really for the Council to argue the toss. The buildings themselves are not too bad, but the way they were procured has been unbelievably shonky. Suppliers, contractors, and presumably architects too have all been left severely out of pocket. Some unfinished houses have had to be demolished, as they had already started to rot. Unusually for the Dom Post, there’s a whole page of actual really good journalism on the subject in the Saturday edition.

Secondly, last week’s paper shows how a local woman, and one time Chocolate Fisher, Janice Johansson, has also been jailed, for ripping off everyone in sight, including the public, by spending money that wasn’t hers, and erecting ugly developments in Scorching Bay. There was also the suicide of local eccentric Adrianus Johanus Vlug, the compulsive tiler of the Chocolate Fish carpark, whose murals still decorate the now very much less successful Scorch-O-Rama cafe in the place of the much loved Fish. There is obviously more to this story than the paper let on, that relates to the demise of both Vlug and of the Fish, but a polite veil has been drawn over the depths of the wranglings. The web was so tangled that I couldn’t really follow what she had done, except for stuffing up the local local property market by paying too much for a decrepit old house on a seaside property. But: spending money that wasn’t hers – that’s just standard practice for property developers isn’t it? Although, of course, in her case, she could have asked first – in her case, it was outright theft.

Thirdly, North and South magazine came out with a massively long and well researched report on Hanover Finance, and the crooks that run the companies there. Mark Hotchin in particular, should be going to jail for a very long time, perhaps for ever, yet I’ll guarantee that he will get away scott-free. The article, several pages long, details at length the many varied twists and turns that Hanover Group went through, continually ripping off investors, and of course squirreling away money for themselves. Go out and buy a copy for yourself: the extent of deceit of the financiers and property developers is staggering. Curiously, North and South has absolutely no on-line presence, so I can’t link to them, but I’m impressed: perhaps N&S will struggle on a bit longer, while its one-time big sister Metro magazine seemingly takes a deep dive down to oblivion.

Nationwide there are other anti-developer rumblings. Some massive developments in Queenstown, including Dave Henderson’s Five Mile project, and Nigel McKenna’s Melview Development Kawarau Falls, have gone under, leaving massive holes in the ground as well as massive holes in the economy. Local builders there are hurting, and bleeding to financial death. Overseas banker troubles caused by the credit crunch have finished these schemes off, but were they ever really that feasible? Henderson’s hole in the ground never got any further – it is still just a hole, without any structure in it, but Melview’s hole is largely full of incomplete buildings. Will they too, like the unfinished dwellings in Brooklyn Rise, have to be demolished? The lesson to be learned here would seem to be: keep the infrastructure costs low, and complete project phases before moving on to the next stage.

But the unveiling of dodgy dealings within the finance industry in NZ (now almost totally dead) and the associated even more dodgy dealings within the property market, has surely dealt a virtual death-blow to the property finance world in NZ. Why anyone would ever trust a property developer or a finance company ever again is beyond me. Playing Monopoly with friends over Easter, I was reminded how true to life it really can be. Members of our group were happy to finance themselves into oblivion, out-spending on development of tiny hotels on uneconomic sites, while the banker sat on a steadily growing pile. The meek investors just got royally screwed, went bust, and went to bed, exhausted, in a huff. As always, if you were a high flier with lots invested in property and little ready cash, the best place for you was to:
Go directly to Jail.
Do Not Pass Go.
Do Not Collect $200 million.