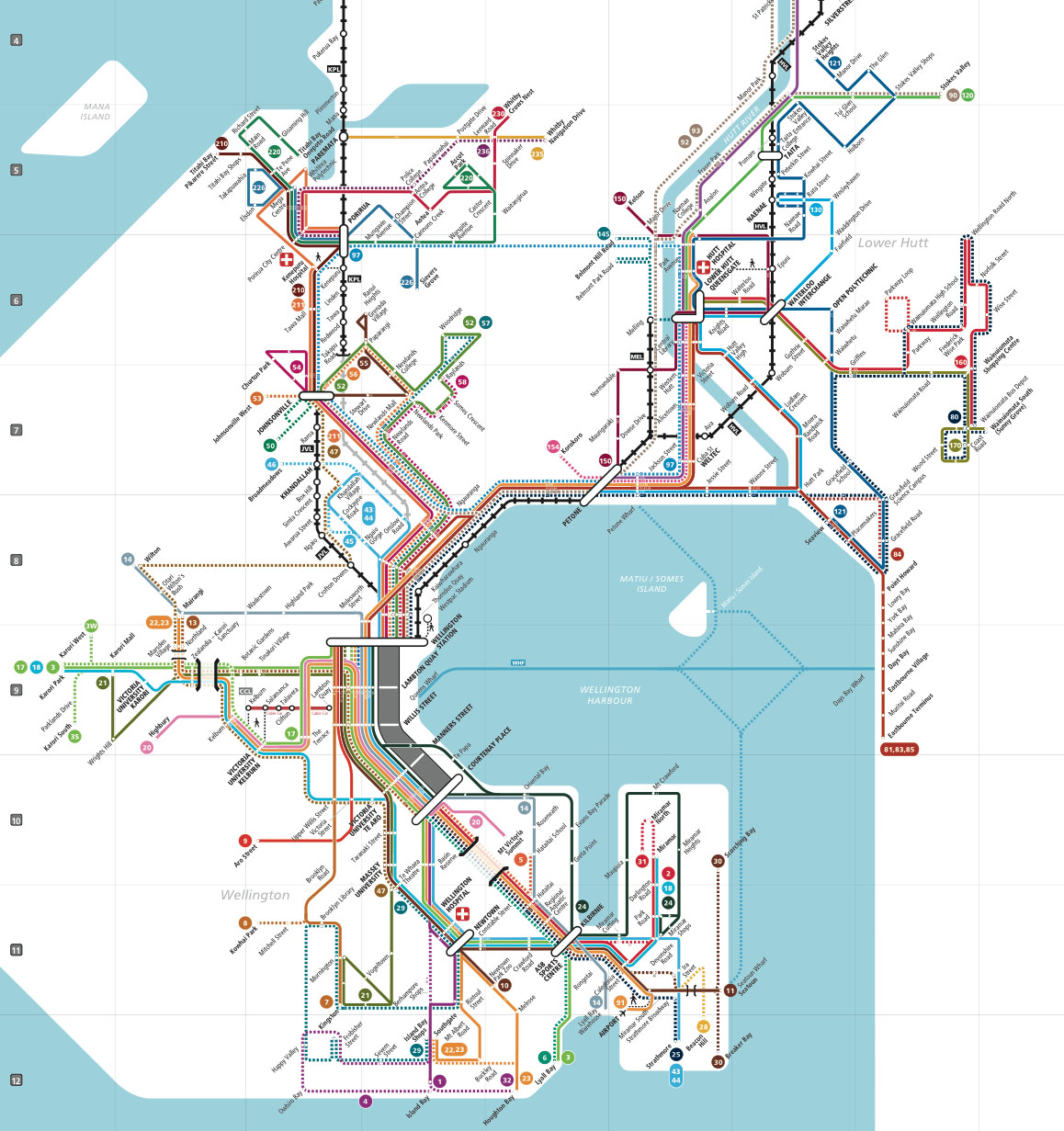 One week to go – one week till the entire Wellington Bus system is completely revamped. I’ve been following what has been happening in Auckland with their AT bus revamp, and it must be a national thing, as Dunedin is also planning a similar revamp – and of course Wellington is rolling it out too.

It seeeeeems to be working in Auckland, but then their system was a lot more complex than ours. We have a curious system, with all our trains working well but stopping disastrously short, on the very edge of town. The bit where most of Wellington lives, ie Central, East, South, and most of West, have no trains at all, only cars, bikes or buses. You can see it clearly on the map here, with the great fat wide bar (denoting interchange) at the north end of Lambton Quay.

Curiously, when I do a google image search for “Wellington Transit map”, the best provider comes up as Eye of the Fish, rather than the plonkers at GWRC or whatever they are called this week. If you go to their website at Metlink, they don’t seem to offer any overall maps at all, either pre-change or post-change.

Come on, you complete and utter idiots at GWRC – post a transit map ! Honestly, how incompetent is Laidlaw and his bunch of boneheaded chums? This might be good for regular commuters, but its just a bunch of numbers for the rest of us:

Actually, on the remote chance that Metlink / GWRC is reading this, we need a lot more maps. Seriously, you need to assume that not everyone knows exactly what service they need. Ever heard of tourists?

In my mind, every single bus-stop needs a map – and especially all large locations like Willis St and Lambton Quay and Courtenay Place. A list of bus numbers is not a map.

This is the map that GWRC used when they were seeking feedback a couple of years ago – true, it is a bloody ugly map, but at least it graphically gets a message across, even if it got a big thumbs down on the Transit Maps website.

But in the absence of anything else appearing online, its all I’ve got. Come on GWRC, get your appallingly shoddy act together.

You’ve already removed the much-loved and totally green trolley-bus network, stupidly at least 6 months before you had a replacement service of a handful of new electric buses.

You’ve filled our city with shitty, belching, ex-Auckland throwaway diesels, which nobody wants. You’re replacing one bus system with another, but with bugger-all information about what it is.

Get. Your. Act. Together.

Here, below, lifted direct from the officials, is the new numbers:

*The 21 will include an all-day, high-frequency service between Courtenay Place and Kelburn Parade.