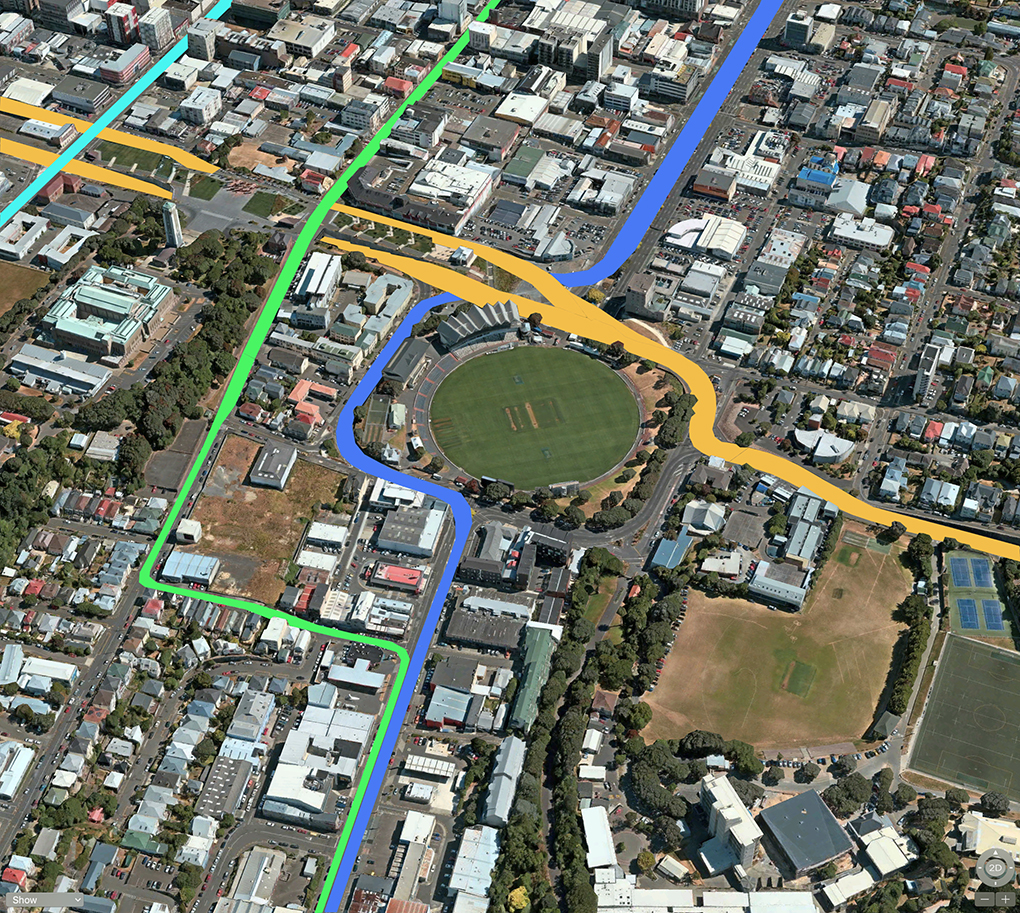 For over four years now the capital city of New Zealand has been waiting for the so-called group of experts to give us an answer on the future of public transport. LGWM have been conspicuous by their absence in providing any form of detail, at any part of the system. Yes, there is obvious bickering over the cost, the route, and even the type of system to be used, but one thing seems obvious to me: we need to make a start.

We need the planners of Wellington’s public transport future to put a stake in the ground – actually, no, we need them to put a whole line of stakes in the ground and then dig a trench along that line. But some things seem quite simple to me. There really is only one logical answer to some parts of the puzzle. And instead of starting at the beginning of the line, I’m going to start right in the middle, at the point which seems to annoy everyone the most. The Basin Reserve.

Every week for the last ten years, we’ve had smart-arses writing to the paper saying “just dig a hole under the Basin” and there has been at least one of those this week. You’re boring and you’re wrong. The answer is pretty much dead simple, and NZTA have known they were going to do this the day they lost the Basin Bridge enquiry. The picture above shows the plan – I believe the only possible plan – of what will, without a doubt in my mind, eventually happen at the Basin. Its all just so bloody obvious.

Yellow is the route that the vehicular traffic to and from the airport will take. It will follow much the same route as the doomed Basin Bridge, but instead of building a bridge 250m long and 8m high up in the air, it will descend from Mt Vic down to the ground level at the Basin, and then rise up to the Arras tunnel via the natural slope between Buckle St and Cambridge Tce. No big long bridge necessary – and it will just need a couple of small local bridges to achieve grade separation at the Basin. Job done. They could start this one tomorrow, it is so easy. You’ll notice that there is a second yellow stripe running parallel to the Arras Tunnel – that’s my pick for the new east-bound section of SH1. Again: fairly obvious, especially as the route sits there, empty and waiting. Not a single building needed to be knocked down to create this route.

Green is what I am proposing as the logical bike route into the city from places south. Trying to get a bike route round the Basin is fraught with challenges, and I think it is best to avoid it all. Make Tory St into a pedestrian and cycle-friendly street, following the route of the green path along a level of low-resistance. Imagine all the restaurants down Tory St being able to have seating outside on the footpath just so that they can turn into a proper European-style bistro.

Turquoise in the top left is my pick for the new Public Transport system – which for simplicities’ sake is just this: Light Rail up the centre of Taranaki Street. My guess is that it will cross over the Karo Drive traffic, and so there needs to be a major redesign. More details on this will be forthcoming (from Eye of the Fish) in the next few days and weeks.

Blue is the final colour, depicting both the main traffic route for cars and trucks, but also the route for buses, because one thing is for certain: there will still be buses as well as Wellington Light Rail. The blue path can fit in easily, and will cross over under the new SH1 routes, with two small 20m long road bridges. The cost for these will be minuscule compared to the cost of the big Basin Bridge that was proposed a few years back.

The rest of the roads I’ve left in their natural grey, as I believe there will be no change. They won’t, for example, take the Arch Centre’s proposal to green over the Dufferin St end of the Basin roundabout, as they don’t have the brains or the balls to make such a decision. It’ll stay as road – and with some clever redesign, somehow manage to sort out the ridiculous afternoon school pick up issues that arise from having several schools and a Governor General house all congregate at the same spot. But here at least they will now be separate from SH1 at last.

I haven’t adopted a second Mt Vic tunnel for cars, because it is not on the plans for at least another 10 years. It may or may not happen one day in the future, but for now: not happening. So for now, this is it. Logic tells me: this is it.

Are we all agreed?

Trackless Trams are a waste of money

What IS a Library?